So, I've read in a book recently that in ancient times a witch's power was thought to be derived from spirits, whether they be a familiar spirit or just a spirit manifested through invocation or evocation. In the newer, modern traditions of witchcraft, there seems to be this idea that a witch's power comes from within. This idea seems to state that the spell, ritual work, tools of the craft...all of it, is simply for show. A show intended to incite some sort of reaction from a latent part of your subconscious mind. I also read that witches from the old world would consider this idea laughable. My question is, what are your thoughts on this subject, and what have you read on the matter? Assuming of course you believe in witchcraft, in some aspect, do you believe that a witch/human must derive powers from some supernatural force (spirits), or do we as humans contain some inherent power, the power of thought, will and the mind that makes summoning a spirit to do your bidding unnecessary to perform spells, rituals?
Some could argue that a witch's ability to summon spirits, through complex ritual work, would be a testament in and of its self to this person's natural abilities at work.
Others would state that as beings of energy, soul, and mind we are connected to the "divine," or a universal source, and through meditative thought we have the ability to reconnect to that source of power and that is the power through which a witch exerts his or her will upon the physical world (thus rendering the use of spirits unnecessary).
So...thoughts?

I can’t say a lot about this. The topic of witches, creation, god ... is all too complicated for a forum post by myself, and minds are entirely too delicate, even malleable.

Your point, that we are all too connected to the divine, is of the greatest importance. I would advise against witchcraft, if I’m answering your question honestly, responsibly.

* Your point, that we are all connected to the divine.

(Sorry about that, ignore “too” in that sentence, in the first post.)

I believe there are several varieties of magic. I am more inclined toward inner magic but in this day and age it is harder for us to embrace extremes.

The way I see it Magick is defined as changing the world with accordance with your will.
The world can be the outside 1 or the inside 1..

From my experience in my life and work you need spiritual entities, physical tools, group work, timed work to magnify your personal power and change the outside 1..

Changing the inside 1, that's psychology, psychiatry and using spiritual tools..

What do you guys say?

Aug 11 2021
08:58:51 Aug 11 2021
Read 414 times
EstrangedOne
Well, quite frankly, on the personal level, I say "fuck psychiatry". To truly "balance" the chemicals of the brain, I don't think one should need the use of exterior chemicals. Psychology, on the other hand... well, therein lies the real trick of it all. To master the world around you, you have to master your own mind, and thus yourself.
As a genius of combat has said: "To wield the fear in others, you have to conquer your own, first."
Fear is the killer of one's own mind.

Mind you, obviously, I know others will have a different view, but That is mine.

If it exists, it's natural.

Witches get their energy from Mother earth, by using the 5 elements within. 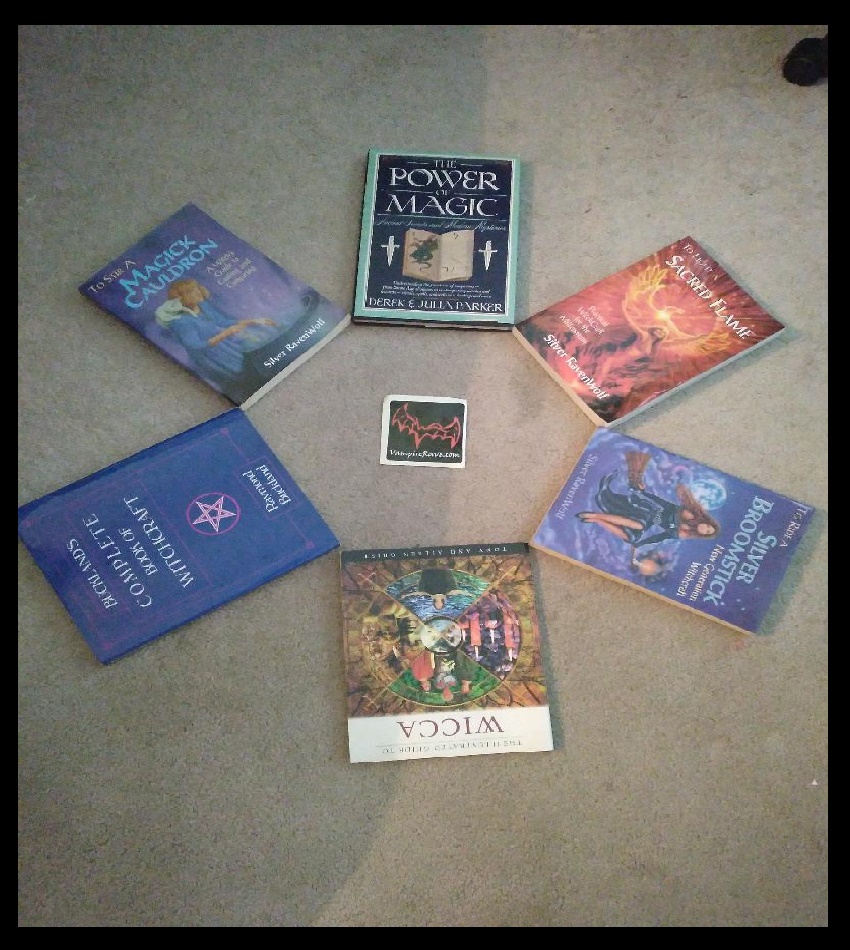 I can cast spells but do not need pomp and ceremony all I need do is draw enough energy from the living nature around me , trees, shrubs, etc then convert that energy into the spell, However the more complex the more exhausted I become so I think as far as I am concerned it is part external and part within me as well, I am a Dragon but not a fully awakened Dragon, I have not my memories of my kind nor do I remember how to do the things I do it just happens kinda like I am not the one controling it from happening.

Beware of all that you do, because once the door is opened, it does not shut with ease and you may receive more than you bargined for in the end. Ritual and ceremony are for your protection and any failure to follow ritual and ceremony may be to your detriment.

@Doru
The sad thing is just how correct you are, there... I've actually been subjected to the business end of something that I wasn't even supposed to be part of. And I was the one who had to put an end to it - needless to say, it was a Bitch (pardon the language Lol).

While I do believe that some people are born with a bit of something extra- whether it's the ability to call from within a power that is a connection of some divine being (or beings) or the adapted ability to harness the power found around them- I do not believe everyone has that ability or has the ability to acquire it, whether from an internal or external source. I think it has more to do with the ancestral background that breathes life into that aspect. Almost like genetics- your body has adapted to ways that were necessary for survival for your ancestral kin, thus passing along that strength until it is either adapted, dies out, or forgotten.

I also don't necessary believe it is all "supernatural". I believe a lot of the "power" harnessed, can be found merely within the sources provided around them- naturally occurring within a person and/or environment. There is a reason there are five elements; Water, Fire, Air, Earth, and Spirit: Each one of them can be used to survive and prosper and each one can kill you- all depending on how it is used.

Willpower is key in any kind of work. One can pray and perform purifications and even offer up sacrifices, but without a clear purpose and desired outcome it is all pointless. Fire can be lit, but without proper kindling it will die out.

I would say we humans are interlopers; We are a point within a liminal space. We are both corporeal and spiritual---we are aware of all that which our senses process, and can even be aware of that which lies beyond.

So it is with witchcraft and any sort of work that one must push through the veil---reach out into the cosmic power, fueled by one's own inner force.

I DO invocate and conjure thee, O four succubi consorts: Lilith, Mahalath, Agrat Bat Mahlat, and Naamah ; and being with power armed from the SUPREME MAJESTY, I do strongly command thee, by BERALANENSIS, BALDACHIENSIS, PAUMACHIA, and APOLOGIAE SEDES; by the most Powerful Princes, Genii, Liachidæ, and Ministers of the Tartarean Abode; and by the Chief Prince of the Seat of Apologia in the Ninth Legion, I do invoke thee, and by invocating conjure thee. And being armed with power from the SUPREME MAJESTY, I do strongly command thee, O four succubi consorts: Lilith, Mahalath, Agrat Bat Mahlat, and Naamah by Him Who spake and it was done, and unto whom all creatures be obedient. Also I, being made after the image of GOD, endued with power from GOD and created according unto His will, do exorcise thee by that most mighty and powerful name of GOD, EL, strong and wonderful; And I command thee and Him who spake the Word and His FIAT was accomplished, and by all the names of God. Also by the names ADONAI, EL, ELOHIM, ELOHI, EHYEH, ASHER EHYEH, ZABAOTH, ELION, IAH, TETRAGRAMMATON, SHADDAI, LORD GOD MOST HIGH, I do exorcise thee and do powerfully command thee, four succubi consorts: Lilith, Mahalath, Agrat Bat Mahlat, and Naamah, that thou dost forthwith appear unto me here before this Circle in a fair human shape, without any deformity or tortuosity. And by this ineffable name, TETRAGRAMMATON IEHOVAH, do I command thee, at the which being heard the elements are overthrown, the air is shaken, the sea runneth back, the fire is quenched, the earth trembleth, and all the hosts of the celestials, terrestrials, and infernals, do tremble together, and are troubled and confounded. Wherefore come thou, O four succubi consorts: Lilith, Mahalath, Agrat Bat Mahlat, and Naamah, forthwith, and without delay, from any or all parts of the world wherever thou mayest be, and make rational answers unto all things that I shall demand of thee. Come thou peaceably, visibly, and affably, now, and without delay, manifesting that which I shall desire. For thou art conjured by the name of the LIVING and TRUE GOD, HELIOREN, wherefore fulfil thou my commands, and persist thou therein unto the end, and according unto mine interest, visibly and affably speaking unto me with a voice clear and intelligible without any ambiguity to suffer those of whom doubt your power.

HEAR MY COMMANDS OR SUFFER THE VIBRATION OF DIVINE NAMES FOR ETERNITY.

SUCH ARE THE WORDS… ~BOWS~

Looking at this from the viewpoint of a parapsychologist, humans have something called PK, or psychokinesis. It's like electromagnetic pulses that occur from firing of neurons. Some can learn to amplify this, and this causes telepathy in a sense, which is where levitation and such come into play. So it's quite possible that witches at the time, as well as modernly, use PK as a source of their magic. I personally am a practicing witch and I don't discount that as an option.