Cartomancy is fortune-telling or divination using a deck of cards. Forms of cartomancy appeared soon after playing cards were first introduced into Europe in the 14th century. Practitioners of cartomancy are generally known as cartomancers, card readers, or simply readers.[From Wiki]

Tarot is the most well known form of cartomancy, as it is often depicted in movies with witches or fortune tellers. It is a great tool for divination but can also has many other applications(I often use mine for decision-making, working through thoughts and feelings, or for direction and insight.) The cards are very versatile and they are loved by many for how detailed and accurate they can be. You can also play games with them, although many wouldn't consider doing so with the decks they use for divination. While there have been a variety of decks created, standard modern tarot decks are based on the Venetian or the Piedmontese tarot. It consists of 78 cards divided into two groups: the major arcana, which has 22 cards, also known as trumps, and the minor arcana, which has 56 cards.
The 22 cards of the major arcana each depict an archetype, force, character, virtue, or vice. The 56 cards of the minor arcana are divided into 4 suits: Wands, Cups, Swords, and Pentacles(or coins[some decks use other words to describe the suites, often related to the original, such as batons for wands]).
The suits each contain a King, Queen, Knight, Jack, and Numbers 1-10. Often the Jack is switched out to be a Princess or Page, the Page being the most popular for that position and Ace is the term used for number one cards.

The cards of the major arcana refer to spiritual matters and important trends in the questioner’s life. The major arcana often depicts pivotal events and carry much more weight individually than minor cards. In the minor arcana wands deal mainly with business matters and career ambitions, cups with love, home and emotions, swords with conflict, and coins with money and material comfort(these suits have many more attributes, but we aren't going into them now.)

"The cards of the Minor Arcana generally concern themselves with the day-to-day business of life. This is not to say that they aren’t important, just that they represent the people, tasks, decisions, and events that fill our everyday experiences. These are the small details that add color and texture to the big picture of our lives."

Lenormand has been compared to tarot and while they have a few similarities they stand on their own as two very distinct forms of cartomancy.

-Cartomancy with Playing Cards-
Cartomancy using Playing Cards isn't necessarily referred to as anything besides Cartomancy, but to keep things less confusing I always state that I am using "a form of Cartomancy using Playing cards" when asked or when referring to it or writing about it. Referring to this form of Cartomancy as "Divination with Playing cards" can work as well. If there is a term out there or one that would make more sense, let me know.
Cartomancy with Playing cards is exactly what you imagine it to be and there are countless ways under the sun that these cards can be used in divinatory ways. Of all of the ways to shuffle, cut and read your cards, but I will only be explaining two here. The meanings of the cards can be found by reading below.

1. Cartomancy by reading pairs:
In this method, you will be reading your cards by shuffling your deck and pulling only pairs of like numbers or suits for your reading. This way of reading is good for general readings. If you don't know where to start or what to ask your deck, or you just want your deck to tell you what's going on, this is a good method to use and it is very simple.

Instructions:
-Grab the deck of playing cards you wish to use(this deck of cards should have never been used for another purpose(but if they have and you can't afford to get a new deck right now, you can cleanse the deck for cartomancy by using incense or by any other means you're familiar with that won't harm cards. Meditating while holding the deck and visualizing while stating or thinking clearly of the purpose for its further use can consecrate the deck for divination purposes)and will be used only for your readings in the future, so make sure it is consecrated and it will be ready for readings.

-To begin, mentally think of your question and intent for the reading while shuffling your deck three times, then tap it thrice. Part the cards into two stacks then hold them, visualizing your energy and intent for the reading influencing the cards to give you the answers you seek.
-Put the two stacks back together once more to become one and shuffle once more, always visualizing and keeping the question in mind.
-Starting from the top, flip every card over so it's face up. Every time you get two of the same card in a row, set them aside in the order that you pulled them from the deck. Keep doing this until you have passed through the entire deck.

-Look to the doubles you have pulled and interpret them as follows:
-Kings: represent money and business. If they are of different colors, expect some delays or losses. The King of Spades, facing right, is especially foreboding in this area. Same color suits predict favorable finances or good luck in the home or business.

-Queens: represent lovers. If they're facing to the left, they are loyal; to the right means they aren't telling the truth or they're hiding something. Red cards enforce loyalty, but black suits further deceit. If the suits are different colors, there is difficulty in the relationship. If one is the queen of spades, there's been infidelity. Different colors can also mean a different lover, such as a new person or one other than the current lover.

-Jacks: represent jealousy from other people. Someone doesn't always keep you in good thoughts, and they can be further found based on the suits. Matching suits shoes that it's a close friend who is jealous, while different colored suits means that it's a stranger, enemy or other. The enemy can be seen for sure should the jack of spades rear its ugly head in any combination. This can also be indicative of the "pewter"(evil eye) being present.

-Tens: represent dreams and desires either fulfilled or thwarted based on other cards. If both cards are red, your endeavors will prosper; if they're both black, they will fall short or be interrupted. If the pair is different colors, it can mean indecisiveness or hesitation.

-Nines: trouble, turmoil, or strife is coming. In a reading to figure out the cause of a situation, this can mean witchcraft or conjuring has occurred. If both are red, this means there's trouble in the home, in a relationship, or with one's health or business; if they're both black, there's trouble in spiritual matters. If they're different colors, then its folk name "the pallbearers" comes into play, meaning something needs to be taken care of-loose ends need to be tied up or someone needs to "bury the hatchet."

-Eights: sorrow is coming. This can also be related to depression, break-ups, job loss, etc. For example, two different-color kings, two sixes, and two rights would propose a possible job and financial loss. The colors of each would further determine the severity of the meaning.

-Sevens: mean there is protection and safety under "God's lucky number." Sevens also represent tears, worry, waiting, and blood, though. If a spade appears, then you're at risk. Two sevens, one a spade, can also mean you have lost something dear.

-Sixes: represent bad news, particularly if the six of spades is one of the pair. If it is the left card, then it's not too serious; if it's on the right side, the bad news is serious. The color of the suits determine what person the news will come from, as explained below in fives.

-Fours: represent travel- either coming or going. Different suits mean the person will travel to "strange ground," while matching colors represent traveling to a place visited before.

-Threes: foretell bad luck, based on what cards they are paired with and how it will come. If a pair of different colored fours appears with a pair of black threes, it is a warning against travel or large crowds, pointing to possible arguments, accidents, or violence with a four of spades present. Otherwise, it will be trouble with family for hearts, with friends for diamonds, and with business for clubs.

-Twos: represent good fortune. Again, further information is determined by the other pairs of cards present.

-Aces: represent love. It could be love of friends, family, or lovers. If the pair is a heart and a spade, there's heartbreak or it won't last. A spade and a club indicate abuse or addiction. A heart with a club means frequent fighting or distance. A heart and a diamond means that they're a match, but there are some rough edges. A diamond and a club means all is well. Finally, a spade and a diamond mean an ending or death.

To close the reading, shuffle the deck thrice and put away out of sight until its next use.

2. Cartomancy by pulling single cards or creating "spreads:"
For this method of cartomancy, pulling pairs of like numbers/suits isn't required. If you want to ask specific questions of your deck, pull cards for spreads, or just want to pull a "card of the day" for general guidance, this method is for you, as each card's individual meaning is used, rather than just by suits, number and color.
This method can be done like you'd read tarot, but if you aren't familiar with tarot, just do as I suggest.

Instructions:
Shuffle your cards for as long as you wish and pull cards as your spread or reading suggests. For example, let's say we are doing a 3 card reading for your day, where the first represents morning, the second is noon, and the third is evening.
Shuffle your deck, cutting it into two only if you wish. I would shuffle until intuition tells me to quit and pull my three cards as intuition tells me(otherwise pull from the top of your deck.)
Lay out the cards side by side and start your reading..


(While I have added a trove of knowledge to get one started and going on the path of reading playing cards, there is still some knowledge left to add, so stay tuned. Don't be afraid to practice, ask questions, and research, as these are the best ways to learn. Don't forget to use your intuition and read with and open mind.
As of now, this will be continued...-Amaranthine aka NikkiAidyn) 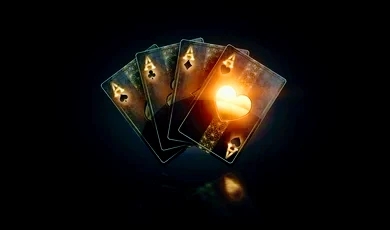