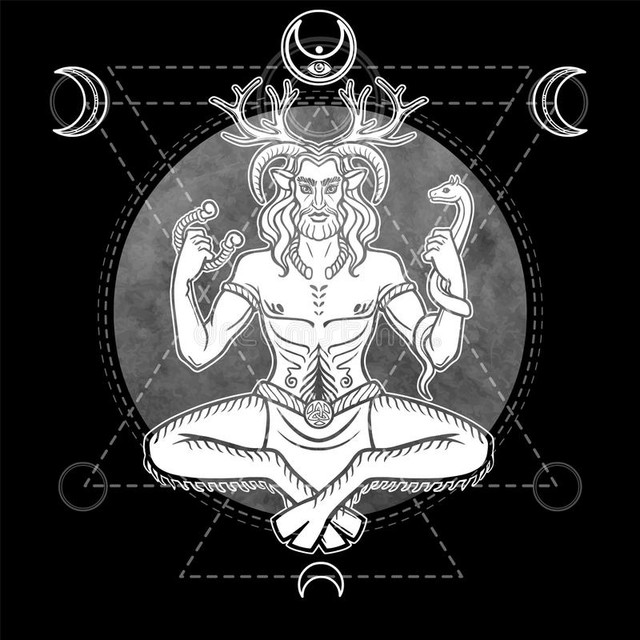 Cernunnos("horned one" in Latin) or the Horned God (a 20th century syncretic term for a variety of horned beings that predates Wiccan use) of hunters and lord of animals and is most often associated with the Celts and Ireland, though images of the deity have been found all across Europe. God of hunters and often called Master of the Hunt, Cernunnos was seen as the depiction of man as the ultimate predator and was an important deity to people who relied heavily on hunting for food. Perhaps the most important deity in the Celtic religion (if his numerous appearances on the art of the time show) Cernunnos is a wild-haired and bearded man frequently shown as wearing or having antlers or horns, wearing a torc (metal neck rings and/or arm rings twisted decoratively and in such a way as to be permanent, jewelry similar to the silver necklaces the Vikings wore) around his neck and one in his hand, the other hand holding a long snake with a ram's head. Cernunnos was the protector of the forest and animals are almost always shown accompanying him.

The antlers and sometimes hooves of Cernunnos are characteristic of the stag (lord of the forest and a being of strength, speed, and virility); Antlers are shed annually and embody regeneration, often carved into phallic amulets (perhaps phallic due to antlers and horns symbolizing male fertility). Cernunnos's cross-legged posture led many to think of the Buddha, but it is similar to how people in the area would sit and did not appear to hold any further symbolization. The torcs that Cernunnos wore around his neck and held in his hand signified Celtic nobility and he would sometimes also be depicted holding a bag of coins and a cornucopia. Associated with the oak tree, a symbol of wisdom and stability, Cernunnos also represents nature, flora, fauna, fertility, and prosperity. Most known for his association with stags, he was also affiliated to horned serpents, dogs, bulls, and rats. 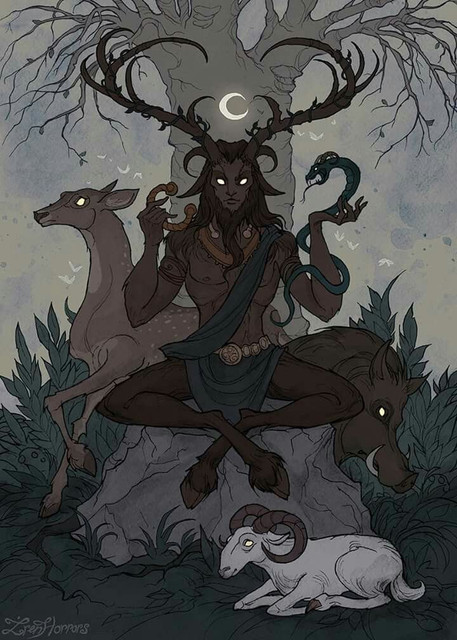 A silver cauldron was unearthed in Denmark in 1891, left there for an indescribable amount of time. An antlered figure sits, legs crossed, with a torc around his neck and another in his hand; In the figure's other hand is a long snake with a ram's head. The figure, one of the most recognized depictions of Cernunnos, is surrounded by a stag(who has the same antlers as Cernunnos), a deer, five strange animals, and a small figure riding what may be a dolphin. These are some of many figures on the Gundestrup Cauldron, a piece likely made in the Balkans the 1st century BCE. 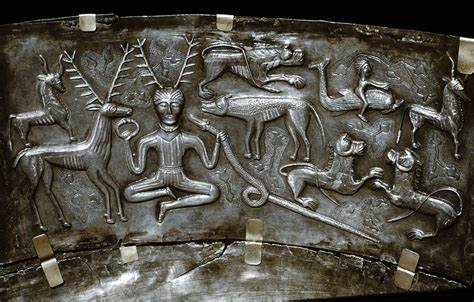 One of the earliest recognized images of the god was found in Italy and dated to the 4th century BCE, but a cave painting found in France and dated back to approximately 15,000 years ago is theorized to represent Cernunnos. The painting, named "The Sorcerer," is of an upright antler-adorned figure resembling Cernunnos. The question of whether the cave painting depicts Cernunnos or just a person wearing the skin and antlers of a deer has not been answered, but if the painting is a representation of the god, it is the oldest discovered. The questions surrounding Cernunnos can best be summarized by Historian MacKillop, who notes, "Knowledge of Cernunnos is so tenuous that he may not be a divinity at all but rather a shaman-like priest with antlers affixed to his head." The people in Europe around the 4th century BCE(when the oldest recognized depiction of Cernunnos was created) passed their information down orally. So Cernunnos could very well have been a god in certain cultures, but not much is left behind illustrating Cernunnos, let alone anything to describe him or his role to the people.
According to other ancient "authors" and Celtic art, it is very likely animals and perhaps even humans were sacrificed in Cernunnos' and other gods' honor. Sacrifices were mostly done on behalf of their gods, so it's very likely that the horned deity was a god to certain groups.

Cernunnos is theorized to originate in Celtic tradition and over fifty other depictions of the god sprang forth around the same time in the northeastern area the Romans called Gaul. Many different cultures and regions had beings similar to Cernunnos, so maybe Cernunnos was the inspiration for many antlered deities around in later years.
For example, those in India and Nepal worshiped Pashupati, incarnation of Shiva and "Lord of Animals" and Nigerians of the Igbo people and Odinani religion worshipped Ikenga, a horned god of honest achievement.
A Romano-British local deity and war-god to the people of the region near Hadrian's wall, Cocidius was another horned being. Associated with warfare and the woodland, he was worshipped by the military and lower-class alike.
Cernunnos may have also inspired Christianity's horned version of the devil. Christians deemed much of what Pagans believed and worshiped as evil and turned many of the Pagan deities into devils of a more evil nature, to inspire people to turn away from them and towards the Christian God.
(There are countless other depictions of the Horned God in other places across the globe, a being that people have connected to throughout time; Cernunnos is a universal symbol, in a way).

Cernunnos is celebrated in Wicca, different Pagan groups and other cultures today as witchcraft, paganism and older cultures are receiving more attention and devotion. 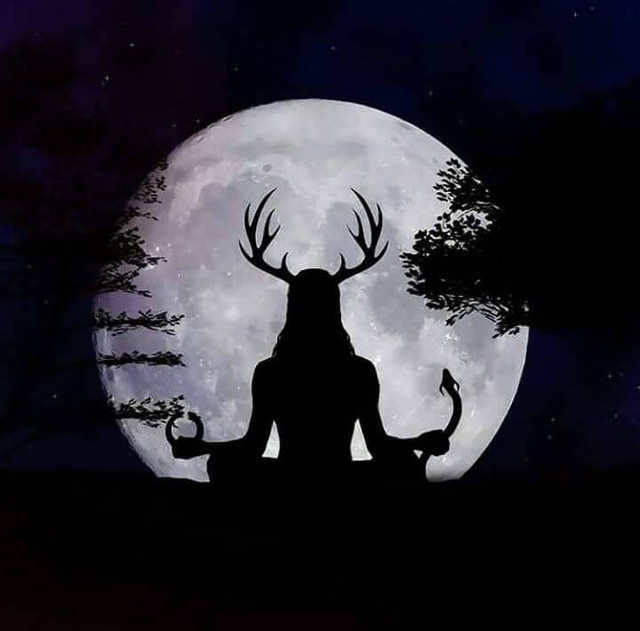