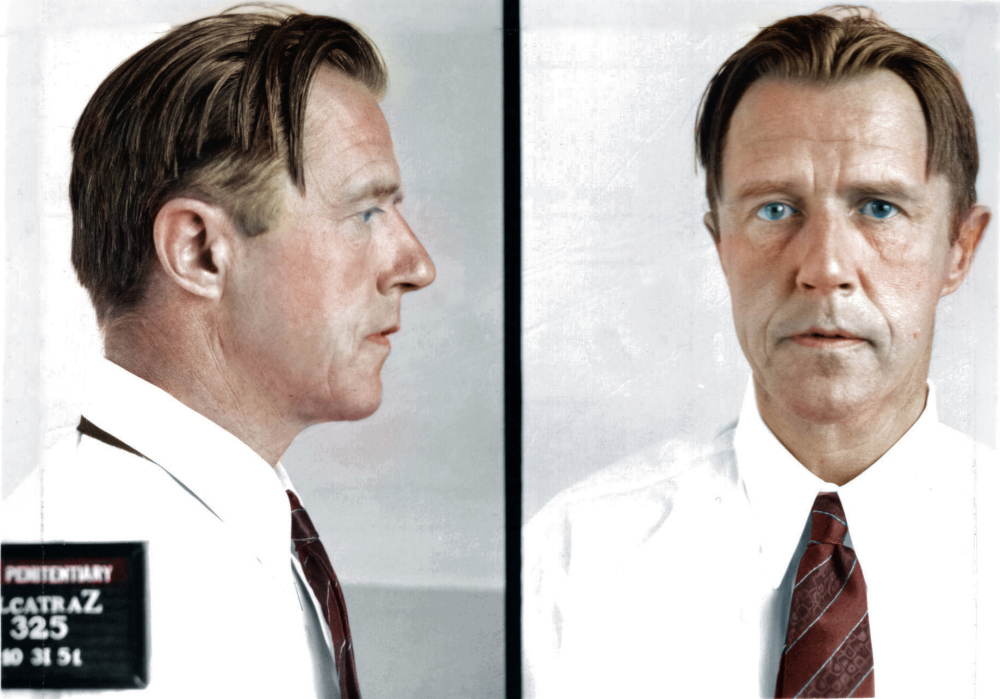 Alvin Francis "Creepy Karpis" Karpowicz (August 10, 1907 – August 26, 1979), born Alvin Karpowicz, better known as Alvin Karpis and nicknamed "Creepy" for his sinister smile, was an American criminal known for his alliance with the Barker gang in the 1930s. He was the last "public enemy" to be taken.

Karpis was born to Lithuanian immigrants in Montreal, Quebec, Canada, and was raised in Wichita, Kansas. He started in crime at about age 10 running around with gamblers, bootleggers, and pimps. In 1926, he was sentenced to 10 years at the State Industrial Reformatory in Hutchinson, Kansas, for an attempted burglary. He escaped with another inmate Lawrence De Vol and went on a year-long crime spree interrupted briefly while he lived with his parents after De Vol was arrested. After moving to Kansas City, Missouri, he was caught stealing a car and sent back to the Reformatory. Transferred to the Kansas State Penitentiary in Lansing, Kansas, he met Fred Barker who was in prison for bank burglary. Barker was one of the notorious members of the "Bloody Barkers" as the newspapers of the time had called them. The Barker family included the brothers Herman, Lloyd, Arthur or "Doc," and Fred, the sons of Ma Barker. Growing up impoverished in a sharecropping family, all the boys soon turned into hardened criminals, robbing banks and killing without provocation. Doc was sentenced to life imprisonment in 1920 after murdering a night watchman. Herman committed suicide on August 29, 1927, after being badly injured in a shootout with police in Wichita Kansas following the robbery of the Newton Ice Plant in Newton, KS with Charles Stalcup and Porter Meeks. Lloyd was sentenced to 25 years in 1922, for mail theft and released in 1938; he was a US Army Cook at a POW camp and then was murdered by his own wife in 1947. Ma did her part to help her sons. "Ma" Barker was not herself a criminal, she did nevertheless badger parole boards, wardens, and governors for the release of her boys when they were incarcerated. After Alvin was released in 1931, he joined up with Fred Barker in Tulsa, Oklahoma, and they soon put together the Karpis-Barker gang.

The Karpis-Barker gang became one of the most formidable criminal gangs of the 1930s. They did not hesitate to kill anyone who got in their way, even innocent bystanders. They robbed a number of banks, hijacked mail deliveries, and soon turned to the lucrative field of kidnapping. In 1933, they kidnapped William Hamm, a millionaire Minnesota brewer. His ransom netted them $100,000. Shortly after this, they abducted Minnesota banker Edward Bremer, Jr., whose ransom brought them $200,000. The group was led by Alvin, who had a photographic memory and was described as "super-smart" by fellow gang member Fred Hunter. The other leaders were Doc and Fred, both now out of prison, and the gang included about 25 others. At this time a myth was started that Ma Barker ruled the gang with an iron fist, but the facts do not seem to support these claims. It is highly unlikely that criminals as adept as Karpis, and even Ma's sons for that matter, would have listened to her. Karpis later wrote about this subject in his memoirs:

"Ma was always somebody in our lives. Love didn't enter into it really. She was somebody we looked after and took with us when we moved city to city, hideout to hideout. It is no insult to Ma's memory that she just didn't have the know-how to direct us on a robbery. It would not have occurred to her to get involved in our business, and we always made it a point of only discussing our scores when Ma wasn't around. We'd leave her at home when we were arranging a job, or we'd send her to a movie. Ma saw a lot of movies."

Harvey Bailey, another well-known bank robber of the era knew the Barker gang well, and in his autobiography published in the 1970's, he agreed with Karpis, observing that Ma Barker "couldn't plan breakfast", and was certainly no mastermind behind any gang activity. Ma Barker's entire reputation as a criminal mastermind was concocted by Hoover to protect the FBI's public image after federal agents discovered they had killed a 62 year old mother.

The kidnappings, however, would lead to the gang's end. The father of the kidnapped Edward Bremer Jr. was a friend of president Franklin D. Roosevelt. FDR had even mentioned the kidnapping in one of his fireside chats and, fueled also by the Lindbergh kidnapping, the FBI and local police bureaus greatly stepped up their pursuit of those engaged in these types of crimes. The FBI had by this time organized a group of highly skilled agents called the "flying squads" who specialized in hunting down the leading public enemies, and much progress was being made. The year 1934 alone saw the deaths of John Dillinger, Bonnie and Clyde, Charles "Pretty Boy" Floyd, Lester "Baby Face Nelson" Gillis, John "Red" Hamilton, Homer Van Meter, Tommy Carroll, and Eddie Green.

Just after Ma and Fred's death on January 16, 1935, Karpis nearly met his own violent end when the FBI located him in Atlantic City, New Jersey. Karpis and Harry Campbell managed to shoot their way to an escape, though Karpis's eight-month-pregnant girlfriend Dolores Delaney was hit in the thigh by a wild shot fired by Campbell. He continued his crimes with others, but had to be on the move more than ever as he was the fourth and last Public Enemy left (the previous three having been killed). He did manage to pull off a crime that echoed times of the "Old West," a train robbery in Garrettsville, Ohio, which netted $27,000. After the death of Ma and Fred, Karpis sent word to J. Edgar Hoover that he intended to kill Hoover the way Hoover had killed Ma and Fred.

Pursuit and Capture by the FBI

The FBI had come a long way since its reorganization and renaming in 1935 (from the Bureau of Investigation, created in 1908). J. Edgar Hoover was appointed as the acting head of the Bureau in 1924 and completely transformed the agency. Despite its successes, however, the agency had many problems. In those days, when the application of science and technology to fight crime was still in its infancy, the agency was at the mercy of public citizens for information. Often agents were sent off to remote locales that turned out to be red herrings due to bad information. The personal low-point for Hoover came at an April 1936 United States Senate hearing. Tennessee Senator Kenneth D. McKellar lambasted Hoover for the performance of the FBI and the fact that Hoover himself had never personally arrested anyone. After the hearing a determined Hoover vowed he would capture Karpis personally.

Hoover would not have to wait long. On May 1, 1936, the FBI located Karpis in New Orleans, and Hoover flew in to be in charge of the arrest. As a dozen or so agents swarmed over Karpis's car, Hoover announced to Karpis that he was under arrest. A couple of versions of the arrest are reported. Karpis' version of the story told in his memoirs was that Hoover came out only after all the other agents had him seized. Only then did the agents call to Hoover that it was safe to approach the car.The official FBI version states that Hoover reached into the car and grabbed Karpis before he could reach a rifle in the back seat. (In fact, the car, a Plymouth coupe, had no back seat.) The whole fiasco was further aggravated when Hoover told his men to "put the handcuffs on him." Not one agent had brought handcuffs as federal agents had planned on killing Karpis as they had the other public enemies. Karpis was tied up with the necktie removed from an agent's neck. The capture of Karpis catapulted Hoover's name into the public eye, and that name would be synonymous with law enforcement until he died in 1972 at the age of 77.

The capture of Karpis essentially ended the age of the big-name depression-era criminals. In addition to those mentioned earlier, others killed violently in the 1930s were Jack "Legs" Diamond, Vincent "Maddog" Coll, Frank "Jelly" Nash, Dutch Schultz, and John Dillinger. Al Capone was in Alcatraz and slowly going insane from syphilis. The country had gradually started to recover from the Great Depression and economic times had improved, and law enforcement agencies had improved as well.

Sentenced to life imprisonment, Karpis was incarcerated at U.S.P. Alcatraz from August 1936 to April 1962, although he did enjoy a short absence from Alcatraz during a six-month transfer to U.S.P. Leavenworth in 1958. Karpis served his time quietly at Alcatraz, though he was considered far from being a model inmate by correctional officers. Former Alcatraz Officer Al Bloomquist called Karpis a mild nuisance, and described him as an inmate who complained frequently about the conditions, and one who fought constantly with fellow inmates. He was known as an obsessive reader and held numerous positions in the Alcatraz industries and a kitchen assignment. It is rumored that when baseball games were broadcasted inside the cellhouse in the late 1950s, Karpis would bellow in laughter when the Hamm’s jingle played during commercial breaks. While Karpis is renowned for being the prisoner with the longest sentence at Alcatraz, he never attempted escape. In April 1962, with Alcatraz in the process of being closed, he was transferred to McNeil Island Penitentiary in Washington State.