Pugs were chosen to be this covens representation because they are my favorite breed of dog. I think they are adorable! They were also chosen because of the kinds of dogs they are, they are adaptable to many environments and can come with different personalities which to me makes them even more special. The most adorable thing about them is their tongues sticking out.

The Pug is a breed of dog with a wrinkly, short-muzzled face and curled tail. The breed has a fine, glossy coat that comes in a variety of colors, most often fawn or black, and a compact square body with well-developed muscles.

Pugs were brought from China to Europe in the sixteenth century and were popularized in Western Europe by the House of Orange of the Netherlands, and the House of Stuart. In the United Kingdom in the nineteenth century Queen Victoria developed a passion for Pugs which she passed on to other members of the Royal family.

Pugs remain popular into the twenty-first century, with some famous celebrity owners. A Pug was judged Best in Show at the World Dog Show in 2004.

The breed is often described as multum in parvo, or "much in little", alluding to the Pug's remarkable personality, despite its small size. Pugs are strong willed but rarely aggressive, and are suitable for families with children. The majority of the breed is very fond of children and sturdy enough to properly play with them. Depending on their owner's mood, they can be quiet and docile but also vivacious and teasing. Pugs tend to have a lazy nature and spend a lot of time napping. They are often called "shadows" because they follow their owners around and like to stay close to the action.

Pugs bark out of an instinct to protect you and the house, even if you do not see or hear a threat. While this breed is not one of the better known watchdogs; a Pug has a strong sense of territory and family and will guard his owners even if that only means barking as a warning defense. Often owners do not believe this is the cause since they do not see any people. cars or animals nearby. However, your dog has exceptionally better hearing than you do; he or she may be hearing a noise that he perceives to be a danger.

Most have a very deep bond with their owners, wanting to sleep in their human's bed. Since this is the largest of all toy sized breeds, an adult can take up a good amount of room and may snore in his owner's ear, but will be much happier than if left in another room.

This breed does best when the following is offered: 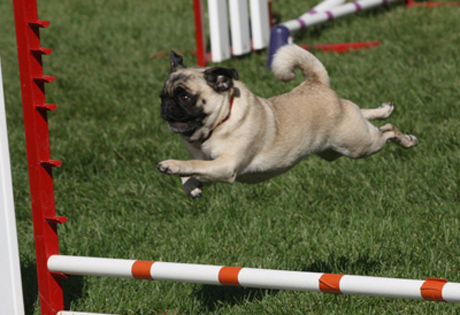 Please remember that this breed is not an outside dog. A Pug should never be left outdoors, unattended, for any amount of time. If you are a sucker for a cute face with wrinkles, a dog that shows emotions and an affectionate companion this breed is for you.

Though wikipedia will tell you otherwise, in my experience so far of raising Pugs I've not had any major medical issues with either of my pug babies. You can view a complete list of common and major medical problems pugs could potentially have on wikipedia but there is no guarantee that your pug could have a single problem especially when they are properly taken care of! Yes they need extra care and attention but what puppy doesn't? If you can't take of a dog properly you shouldn't have one. Dogs are a lifelong commitment!

Page best viewed with font Cutie Patootie which can be downloaded from dafont.com.