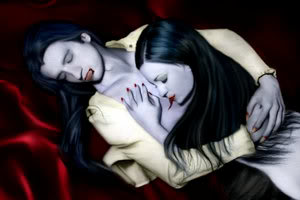 A young man wished to purchase a gift for his new sweetheart's birthday, and as they had not been dating very long, after careful consideration he decided a pair of gloves would strike the right note - romantic, but not too personal.

During the wrapping, the clerk mixed up the items and the sister got the gloves and the sweetheart got the panties.

Without checking the contents first, he sealed his package and mailed it to his sweetheart along with this note:

I chose these because I noticed that you are not in the habit of wearing any when we go out in the evening.

If it had not been for your sister, I would have chosen the long ones with buttons, but she wears short ones that are easy to remove.

These are a delicate shade, but the lady I bought them from showed me the pair she had been wearing for the past three weeks and they were hardly soiled. I had her try yours on for me and she looked really smart.

I wish I were there to put them on you for the first time, as no doubt other hands will come in contact with them before I have a chance to see you again.

When you take them off, remember to blow in them before putting them away as they will naturally be a little damp from wearing.

Just think how many times I will kiss them during the coming year. I hope you will wear them for me on Friday night.

P.S. The latest style is to wear them folded down with a little fur showing.

Your on a roll here girl lol

Is what you get when you give head

Unpleasant as it tends to be

Be grateful that he doesn't pee

you bothered reaching for his fly

But it's too late, can't be a tease

Accept the facts, get on your knees

You know you've got a job to do

So open wide and shove it through

Lick the tip then take it all

Slide up and down, use your tongue

And feel the precum start to run

Just, when you can't take anymore

You hear your lover's mighty roar

And when he hits that real high note

You feel it oozing down your throat

Let's switch you say, before you gag

And what's your revenge, your on the rag

Suddenly the younger brother (on the bottom bunk) said

"Could you stop making sandwiches your getting mayonase on me"!


A lady called her gynecologist, and asked for an "emergency" appointment. The receptionist said to come right in. She rushed to the office, and was ushered right into an examination room. The doctor came into the exam room and asked about her problem.

She was very shy about her emergency problem, and asked the gynecologist to please examine her vagina.

"I'm not sure I can afford it," sighed the young woman. "But while I am here could you just replace the batteries? "

A hippie gets onto a bus and sits next to a nun in the front seat. The hippie looks over and asks the nun if she would have sex with him.

The nun, surprised by the question, politely declines and gets off at the next stop. When the bus starts again, the bus driver says to the hippie, "If you want, I can tell you how you can get that nun to have sex with you."

The hippie of course says that he'd love to know, so the bus driver tells him that every Tuesday evening at midnight the nun goes to the cemetery to pray to the lord. "If you went dressed in robes and some glowing powder," says the bus driver, "You could tell her you were God and command her to have sex with you."

The hippie decides to try this out. That Tuesday, he goes to the cemetery and waits for the nun. Right on schedule, the nun shows up. While she's in the middle of praying, the hippie walks out from hiding, in robes and glowing with a mask of god. "I am God, I have heard your prayers and I will answer them but you must have sex with me first," he says.

After the hippie finishes, he rips off his mask and shouts out, "Ha ha, I'm the hippie! "

The nun replies by whipping off her mask and shouting, "Ha ha, I'm the bus driver!"

An armless man in a long jacket walks into a bathroom and stands by a urinal...

Soon seeing he needs help to use the toilet he asks a closeby man, " Can you help me point my penis" ?

The man reluctantly accepted but, decided not to look at the mans penis. After a few seconds of holding it he thinks, " Hey! I'm grabbing it right"? " So I should look, I have a right"!

He looks down at the mans member and sees that is beyond hidious. Startled he jumps back and lets go, asking. " What the hell is wrong with it ?"

The "armless" man pulls his arms out of his jacket and says "I dunno, but, I ain't touchin' it." and walks away.

John, woke up after the annual office Christmas party with a pounding headache, cotton-mouthed and utterly unable to recall the events of the preceding evening.

After a trip to the bathroom, he made his way downstairs, where his wife put some coffee in front of him.

"Louise," he moaned, "tell me what happened last night. Was it as bad as I think?"

"Even worse," she said, her voice oozing scorn. "You made a complete ass of yourself. You succeeded in antagonising the entire board of directors and you insulted the president of the company, right to his face."

"I did. You're back at work on Monday.

A mother is in the kitchen making dinner for her family when her daughter walks in.

“Mother, where do babies come from?”

The mother thinks for a few seconds and says, “Well dear, Mommy and Daddy fall in love and get married. One night they go into their bedroom, they kiss and hug and have sex.”

The daughter looks puzzled so the mother continues, “That means the daddy puts his penis in the mommy’s vagina. That’s how you get a baby, honey.” The child seems to comprehend.

“Oh, I see, but the other night when I came into your room you had daddy’s penis in your mouth. What do you get when you do that?”

LMAO i love these Winter

thanks guys...glad you all enjoyed them