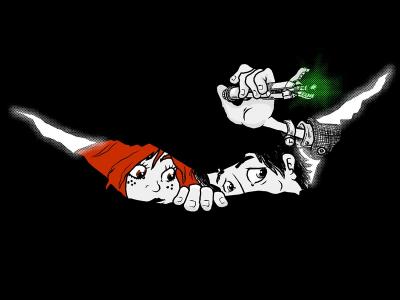 How had she allowed herself to end up here she wondered? The tears flowed quite freely, and for the first time in her life she wasn’t sure when they would stop.


It had started as a mere game, something fun to preoccupy her time as an outlet for her creative nature that in some strange twist had been put on hold. Within the forums of the internet site she found her voice again, remembered the arguments of her youth and that internal spark. Addicted, she found her imagination suddenly in charge of her waking and nocturnal life. She felt like she was flying.


Ageless she felt online, without the bounds that reality seemed desperate to confine her in. In her roaming she had also met like-minded individuals that fed that spark, encouraged the outpouring of words until she heard her voice again.


He found her right as she was starting to feel her strength return, an affirmation of the changes this cyber world created in her real life. She was becoming more productive than she had been in years, tearing down the old warn self to implement the woman she had often dreamed of being. To start their messages were full of curiosity and playful banter, a spark seemed to be there. His outlook varied so great from her own, but she could not deny the logic or reason he believed as he did. Her own life had similarities in that others often did not understand her reason or purpose behind her actions. They were there and very real to her, like she was following a thread only she could see and feel.


This all changed, came to a crashing halt when he called. His voice consumed her brain and she found herself not listening to his words but the texture of his voice. She lost all other sensations when he spoke. Looking back she wondered as to what she said that continued their conversations as she felt all wit and intelligence stop. Mesmerized is a good word for the feeling. The timbre seemed to envelop, suffocate and console her. Similar to how just enough chest hair over firm pectorals creates sensations of velvet, leading to bestial thoughts.


As the days turned into months, she found herself longing for his calls and distraught on the days they couldn’t occur. More and more of her dreams seemed to involve a passion that she never understood. Conversations turned to more allegory and innuendo. A hint, tease and promise all at once. In daydreams she found herself wondering as to his size, shape, was he circumcised? What would he smell like? In the morning was his face rough or did his facial hair have a light-teasing feel? Forbidden these thoughts should be. He had told her what he was, how he played his game.


Yet she found herself falling, becoming trapped by his essence. Would his physicality overwhelm her as well? No remember, you know the difference. Not real, none of it. Truly this is just a friend someone who can see and understand. While she told herself these lies, she could almost feel a well-placed kiss just to the right of the mole on the back of her neck. A smell of heated flesh just behind, and then it was gone.


The day of their meeting she didn’t know how to react. She had prepared to go out with him into a nightlife that she hadn’t really experienced since her youth. Making certain her choice of clothing was appropriate had been difficult after all those years of living in her head. She didn’t remember how to dress it seemed and she so wanted to impress him. The evening had started out well, although she felt electricity flowing from him. It seemed to surround his being; this must be what he talked about when he lured the others to him. She knew he used them. Took what he wanted and then left them always longing, needing more. He had shared his adoration of the game, especially with those arrogant enough to believe they played it better than he. Yes, she heard in his voice his pleasure recalling the reactions of his victims when they realized he had won.


Dangerous ground she was treading, was it her loneliness or desperation of actually feeling that compelled her? She felt the pull of her calling, that thread she had always followed was leading her still. Yet she was not blind. He was a predator on all levels, looking for amusement, feeding. He had told her all of this, why couldn’t she hear or feel the small hair rising as if in warning? Why did if feel so much like desire, longing and a raw open wound demanding she attend it?


By the time she had brought him home, she was in full of the intensity of being flooded all night just from having him near, close and touching her flesh. It consumed her sense of self. Her idea had been just to talk some more, maybe a little indulgence but she would not submit, of this she was certain.


She had just turned her back to him when she heard the click of her apartment door, and then the safety chain. Before any thought registered, she heard in her right ear a low purring that inflection turned to a growl, “Didn’t I tell you never to invite me in?”


Before the horror of his words could register, he turned her and pinned her to the wall beneath him. Deep, luxurious she felt like she was dizzy under his sinister gaze. He had taken her left arm and was pressing it painfully above her head. Right as she opened her mouth from the pain, he came in and with a fierceness she had not encountered before as he kissed her. She could feel the stubble under the surface of his face and the soft contrast that his lips left.


Later she would not recall how they ended up in her bed. However the extreme building of an emotion she had not felt continued to rise to the surface. She thought it was going to kill her, consume her sanity. He demanded this feeling from her, there was no other option; she had to respond. Gone was the playful person she often joked with, here she found herself being ravaged through her very soul. It seemed that every action he did lead to this. As one driving thrust lead into another, she thought her mind was splitting. She no longer knew what reality was, just this emotion and sensation.


Midway he viciously drove in and stopped, the jarring brought her back almost instantly and out of the moment. Quizzically she looked at him and then he grabbed her left arm and pinning it to the bed. He let her see the knife he was holding. Faster than her thoughts would let her process he cut a triangle into her palm, downward facing. Shock ran through her system that she almost missed seeing him then cut one upward triangle onto his own right palm. Throwing the knife aside he clamped his right hand to her left and resumed his rhythm. Pain flooded through her senses, she could only see white. Then he started speaking, almost chanting in a language she did not know. Each thrust became more intensive, demanding, like he was staking claim upon her very flesh.


Still holing her left hand in his bloodied embrace, he took both of their hands down to envelop his penis and began to stroke it in long swift motions. Before remounting he paused by lying his full weight on her, and kissed her again. She felt his left hand gliding between her legs, probing with his fingers; she started to shiver. He bit her lip as he sodomized her with his bloodied cock. Uncontrollable, each emotion tore through, some how she was in a place where every ounce of reality peeled and disintegrated before it could be acknowledged. Shuddering suddenly with a ferocity that undid her very perception, she came.


Not remembering his climax or even how much time had passed, she now realized all these years her thread and purpose was leading her into this web of deceit. There would be no promises, nor security. It was clear she was his now, body and soul. Until he tired of the game she created and found another to play with.


As the tears came freely she heard him ask, “What is it?”


“No, no words right now.” She replied, as he brought his arms around her in a protective embrace.

'The pain of yesterday is the strength of today'

Why is life so screwed up???