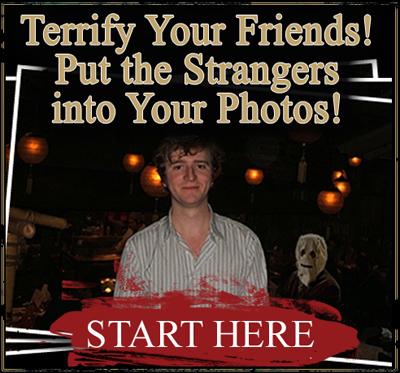 Terrify your friends. Put The Strangers into your photos! Start Here!

“…may prevent you from every going home again.”
–Mark Peikert, The New York Press


OWN 2 MOVIES IN 1 WITH THE THEATRICAL VERSION INCLUDING THE UNRATED VERSION TOO TERRIFYING FOR THEATERS!


OVERVIEW
Lock the doors. Ignore the knocking. Don’t let them in…no matter what. Inspired by true events, this heart pounding, nail-biting frightener mercilessly explores our most universal fears, where simply opening the door to a stranger leads to a grueling night of terror one could never imagine. Liv Tyler and Scott Speedman star in this relentless suspense thriller that will keep you up at night and make you never want to answer the door again!


SYNOPSIS
The horrifying events that took place in the Hoyt family's vacation home 1801 Clark Road on February 11, 2005 are still not entirely known. Champagne. Rose Petals. Candlelight. It was supposed to be a night of celebration for Kristen McKay (Liv Tyler) and James Hoyt (Scott Speedman). But after leaving a friend's wedding and returning to the house, everything had collapsed for the happy couple. Then came a 4 a.m. knock on the door and a haunting voice. “Is Tamara here?” Writer/director Bryan Bertino explores our most universal fears in The Strangers, a terrifying suspense thriller about a couple whose remote getaway becomes a place of terror when masked strangers invade. The confrontation forces Kristen and James to go far beyond what they thought themselves capable of if they hope to survive.


BONUS FEATURES
The following bonus features appear on the DVD and Blu-rayTM :