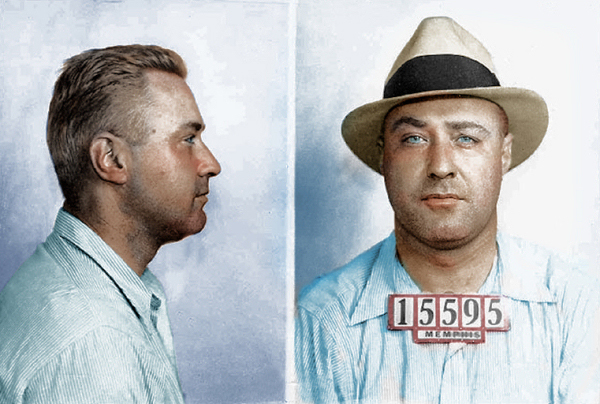 George "Machine Gun" Kelly is probably considered one of the most famous "gangsters" from the prohibition era. "Machine Gun" was born George Kelly Barnes on July 18, 1895, to a wealthy family living in Memphis, Tennessee. Kelly's early years as a child were essentially uneventful and his family raised him in a traditional household. His first sign of trouble began when he enrolled into Mississippi State University to study agriculture in 1917. From the beginning, Kelly was considered a poor student with his highest grade (a C plus) awarded for good physical hygiene. He was constantly in trouble with the faculty and spent much of his academic career attempting to work off the demerits he had earned.

It was during this time that Kelly met a young woman by the name of Geneva Ramsey. Kelly quickly fell in love with Geneva and made an abrupt decision to quit school and marry. Kelly fathered two children with Geneva, and to make ends meet, took a job as a cab driver in Memphis. He worked long hours with little reward for his time. Kelly and Geneva were struggling financially, as the job was failing to provide enough money to support their family. Distressed and broke, Kelly left his job with the cab company to seek other avenues to make ends meet. The strain proved to be overwhelming and at 19 years old, he found himself without steady work and separated from his wife. It was about this time when Kelly took up with a small time gangster and started a new venture as a bootlegger. Kelly began to enjoy the financial rewards of his new trade along with the notoriety.

Along with the new success also came the quandaries of working in the underground. After being arrested on several occasions for illegal trafficking, Kelly decided to leave Memphis along with a new girlfriend and head west. He adopted the new alias of George R. Kelly to help preserve the respect and name of his upstanding family back home. Kelly's luck continued to saw tooth with great monetary scores and several unfortunate predicaments. By 1927, Kelly had already started to earn his reputation in the underground world as a seasoned gangster, having weathered several arrests and serving various jail sentences. In 1928 he was caught smuggling liquor into an Indian Reservation and was sentenced to three years at Leavenworth Penitentiary.

After serving-out another long sentence at the State Penitentiary in New Mexico in 1929 for another similar conviction, Kelly gravitated to Oklahoma City where he hooked up with a small time bootlegger named Steve Anderson. Kelly soon fell for Anderson's attractive mistress Kathryn Thorne, a seasoned criminal in her own right. Thorne had come from a family of outlaws and had been arrested for various charges ranging from robbery to prostitution. Thorne was twice divorced and her second husband had been a bootlegger who had later been found shot to death under suspicious circumstances. The official determination of death was suicide, but many people (including one of the investigators) had long suspected that Kathryn was involved since only days before, she had made comments to a gas station attendant that she was going over to "kill that god-damned Charlie Thorne." Kelly and Kathryn became inseparable and married in Minneapolis in September of 1930.

Up until his relationship with Thorne, Kelly had been a relatively small time criminal. Kathryn's influence soon became obvious, as Kelly's crime sprees would launch him to the prestigious status of "Public Enemy Number One." Kathryn purchased a machine gun for Kelly and pressured her husband to practice. It was said her purpose was premeditated. She was a master at marketing her husband to the underground circles and public. She was known to take the spent gun cartridges and pass them around to acquaintances at many of the underground drinking clubs, introducing them as souvenirs from her husband "Machine Gun" Kelly.

Many historians (and fellow inmates of Kelly) believe that Kathryn was the creator of the "Machine Gun Kelly" image and became known as the mastermind behind several of the successful small bank robberies Kelly pulled off throughout Texas & Mississippi. In August of 1933, the FBI published Wanted Posters describing Kelly as an "Expert Machine Gunner" and created a public frenzy that would later place Kelly into the history books.

In July of 1933, Kathryn and Kelly plotted a scheme to kidnap wealthy oil tycoon & businessman Charles Urschel. Kelly, carrying his trademark Tommy Gun, and two other men carrying pistols entered the Urschel's mansion in Oklahoma City. The Urschels were playing a game of bridge with friends when Kelly stormed in threatening to "blow everyone's head off." Kelly's new hostages were non-cooperative and he was unable to determine which man was Urschel. The two men were forced into a sedan, covered with a tarp and searched for identification. Once they found the ID on Urschel's friend, a man by the name of Walter Jarret, they robbed him of $51 and left him on the side of a deserted road. Urschel was taken into hiding on a rural ranch in Texas and the Kelly Gang made demands for a $200,000 ransom.

The Urschel's family friend E.E. Kirkpatrick made drop arrangements and delivered the ransom in denominations of $20 bills. The money was delivered near the LaSalle Hotel in Kansas City on July 30th, ending the eight-day ordeal. The following day Urschel was released near Norman, Oklahoma, and casually walked into a restaurant to call for a cab. Urschel was sharp, and though blindfolded throughout the ordeal, made sure that his fingerprints were spread everywhere, counted his footsteps to various areas when blind folded, and audible sounds of his surroundings were mentally cataloged, all of which would later become useful in the FBI's investigation.

After splitting the ransom money with their accomplices, Kathryn and "Machine Gun" started state hopping trying to stay two steps ahead of law officials. From the several clues that Urschel was able to provide, the FBI raided the ranch and made an arrest of one of the other conspirators. The bills that had been used for payment in the ransom, had traceable serial records and the Center Bureau of Investigation (now the FBI) started a nationwide search for whom they now suspected was George R. Kelly.

George and Kathryn bounced around different states with Chicago becoming their main hub. Both dyed their hair to conceal their identities and enjoyed a lavish lifestyle. After several weeks in hiding, the couple finally made their way back to Memphis to stay with longtime friend John Tichenor. On the morning of September 26, 1933, Memphis police, along with FBI Agents, surrounded the Tichenor house and then made a violent forced entry. It was said at that moment, that Kelly coined the phrase: "G-Men, please don't shoot." Kelly was found badly hung over from the prior evening's drinking binge (still in his pajamas) and Kathryn was in bed still asleep. The couple was quickly flown to Oklahoma where they stood trial and both received life sentences. Eventually all of the accomplices were apprehended, and out of all of those involved, six were issued life sentences.

Kelly was transferred to Leavenworth in Kansas, and Kathryn was transferred to a federal prison in Cincinnati. Kelly was arrogant towards prison officials, and bragged to the press that he would escape, break out his wife and they would spend Christmas together. It was decided that these threats should be taken seriously and in August of 1934, Kelly along with his accomplices Albert Bates and Harvey Bailey, were transferred from Leavenworth by train to Alcatraz. Arriving on September 4, 1934, they would be among the first groups of prisoners. Kelly became AZ#117.

At Alcatraz, Kelly was constantly boasting about several robberies and murders that he and never committed. Although this was said to be an apparent point of frustration for several fellow prisoners, Warden Johnson considered him a model inmate. His life at Alcatraz was largely uneventful. He took a job as an altar boy in the prison chapel, worked in the laundry, held an administrative role in the industries office for a long period, and generally served out his time quietly. Warden Johnson made statements that Kelly would become depressed when receiving mail form family members, but rarely failed to write his full quota of letters. He seemed to feel remorse for his crimes and always felt that his wife Kathryn and the other accomplices were treated too harshly.

Inmate Willie Radkay, who shared a cell next to Kelly on the second tier of B Block, stated that he shared many fond memories getting to know him, working together in the prison industries along with Basil “The Owl” Banghart. Everyday they would work side by side, having to endure all of his “big” tales. When asked his most prominent memory of sharing a cell next to “Machine Gun,” he said that nearly every night he would accuse Willie of snoring, reach out of his cell and slap him in the head with a magazine. Warden Johnson also stated that Kelly wrote several remorseful letters to Urschel begging that he help plead his case. Urschel apparently never responded to any of Kelly’s letters.

George “Machine Gun” Kelly was returned to Leavenworth in 1951 and died of a heart attack on July 18, 1954. Ironically, it was his 59th birthday. Kathryn was released from prison in 1958 and took a job at an Oklahoma hospital as a bookkeeper.