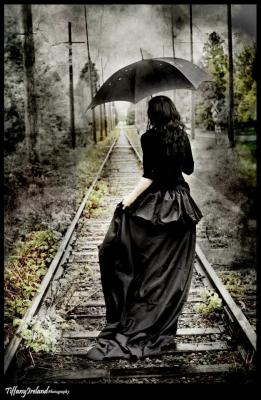 He, Rifling through his shoebox of memories, lifts the tear stained letter from where it had lay for over a year. Trembling he holds her note loosely in his hand. The paper dances jerkily in the air, the words imperceptible, yet etched in his mind. Slipping from his grasp the paper cuts through the air in quick, fluid movements as his breath catches painfully in his chest, icy iron fists grip his heart. Falling to his knees he places his head on the floor, sobs rip violently through his body, tears he has been too numb to cry flow down his cheeks, dripping onto the hard wood beneath him. Again, like in countless nights before, the scene plays in his mind. Even now, the grinding of the chair against the floor still reverberated in his ears. The taut snap of the rope echoed inside his head. Yet the sound that permeated his thoughts was the sickening popping sound of her delicate neck, the bubbling of the air in her throat.

She had looked at him, those eyes that had become so empty and lifeless had looked right into him, freezing him. Numbly he had watched her run her delicate hand down her face. He still felt the scream rise in his throat. The scream that died as the rope reached its full length, sending a thunder-like crack through the air. He had struggled desperately to convince himself he was not responsible, she had fallen in love in the first place. But here, now, his head lying in this pool of tears, on his life he could not remember what made him think that her death was not his sin. His felt disgustingly corrupted, he had caressed death from within the fragile girl.

He stumbled to the bathroom, hoping he could wash away the guilt that was burning at his skin. He let the cool water pound his body, each drop blending with his tears and collecting in the tub beneath him. He rested his head between his knees as the water rose, the surface caressing his face. The water was so calming, he felt himself melt away in its embrace. His breath began to bubble in his mouth, but he couldn’t bring himself to lift his shameful face. Slowly his pain melted away, he felt light again, like an unburdened child, then, everything just disappeared into darkness…

Sultry and heavy, the air of the small underground chamber is stained with the smell of blood and sin. The aroma is intoxicating, stirring one to be gripped with parylizing desire to throw off ones genteel decor and ravish the closest warm-blooded being. Shuddering inperceptibly, Nevae clears her mind and surveys the contents of the room. Low lights cast deeper shadows into the recesses of the forbidding lair, serving only to heighten the uncertainty of the human minds as they see dark figures passing through the sea of darkness. Those with the gift of enhanced eyesight had the opportunity to see how truely lavishly the den was adorned, this gathering spot being the haunt of this rotting city's most infernal and powerful. Casting a glance around, her eyes make contact with those of the Dark Lord Ulugarh, who was lounging casually amongst his harem of beautiful blood-dolls. GIving him a quick nod, she appeases his insatiable need to be fawned over by beautiful women. There was an unspoken understanding that he would never ensnare the undivided attentions of the Dark Mistress however. Where he was powerful, she was beautiful. It was her stunning appearance that had drawn her Sire to her in the first place. He had enjoyed running his hands through the raven-black curls that rippled down her back. Her long neck was slender and smooth, almost so tempting as to be obscene to show in public. It invited passionate bites, the blood of the quickly healing wounds would trickle over her find collarbone and into the crevice of her ample busom. At the moment, that busom was clad in a dark red, velvet corset, elaborately embroidered in intricate designs, and cinched tight around her whittled waist. The corset was a gift from another of the Dark Lords, whom she noticed was sitting in a place just in the corner of her eye. She pretended not to see him, allowing his eyes to take their fill of her. Her purpose for being here tonight was not to secure more admirers or political contacts. This was a visit of a more personal purpose.

Sitting in a secluded part of the bar was one of the few human patrons, Lord ..., patiently awaiting with his hands folded on the table, watching her progress towards him. His regular heartbeat did not betray any anxiety of this night. He seemed to be perfectly at ease with the nature of events that were planned to take place. This was one of the reasons why Nevae had chosen him to bestow upon the gift of the dark powers. Sliding into the seat across from him, she flashes a smile, her long, sharp fangs glittering even though there is little light to reflect from them. Her companion returns the smile with a hint of boyish excitement, parting from his usual composed countenance. Lifing a hand, he motions towards one of the glasses sitting before them and says, "Let us share a glass of wine in celebration of my impending journey into eternal life." Raising his glass to her, he continues, "I am greatful for the opportunity you have granted me, and I can assure you, it will be well worth it". Leaning in and placing his hand on hers, he adds, "believe me, I will reward you well for the knowledge and power you will affort me". Waving her free hand dismissively, she responds, "there is no need for reward, the reward of your presence in this community will be sufficient. I make a point of picking only the talented, principled and intelligent". Picking up her glass, she takes a sip of her wine, the dark liquid staining her lucious lips. Winking at her companion , she raises her glass and says, "I love your good taste in wine... and other things". There was a shared understanding between the two of what she was really referring to. The taste of his blood was like a drug for her, so rich, so decadent, just the thought of it sent a wave of excitement through her. Underneath their cool exteriors both of them were buzzing with anticipation, looking forward to this night like two young suitors about to become lovers. The Lord and Nevae were far from being young, and far from being lovers, though. However, nothing that could pass between them, with him as a mortal, could compare to what passes between a vampire and her spawn. There were vampires that treated making spawn like some mortals treated having one night stands. These poor spawn wandered the night, unnutured and angry, like jilted lovers regretting an unfulfilling lapse in judgement. In her opinion, a discerning creator makes themselves accountable for the impact of their descision on the lives of their spawn, and the community of vampires. The impetus behind creating, for her, was not to show her prowress, but more to create offspring that were sucessful, educated and aware of their place in things. Her train of thought was interrupted by the sound of a glass being put down on the table. Refocussing her attention, she looked across at the Lord and grinned, saying, "Shall we?" His nod of acceptance signalled their cue to leave. Finishing off the last of her wine, Nevae departs from the table.

Exiting the bar, Nevae takes in a deep breath of the night air. She muses, "the night air is much more refreshing than the air of the day," Indeed on this night, the air was crisp, a slight breeze picking up the sweet aroma of a neaby group of nighttime flowers. Turning to him, she notes, "in the day, the sun beats down, baking the refuse of humanity. The toil and the inventions of the day denizens create an unpleasant stench." Putting his hand on her shoulder, the Lord nods in agreement, pausing a moment to take in the sights and smells of the night. After a moment, he says, "the beauty of the night, and its creatures, makes up for the solitude it contains. I will miss being able to observe the akward and desperate interactions us mere mortals engage in, attempting to fulfill our basic needs in the fleeting flash of our lifetimes....

Work in progress, please message with constructive comments. I'm aware the format and spelling are bad.