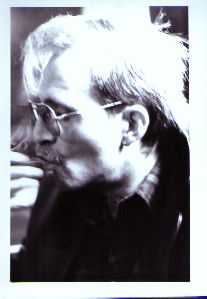 Kenneth Abrahms awoke with a start, his mind totally aware.

He was awake, with knowledge of his dream, from hours or minutes earlier.

Ken turned on the lamp and reached under his bed, for his pad and pen and began to write.

The young man wrote with feeling, of someone that somehow Ken felt connected to: A. Newman and a time after his own.

As dawn rose he set his pen aside and turned his lamplight off, feeling quite satisfied, with his creation: tomorrow he'd hit the typewriter.

The lift hurtled upward at an incredible rate, with inertia pulling at Newman's body. Within minutes it drew to an abrupt stop, the display panel registering that he was now on the ground floor.

The doors hissed open and Alec looked out at yet another long white corridors, with only one door leading of it, at the end.

Stepping out off the lift he walked cautiously down the corridor, his eyes intent on the sealed fire-door ahead, that he pushed open with ease.

He entered what appeared to be a control-room, with much of the machinery smashed, dead bodies slumped over their consoles, steal shutters down over the windows on each side of the four-sides of the control room.

Alec looked around himself, listening carefully, to the room.

There was a hum.

Listening carefully he pin-pointed its source and stepped towards where it emanated from.
There was a power-hum issuing from the back of one of the consoles.

A power-hum meant that he had the opportunity to seeks answers, perhaps.

Powering up the machine Newman was pleased to see the screen flicker into life and began to locate the information he sought: the commands daily-log.

There had been a war and, this command centre had been part of a strategic response: then the air-conditioning system had broken, allowing gas to circulate throughout the base. Eventually the system had repaired itself and the air-filtration had begun.

But, it did not mention one salient point: that had been when The Command Centres A.I. had made the decision to awaken A. Newman, a clone needed to facilitate it's final response to the enemies first strike. That first strike had devastated the centre though and, it had taken almost a week for the signal to reach Newman's pod.

Running his fingers through his hair, Ken reached for the well-thumbed paperback on the small locker by his bedside. He turned the lamp on, directing the shade so that the light shone directly onto his book, 'Logan's World', a sequel to the original novel written in nineteen sixty-seven. He'd seen the film just the week before and acquired the book the day prior.

He dragged out his orange portable record player and knelt before the pile of L.P.'s next to his wardrobe and sorted out one particular album, it's singers on the cover; the blonde haired male in cheese-cloth, his dark-haired slim sister next to him, her head tilted a little.
The album was 'Horizon', by The Carpenters and since he had acquired it, Ken had played it to death, as his Mother had said many times.

Carefully lifting the stylus, he placed it down onto the third track, then sat back on his bed, a pile of pillows behind his back, as the sweeping strains of 'Desperado' were sung by the harmonic siblings.

Very soon Ken had re-entered Logan's World and was once again totally enthused by the story, almost ignoring the last seven tracks of the album.

Then as the haunting 'Eventide' began, there was a knock on the door.
“Do you want cocoa?” His Mother called from the other side of his bedroom-door.

Without dragging his eyes from the print, Ken replied; “Yes please Mum.” Cocoa a few hours before bedtime always helped give him the most unusual dreams; dreams he appreciated for the creative inspiration, he sometimes found for his stories.

Alec had risen from the pod and left the laboratory. He had checked each of the scientists bodies, before leaving. Each of them were dead.

He looked down the corridor, walking cautiously.

Newman looked into each room that he passed, calling out, “Hello?”

There was no sound, except for the sound of his footsteps echoing in the empty hallway.

He was alone, looking for someone so that he was not. Yet there did not to seem to be anyone to find.

So he continued through green firedoors, to find another long empty corridor before him, with a lift at the far end. He began to run, down the empty white corridor.

Once at the lift he pressed the green button to the right and the doors hissed open.

Newman entered and looked to the panel to his right, noting that there sixty floors below ground level.

He looked above the doors and saw that he was on the fifty ninth floor below ground, so pressed the green button with an arrow on it that pointed upward.

Last thing you watched on tv