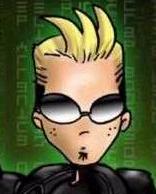 The tattoo I bear on my chest has an interesting story. It originates as a ceramic tile done by Kate, an associate of mine in the re-enactment fraternity. The inspiration for the tile came from a meditation she did some time ago in which certain things were revealed to her about the nature of animals.

During the meditation she was approached by a number of wild beasts walking upright who invited her to dance under the moon with them, and there dancing under the moon was a Bear who had shaved off all his fur to reveal a body covered in tattoos. It was revealed to Kate that all the animals are tattooed, some more then others, under their fur, but they only show them by shaving the fur off and dancing under the moon light.

As my other nickname is Growly Bear, the image of a Naked Tattooed Dancing Bear sort of fitted, and as I had been looking around for some time for a tattoo, with no success, this just struck a cord!

Now I have an odd relationship with Pain, if I’m enjoying myself and get hit or something it tends to just set me off giggling, so the poor guy doing the tattoo had no idea what hit him as I am sitting there giggling and laughing while he is tattooing me up! As he said, he has now seen it all!

Unfortunately as I heal far too well and fast my body chucked a load of the ink out, and a lot of the tattoo faded, but its there, imbedded in my skin, and even if it was no longer visible, I’d know it was there, and that it the important thing to me.