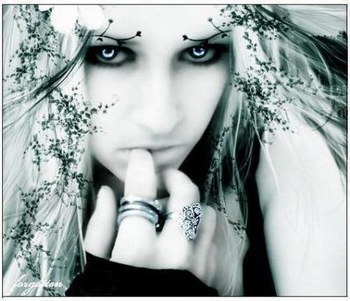 In Greek mythology, Endymion and Selene were a couple. Endymion was a handsome Aeolian shepherd or hunter, or even a king who ruled and was said to reside at Olympia in Elis.


Selene, the Titan goddess of the moon, one day passed by with her horses and cariot and looked over the sleeping mortal. In instant Selene fell in love with the mortal. She believed him to be so beautiful that she asked Endymion's father, Zeus, to grant him eternal youth so that he would never leave her.


Alternatively, Selene loved how Endymion looked when he was asleep in the cave on Mount Latmus, near Miletus in Caria, that she entreated Zeus that he might remain that way. In either case, Zeus granted her wish and put him into an eternal sleep.


Every night, Selene would visited him where he slept. Endymion in his sleep would always dream that he was holding in his arms the beautiful Selene. The godess of the moon. The two of them remaind forever lovers. Spending each night in each others arms.


Selene and Endymion had fifty daughters every single one beautiful and fairier.

I enjoyed this read. Did you write? With all do respect my apologies for before. I did not mean to insult my mentor. I was merely showing thy gratitude to you. Selene is my one true Queen Mother and Ambrogio, my One true King Father, blessed Be.

I know this story it a good one