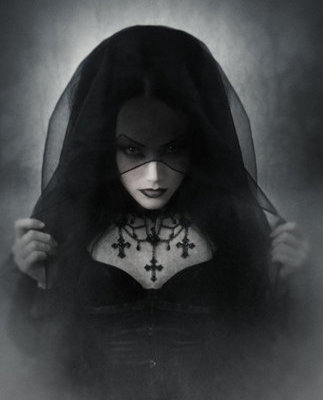 Earth holds and supports us like the arms of the great Goddess. It's the

ground we stand on. Trees take root in it. Meadows rise from it. Crystals

grow within it. It grows our grain and gives us our green herbs. No other


All the elements, earth, air, fire and water, have correspondences: magickal

tools and qualities that are associated with them, which can vary from

tradition to tradition. (Women's traditions tend to be pretty flexible, so

don't think of these as graven in stone.) The correspondences are part of the

symbolic richness of women's rituals. What we know about Goddess can't be

expressed in words, and rituals rife with symbolism lead us to that

inexpressible knowledge better than any speech could ever do. When we invoke

the qualities of the elements, we surround ourselves with the images of


The element of Earth corresponds to the direction North. Its season is winter,

and with winter comes quiet, thoughtfulness, and awareness without distraction.

Moving waters freeze. The riot of summer growth is dormant. With quiet comes

the ability to keep silent, to hold secrets, to listen, and to speak mindfully

and purposefully. Its magickal tool is the pentacle, the five-pointed star

inscribed in the circle, an ancient symbol of magick. Earth corresponds to

midnight, the witching hour, a time when truth is laid bare. Earth's

corresponding colors are black, like night, and the colors of what it supports,

green and brown. It is also the element of metals, ores, crystals and

minerals. For this reason, the element of Earth corresponds to wealth and

material comfort, from gold and jewels to career and home. Earth and its

correspondences are heavily used in spellwork because material lack is a

problem for many women, maybe most of us. And, Earth is the final return of

energy when we ground. Earth is something we can readily touch and feel and

smell. It's so prevalent that it only takes a little opening up to become

aware of the Mystery that continually surrounds us.


Earth is both a comfort and a source of disquiet, even fear. You can break

open a newly baked loaf and smell the Earth in its intoxicating scent. You can

also seek the unseen and find yourself in the dark. The Dark Goddess is

symbolized by Earth. The Old One knows and loves the Light. She has been a

Maiden and a Mother, and She knows what passion is. But She is also the

Destroyer, not just cleaning up after the party's over, but a necessary part of

the Wheel of Life. In the end, the Dark Goddess will cradle us when the Crone

beckons us from across the Veil, kind and loving, but also inexorable.


Dark and Light are parts of the same weave. The element of Earth can teach us

to embrace them both.

Very nicely written so people like me can understand. I always been fascinated by Wiccan and witchcraft, but never knew but 1 person who did it. She kicked me out without ever speaking to her. I was at her house with her sister for about 3 min when she told me to leave for no reason. The place was lit up with candles and witchcraft books everywhere. Why would she kick me out not knowing me?

hey these guys are right,, it is well written, but you got me beat???

having worked the earth most of my life!!! earth can be dark and light for sure, never learned much though!! lol

wow that was long but I liked it ..

worthy of reading loves very good and you should check out my poetry I wrote about the Earth I would love to hear your opinion on it :)

Word start with B