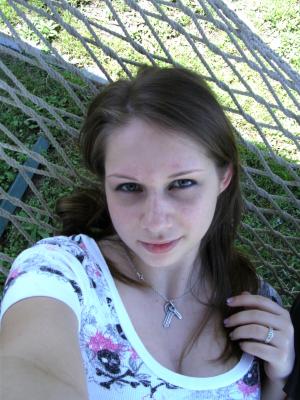 Insanity is just a way of surviving

I welcome you into my mind. Come join me by the fire, make yourself at home. So you want to know a little bit about me? I ask you, how can you truly know someone if you never meet them? How can you ask someone to describe themselves to you, if they themselves do not know who they are? The simple answer is you cannot. I could give you a description of who I think I am, but you may not agree. I could tell you my likes and dislikes, but there are so many, and they are constantly changing, growing and shrinking, that I could never hope to tell them all. No, the only way to know a person is to speak with them, take the time to care. There are many sides to any person, and you may never meet them all. You could think you know me as well as you know yourself, and not even scratch the surface of my being. But if I can, I will appease your mind by attempting to tell myself to you.

First and foremost, I am happily married to the most wonderful man. I am a loving mother to a beautiful baby girl. My husband is a soldier of the U.S. Army. One thiing that is sure to piss me off quicker than anything else is to disrespect a soldier. I can garantee you that the soldiers themselves don't like this war any more than you do, but they don' t choose to be there. If you have something bad to say about this war, take it to congress and leave the soldiers alone.

I have a strong attraction to blood and the night. I like the taste of my own blood, but I’m not too keen on the idea of someone else’s blood running down my throat. Most people think I am slightly disturbing because I love to watch anything gory.

I love to read. Just give me a book, and I’ll be set for the rest of the day. I read on ff.net all the time. I like to read fan fictions about Harry Potter (the characters, not necessarily him.), Inuyasha, Naruto, and Yu Yu Hakusho. Another site I like to read from is OneManga, it has every manga I could possibly think of and more. My favorite type of book is Fantasy. I read about vampires, faeries, magic, dragons, and anything else that makes me forget who I am, and this world that I find myself living in.

I love the Japanese style and culture. The art is amazing, and often times, breathtaking.

I like the myths and legends that float around in their culture. Mainly the legends about dragons, and the messengers of Inari, the foxes.

My Looks
I have brownish-blonde hair that now comes slightly below my shoulders. I have hazel eyes, mostly green, but sometimes blue or gray. I am 5'6 and slender and curvy. You will almost never see me without my eyeliner. A lot of people say I look good, but I just don't see it. I’m the most comfortable wearing a pair of jeans, and a t-shirt, or a nice blouse.

Random picture of me

My Attitude
I'm not like anyone else in the world thanks to my attitude. I am nice, but if you are stupid enough to piss me off, you'd better run. I have a unique personality simply because of my standards and beliefs. I'm emo , but that doesn't mean I smoke or cut. All that means is I have emotions and I’ve went through some things that I’d rather not repeat. If you think emo kids need to grow up and deal with their problems like everyone else, then we will not get along very much.

Like I said, I have a unique personality. I have a mix of many personalities simply because of who I hang out with and where I live. I was born to a redneck family, and I’m an emo and punk from things in my past. I’m a ghetto redneck because we live with the boonies on one side and the ghetto on the other.

I'm easy to get along with unless you push my buttons. I’m an otaku by choice and I hang out with the weirdest group of people you will ever meet. My friends are even weirder than I am. They do really crazy things and say really weird things, just to see me smile. I like to be really random, and more than likely I'll scream, just to see your reaction. I like to debate and you'll find that I’m very passionate about the things I believe in. If you want to piss me off, be or do anything on my dislikes list. But I wouldn't recommend it.

I am a very catious person. Don't expect me to really open up to you the first time we speak. When I meet new people, I tend to study them for a few days, then decide if they are worth my time, or if I can trust them.That is just me and I don'y mean any offense by it.

I used to be a Christian, but I lost the passion for it. I believe in re-incarnation and more than one god. Just like I believe there is life on other planets and parallel universes. I'm Bicurious. I'll kill you if you ever hurt any of my friends. I'm over protective when it comes to the people I love. I have the most amazing husband, and am happily in love. Please do not bother me if you are just looking for a hook-up.

At first glance, people either classify me as "prep" or "punk" depending on how I feel like dressing that morning. Once people get to know me, they call me a loner, outsider, freak, or bitch (I speak what's on my mind when pissed). I have been called gothic because I dress in black and have an "unholy" addiction to black and vampires, and I'm nocturnal (when I can get away with it). People call me a whore because most of my friends are guys, and they automatically think the wrong things, I've been called an anime freak (or japanafreak, depending on who it is) because the only thing I watch is anime, mostly the untranslated version, subbed. Mostly, people judge me from rumors and looks, and that is something that I cannot stand. I am nothing like what people think me to be, and only very few people are actually brave enough to face me to see if the rumors are true or not. Most of those people become my friends and learn not to listen to rumors. Two people listened to all of those rumors, and decided that they wanted to meet me, and judge me for themselves. Now those two people are among my closest friends.

I've been called alot of things in my life, but I can't classify myself, for I am simply me. Love me or hate me, I won't change just because you don't like me. Get over yourself and grow up a little, then come back for a chat, if you like.

Some people think I’m abusive because of the way I play around. I often hit and kick, but it doesn’t hurt. And I like to bite. Randomly and out of nowhere, I either bite my friends, or say, “I need a chew toy.” After I say that, some of my friends offer their arm for me to bite. When pissed, I’ve been known to leave indentions in people’s legs where I kick them so hard. I also got mad at someone a couple of years ago, and I bit him. He still has the scars from that.

Updates
I update my profile when I think of something new to say, or find something new that bugs me, or I just feel like ranting. Or I’m bored, lol. Either way, my profile doesn’t stay exactly the same for very long. Even if it’s just one part that I change, or add. I like pictures, and tend to add something that I like, or something that pertains to the writing itself. Which isn’t very often, lol.

Rating
I am a person who reads profiles, and rates accordingly to what I see. This does not mean I judge people, but I judge by how much you write about yourself, or things that interest you. If you put a bunch of pics and quiz results on, you’ll get either an 8 or 9, it depends. If the pictures balance out nicely with what you write or things that you like, and it doesn’t seem overcrowded, you’re fine, nothing to worry about. Profanity, I can stand in small doses. Meaning that if I read your profile, and every other word is a cuss word, or you are putting someone down, you’ll get about a 5 through a 7 depending on how bad it is. If I go to rate your profile, and it contains something along the lines of “Just ask what you want to know,” then you’ll probably get a 5. Very rarely do I give out anything less than that. I won’t tell you what I rate you, but that doesn’t mean I’m hiding it. If you change/ update your profile, let me know and I’ll re-rate you. Don’t come to my profile and rate me a 1. That will cause me to lose my respect for you and you will be ignored.

movies
Queen of the Damned, Interview with a Vampire, Underworld 1&2, Blade 1&2, Rent, Lord of the Rings trilogy, Nightmare before Christmas, Titanic, Pirates of the Caribbean trilogy, Sweeny Todd, MirrorMask, The Omen, The Happening, The Mummy 1&2 , Scorpion King, Serenity , The Hills Have Eyes 1&2, Blood & Chocolate, Eragon, Hostel 1&2, Saw 1,2,3&4, See No Evil, Memoirs of a Geisha, all the Harry Potter movies, Chronicles of Narnia, Black Christmas, Juno, The Cell, The Covenant, Coyote Ugly, Skin Walkers , Knocked Up, Corpse Bride, Craft, Crow 1&2, Twilight, Spirited Away, Howl's Moving Castle, Kiki's Delivery Service. I like any horror movie and a lot of magic and fantasy.

I am bicurious and proud of it. This does not mean that I am looking for anyone, so please don't offer

Likes
Anime
Japan
Japanese based things
playing in the rain

I use bites to show interest or to say "hi"


I'm all for new friends, but please don't add me without permission. Don't ask if you can add me if you have no intention of holding a conversation with me. There is no point to this

This has been a production of My Imagination. Thank you for your participation and come again. Please rate on your way out. ^_^