PASSION IS NOT FOR THE FAINT HEARTED

WELCOME to my profile...

All you wonderful people whoever or whatever you may be...
Freaks, Geeks,Punks, Goths, Moshers,Metal heads, Emo's(yeah i'm Emo friendly),Slave's,Mistress's,Swingers,Sex Goddess's, Saints and Sinners i welcome you all!!! Hahahahaha.
It is a work in progress, so please don't be strangers come back as much as you like, i'll add to it from time to time a little here a little there...

I love most things Horror, films, Books, Graphic Novels ect. It's always been Vampires for me though (especially female Vamps, they're so damn SEXY!!!)

My first memory of Vampire's was seeing a magazine on a market stall that said ADULTS ONLY!!! (No not that kind of mag silly!) So being the curious, intuitive kid that i was, i had to sneak a peek.
On the cover was a Colour picture of Christopher Lee as Dracula.
Blood Red eyes and Fangs bared.
I thought it was fantastic! I'm a massive music fan, into most genres (except Hardcore Techno! It gives me a fuckin headache!) Mainly INDIE,ROCK, PUNK, ALTERNATIVE and GOTH have served me well over the years...

I adore Tattoo's and Piercings,I got my first tattoo at the tender age of 17 and that was it i was hooked!I just love the whole Tattoo experiance from start to finish.
First of all choosing the design, size ect. Then havin it done, when i hear the buzz sound of the Tattoo machine that's it i'm in heaven.
And as for the pain? Well that's a crucial part of it for me, if it didn't hurt it wouldn't be as good.

Some people think i'm crazy to enjoy something that's painful but as i try to stress to them there are different degree's of pain.
I mean if someone said " You like pain don't you Chris!.. Do you want smacking round the head with a broken bottle?" I would quickly decline thier kind offer, however tempting that might be, NOT!!! Hahahahaha like i said different degree's of pain...

And last of all the after care, My skin takes a while to heal, it doesn't like been tattooed at all it's very sensitive but fuck it i can't help that. I went on to have ten done within six months.
I'm in the process of havin them all covered up now but don't regret them though,it reminds me how impulsive i used to be!And anyway i love to re-invent myself...
I am having Sleeves done now (CHECK OUT MY PORTFOLIO) it's taken 4 years so far...
And when i get's me enough tattoo's i'm gonna run away and join me a Carnival or Freakshow or somethin hahahaha.

All Black and Grey with touches of White. On one arm i have Religious stuff. A Celtic Sun, Gothic Cross, A Madonna type face, a flower, Sacred Heart and an Angel. I'm from a Catholic background on my Mothers side and i although i'm Agnostic i still think Religious images look soooo Fuckin' cool!

On my other arm i have more Gothic stuff. A Wolf, Moon, two Vampire Girls faces, Nosferatu face, The Vampire Beast (from Dracula), and Background on both.
I've got one space left, thinking of a Vampire Skull but i don't know yet, if anyone's got any idea's i'd love to hear them.


I used to have five piercings, ears and eyebrow. Just got the one now (my nipple)which shock, horror is the most painful piercing you can get! Yeah i thought it would be the downstairs stuff as well he he.

I'm Tall (ish), Dark and Handsome (oh and modest too lol) 5ft 11", Dark Hair, Brown Skin, Brown Eyes.
I was born and live in England. I'm one of the Ancients on here (44) damn that gettin' old shit! But i do have this Dorian Gray thing going on so it could be worse...
Married,with 3 Beautiful Daughters (Of Darkness he he), i can make a very loyal friend for life but if seriously crossed, will hold a grudge for longer...

I'm a Vegetarian and have been for over 20 years. Oh and by the way, don't message me and say how can you be into Vampire's and be a Vegetarian? Because i'm sick of hearing it yawn, yawn.
Come closer i will say this only once.. I AM NOT A REAL VAMPIRE! And even if i was i wouldn't be a Vegetarian or A Meateater, i would be a Blooddrinker.
So i would chow down on chav's for the rest of my natural/un-natural life if that is what it took to survive!

I'm a lover not a fighter put it this way i'd rather join Fuck club than Fight club! Unless someone threatens my loved ones, then that's a different matter!
I dress kind of normal now i suppose(Blue jeans,T.shirt,Trainers),whatever normal means. In Two prievious incarnations i was a Punk when i was (15) with Peroxide dyed bright Yellow streaked Spiked hair, Grandad Coat With Angelic Upstarts painted on the back, Whatever Ripped T.Shirt, Bondage Pants,Studded Belt and Black Doctor Marten Boots.
Punk was the movement that started me on my eternal road of individuality. I remember at the time that i really liked this Madness song, and a friend of mine said "you can't like that song it's not Punk"
And i Said "fuck you! Punk is about doing anything and liking anything you want too"


And then my Goth days in my 20's i wore all Black, black on the outside 'cos black is how i felt on the inside. An old forbidden dinner jacket (or tux), Skintight jeans, Shirt or T.Shirt and laceup plimsoles.
And for special occasion's(not that i got invited to many being the local freak 'n' all) i would wear a Black Velvet suit and Blood red shirt combo. I had long Black hair, wore make-up,Black Eyeliner, Black or sometime's Red lipstick, Black nail varnish and sometimes foundation.


I didn't go to a lot of Alternative clubs 'cos there wasn't many where i lived, so instead went mostly to normal pubs and Clubs (there's that word again) which at times could be a little , shall we say naughty! I've had more than a few moments because of the way i looked. I just gave them my wildest fuck off stare and most of them left me alone haha... so i was a real Alternative so to speak.
I miss those days with a Passion but i'll always be Gothic at Heart!

I love singing and used to be lead singer in a band until i got sacked hahahaha well i didn't get the sack really but well it's a long story.. I'm maybe thinking of starting or joining another band (so watch this space!)

I'm a bit of a film buff too, Gangster movies are great i like my onscreen violence to be strong, shocking and uncompromising and Mob films usually deliver...
70's, Cult classics, Independent,Roadmovies,French,Japanese and of course Horror but my favorite film of all time is Badlands starring Martin Sheen and Sissy Spacek.

(PLEASE DON'T TRY THIS AT HOME)

I originally posted this in the forum and someone said i should stick it up my arse, i mean stick it in my pro so here goes....
Quite a few years ago, Me and my mates were joyriding in the wilds of Yorkshire somewhere. Having taken copious amounts of alcohol and shitloads of drugs.. (not the driver though that poor fucker was sober as a rock star in Re- hab hold on that's not a great analagy is it? oh well you know what i mean) Anyhoo we were cruising along at about 50 or 60 mph me riding shot gun, with the radio blasting out! Windows open, my then long hair thrashing about in the wind..

When impulsively i decided to slip out of my seatbelt, said " See ya " to my buddies and proceeded to climb out of the car window and on to the roof rack.
Slipped my feet into the metal bars and stood up , arms outstretched and began Car Surfing a go go... All Fear Factor like but without the Safety precautions..
As i'm doing this AC/DC's HIGHWAY TO HELL came Screaming out of the radio! Amid raised voices from the car.. " SLOW DOWN and GET BACK IN THE CAR YOU CRAZY BASTARD! "

All i could say was " OMG Turn the Fucking radio up! " I was far to gone.. All i could think was this is Awesome what a Buzz! But afterwards you could have Killed yourself you Stupid Cunt!
I think i'm like a Cat with 9 Lives! I deffinately Lost one of them that Night.. I fact i reckon i'm down to my last few...

Child Abuse,Racisim,Homophobia,Animal Cruelty,Bad Manners,Litter,Meat,The Smoking Ban (fucking fascist's)People who can click thier fingers (Bastards the lot of you) i must be the only person on the face of the earth who can't click his fingers! And no don't even bother tryin to teach me, my 7 yr old daughter has tried and failed already yes she's only 7 and can do it (the shame of it!)Trendy Veggies,Man United(SCUM),Coldplay(they should change thier name to Bland with a capital B)Big Brother,Late night quiz tv shows,Chris Moyels, Mornings (yawn),You, if you don't like me, just kidding or am i???

~ GEEKS ~
Do i consider myself to be a Geek? Yes i do guilty as charged!
I'm a film, History, Arts, comic book geek and i'm fine with that. So if your a Geek embrace it don't hide it!
I mean come on, even God is on our side -( bla bla AND THE GEEK SHALL INHERIT THE EARTH!!!)
NERDS on the other hand can just Fuck off!

Well i'm an introvert/extrovert especially the latter after a few drinks of evil (Whisky) hahahaha.I can be a moody Fucker and sometimes downright nasty but all in all i'm a happy sort of guy. When i do get depressed i try not let it show when i'm out cos i don't like to bring other people down. The Tears of a Clown, when there's no one around... Oh yeah baby, baby, baby.............

True Blood (Love It)
The Life and Times Of Tim
Dexter
Ideal
The Sarah Connor Chronicles
My Name Is Earl
The League Of Gentlemen
The Office
Big Train
The Soppranos
The Royle Family
Red Dwarf
I'm Alan Partridge
Father Ted
Sexcetera (Kira Reed Mmmm)
Deadliest Warrior
Match of the Day
Football Focus
Harpers Island
Flash Forward and on and on and on...

Two Nuns are driving home in Rome, when all of sudden a Vampire jumps in front of thier car and bares his fangs..
" Show him your cross Sister quickly now"...
So the other Sister leans out of the car window and say's " Get out of the way you Toothy Bastard"!!! 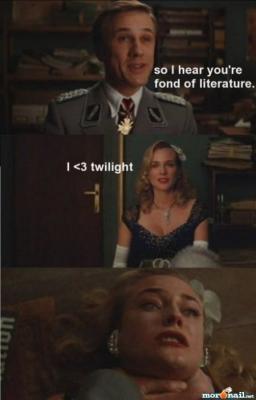 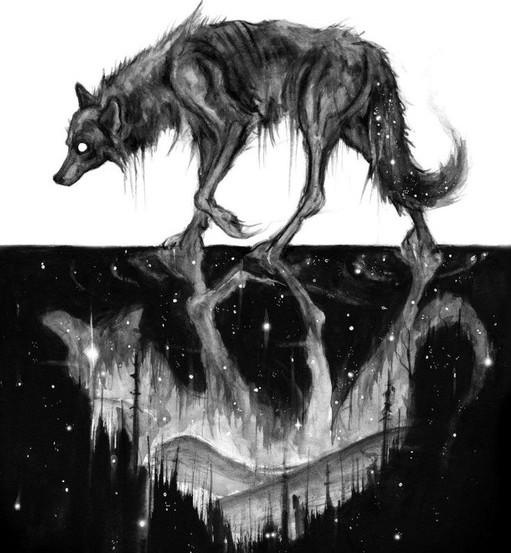 The Coven of Chapters Written is looking for active members, If interested please feel free to message me or one of my ACMS.