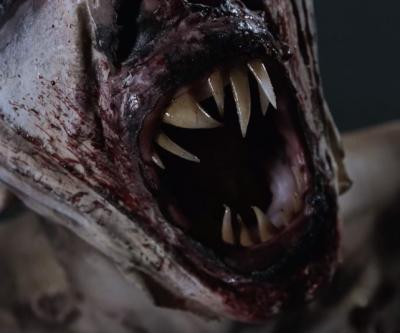 Don't have much interests really, I am an animal of instinct and merely does things that simply benefits...well, me. Namely trying to satisfy a horribly insatiable appetite for meat and surviving by any means necessary. Sure, there are a few things of interest but they are secondary matters to me.

However, there is an interest that is level with my needs, an interesting tale about a hunger that can never be truly satisfied. The legend of the Wendigo.

The wendigo is a legendary creature appearing in the mythology of the Algonquian people. Many meanings can be interpreted but the tale of the Wendigo seems to be about greed, as well an association with winter and the icy cold weather that accompanies it. The plural for it is Windigoag.

A Wendigo is creature that was once a human who had eaten another's flesh, this act results in that human becoming possessed by a malevolent spirit, the wendigo is said to be extremely thin but incredibly strong and is notable for its very ravenous hunger but no matter how much it eats, it remains unsatisfied and still appears starved to death.

In the horror-comedy "Ravenous" the Windigoag are healthy looking and they get stronger with each human eaten, as they absorb the person's soul and thus gain their strength but their hunger becomes stronger and more ravenous as well, a character in the film says "the more they eat the more they want"

Windigoag don't nearly have as much exposure as Vampires, Witches and Werewolves, indeed any knowledge of them by today's generation would likely be from a game called "Until Dawn" which features Windigoag as the main threat. The lore is close to the source in that evil spirits target those who commit cannibalism.

Windigoag have featured in tv shows such as Supernatural and charmed, in the latter, they are more or less similar to Werewolves.

I'm an individual who believes in respect and honor, but while some small respects should be given such as good etiquette, always thanking the waiter after he serves you someone's severed head! Ahem.. where was I? Ah right, respect should certainly be earned first as you cannot just expect someone to respect you when you have done nothing to earn it. I always give my word and my word is my bond which can either be a good thing for me or a complete disaster, which is what I am currently stuck in. I am not actually new to this site, I took a break years ago and when I say break I mean I didn't want to come back, but when you ask for a favor, you have to repay it. This was not originally my profile either, it has been through two people at least before it was given to me along with an enforced duty. Nothing has changed here, it feels less populated but the issues are the same.


Some say I am insane, some even said I said that, which is not true, I only said I wanted to eat their liver.
I say I am just a just ahead of them and that curve.

As a lunatic once said: "we all go a little mad sometimes".
The reason people say I'm insane is due to my behavior and mindset. I can be gleefully deranged and affable or demented and vicious the next. Genius and madness are two sides of the same coin...unfortunately I got a bit of madness on the genius side of the coin too.

I believe that might can make right, it is the key to reshaping the world but unfortunately everyone who gets enough power to make a good change just ends getting drunk of it and becoming a tyrant, leading to another rebellion. Other than that I don't have much in terms of belief, I see no higher meaning to life. I guess I am what some would call a Nihilist. Nihilism is latin for nothing. I am not a fan of labels but that would be the closest thing to me there is, survival is the name of the game for me, nothing else matters.

Life is full of strife and all you need is a knife or a scythe to kill your wife. >:)
I have no idea why I just said that. Do you?

What does a crazy person do with all the time in the world? the same damn thing from five minutes ago with the same damn results!! Why won't this circle fit into the triangle!?! and why does an orange look orange? it does not make any sense at all. Bananas are not called yellow! Clerk I will have Oranges with some fresh greens, yellows and purples..
I want vodka now....

The Coven I am stuck in.

If you got decent information and it is more than a few sentences, then higher your rate will be.
If it is just pictures or nothing but a few sentences then you will get a lower rating, especially if the only sentences is asking me to message you to find out about you. As you will read on many profiles, asking to be messaged for information will net you a lower rate, we don't want to go through the trouble of messaging you. You don't have to give private information, just the tradition likes/dislikes and hobbies.
Going by tradition, coven mates and friends may get a higher rating though I don't have too many of them.