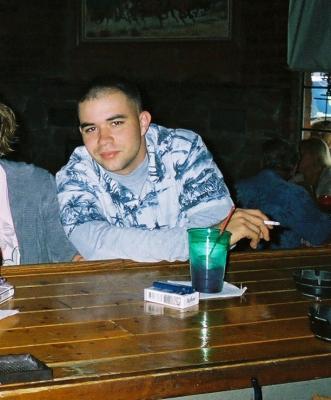 Do not shake, dear hands, for how you would shake if you knew where I take you next.

Awarded by my house Mistress Darkness Bound. I'm quite proud of it.

Crest of the LBO Level Master

Special thanks to my Bahjau for her help with the background and colors. They're not there anymore, but I choose to leave this thanks up.

How's it going? Hopefully well. People call me Voodoo, but that was taken. I'm happy with VoodooChild though. I don't practice voodoo, if you're wondering (though I do believe in it to an extent), I've just got this sort of luck when the card drops that people think must be magic. But, when you stroke Lady Luck just right, she'll stroke you the same.

I've trained heavily in Muay Thai, Krav Maga, and Kapu Kuialua. In my travels, I've also dabbled in Escrima, Tae Kwon Do, Wing Chun Gung Fu, and European Fencing. All from the source, mind you.

Speaking of the source, I suppose it's time to talk about religion. Mine is...eclectic. I follow the old ways of my tribe (Seminole), but bring to that my learnings in Zen Buddhism, Nordic Paganism, and that little bit of occult dabbling.

Equally as important as religion to me is honor. Some people ask who has the right to say what honor is. Well I'll tell you. Honor is decided by those to whom it is not an idea, but a living thing. Those who live and die by it. Those like me.

I have a large colletion of knives and swords and such. The centerpieces of these are: a World War II Gurkha Khukri (AYO GURKHALI!); an AK-47 bayonet given to me as a gift from an Iraqi National Guard officer; and a commisioned katana hand made in Japan.

I also dig guns. Quite a bit. An armed population is a safe population. Bang bang!

I'm very proud of my heritage, which is that of a Seminole warrior. I say things like injin, redskin, etc. Don't get your panties in a wad about it. I do because I can, and I can because I do. Think about it. Red Power!

I speak several languages, for several different reasons. Be that work, heritage, or just wanting to know them. I've been to 26 countries on 6 continents. One of these days, I'm going to set foot on Antarctica and finish it off.

I still research the supernatural. More specifically cryptozoology. The study of creatures thought to be extinct or never to exist. I.e. Bigfoot, Nessy, Dover Demon, Mokele-Mbembe, The Chupacabra, etc.

I write, alot. But I never finish what I start. I get about halfway through a novel, and get distracted by another one. One day, I'll publish about six at once.

I hope I didn't bore you to death. Please, feel free to let me know what you think. Leave some constructive criticism. Or just say hi.

Some more interesting facts about yours truly:

-I have taken the lives of other human beings.

-I can keep a shot group from a rifle (without telescopic sights/scope) within an eight inch circle at 300 yards.

-I'm a small time movie star with a whole two lead roles under my belt (neither released).

-I brew beer, and have for about 4 years now. In another three monts, I'm going to turn that into a career.

Well, that's all folks. I can't think of anything else I really want you to know. If I do think of something, I'll be sure to pop it up or something. If you liked this, let me know. If you didn't, let me know. I also accept constructive criticism, insults, threats, and Chuck-e-cheeze tokens. I'll leave you with the legendary Fiddler's Green, and some pictures and junk.


Fiddler’s Green
Halfway down the trail to Hell,
In a shady meadow green
Are the Souls of all dead troopers camped,
Near a good old-time canteen.
And this eternal resting place
Is known as Fiddlers’ Green.
Marching past, straight through to Hell
The Infantry are seen.
Accompanied by the Engineers,
Artillery and Marines,
For none but the shades of Cavalrymen
Dismount at Fiddlers’ Green.
Though some go curving down the trail
To seek a warmer scene.
No trooper ever gets to Hell
Ere he’s emptied his canteen.
And so rides back to drink again
With friends at Fiddlers’ Green.
And so when man and horse go down
Beneath a saber keen,
Or in a roaring charge of fierce melee
You stop a bullet clean,
And the hostiles come to get your scalp,
Just empty your canteen,
And put your pistol to your head
And go to Fiddlers’ Green.

Me and my crew.

This is my mother and my best friend Bex. Both of them deserve a special place here, and I wish I knew the words to say how wonderful they are.

This goes out to those who’s souls will eternally rest in foreign sands. They say we’re doing it for our country when really, we’re doing it for something more than that. We’re doing it for the person next to us. I would do anything to bring you back to us, but it is not to be. Rest well brothers and sisters, your job is done.


On 12 March, 2006 SGT Amanda Pinson, a 21 year old cryptologic support soldier with the 101st Airborne Division, and more importantly my good friend, was killed during a mortar attack on her camp. At her funeral, protestors from a church in Kansas gathered at the St Louis cemetary bearing signs that read "Thank God for IED's" and "God hates your soldiers". In response to this, a group of over one hundred American veterans and avid Harley Davidson riders gathered between the protestors and the funeral procession, bearing American flags to show their support and shield the family from the protestors' dispicable actions. Amanda, you will be missed. Your life was a blessing and your sacrifice will not be forgotten. AIRBORNE!

feel free to add me please let me know so I can return the favor :)