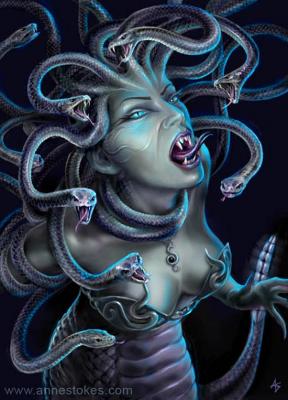 Hello, I am not new to Vr. I was in a coven I didn't like so I was given this profile. I deleted my other one, so I am not breaking TOS.

Let me see, about me. I am senior in high school and a geek.My boyfriend is already attending college. Yes, I want to go to college. I am looking into different ones right now. I want to become a registered nurse. I like jazz,disco and blues. I frequent the french quarters in new orleans. I wish I could live there. Maybe someday I will. My hobbies are quilting and needlepoint. My grandma taught me how to and I really enjoy it.

One of my interests is medussa, or should I say the three gorgon sisters. The whole turning to stone with one look is fascinating.

I just copied and pasted this information about ny user name since it was easier than trying to write it myself.
Stheno (Greek: Σθεννώ, English translation: "forceful"), in Greek mythology, was the eldest of the Gorgons, vicious female monsters with brass hands, sharp fangs and "hair" made of living venomous snakes. The daughter of Phorcys and Ceto, she was born in the caverns beneath Mount Olympus. She and her sister Euryale were both immortal, and the third sister, Medusa, was mortal.
Of the three Gorgons, she was known to be the most independent and ferocious, having killed more men than both of her sisters combined. In Roman mythology she became this way by standing with her sister, Medusa, when Medusa was cursed by Athena. Medusa was cursed by Athena because Poseidon took favor with her in the Temple of Athena. Athena was furious, but not with Poseidon. As a powerful male god, this would be expected of him. In the eyes of Athena, it was Medusa who deserved to be punished. As a punishment, she was changed into a terrible monster. Stheno tends to be depicted as a thin gorgon monster with red snakes curling around her head instead of hair.

THE GORGONES (or Gorgons) were three powerful, winged daemons named Medousa (Medusa), Sthenno and Euryale. Of the three sisters only Medousa was mortal, and so it was her head which King Polydektes of Seriphos commanded the young hero Perseus to fetch. He accomplished this with the help of the gods who equipped him with a reflective shield, curved sword, winged boots and helm of invisibility. When he fell upon Medousa and decapitated her, two creatures sprang forth from the wound - the winged horse Pegasos and the giant Khrysaor. Perseus fled with the monster's head in a sack, and with her two angry sisters following close upon his heels.

According to late classical poets, Medousa was once a beautiful maiden who was transformed by Athena into a monster as punishment for lying with Poseidon in her shrine. However, early Greek writers and artists, simply portray her as a monster born of a monstrous family.

The three Gorgones were depicted in ancient Greek vase painting and sculpture as winged women with broad round heads, serpentine locks of hair, large staring eyes, wide mouths, the tusks of swine, lolling tongues, flared nostrils, and sometimes short coarse beards. Medousa was humanised in late classical art with the face of a beautiful woman. In mosaic art her full face was wreathed around with coiling snakes and adorned with a pair of small wings sprouting from the brow.

The poet Hesiod seems to have imagined the Gorgones as reef-creating sea-daemones, personifications of the deadly submerged reefs which posed such a danger to ancient mariners. As such he names the three petrifyers daughters of dangerous sea-gods. One also bears a distincty marine name, Euryale, "she of the wide briny sea". Later writers continue this tradition when they speak of reefs being created where Perseus had set the Gorgon's head and where he had turned a sea monster to stone.
In other motifs, the Gorgon Medousa was a portrayed as a storm daemon whose visage was set upon the storm-bringing aigis-shield of Athene. The two ideas were probably connected, with sea storms driving ships to destruction upon the reefs.
Some say there was a but a single goat-like Gorgon, a daughter of the Sun-God, who was slain by Zeus at the start of the Titan-War to form his stormy aigis shield.
In older motifs the Gorgones were probably connected with Demeter Erinys (the Fury) and the three Erinyes. These were the bringers of drought, the withering of crops and the coming of famine. In myth the beheading of Medousa saw the release of two beings - Pegasos (of the springs) and Khrysaor (golden blade). This story might have represented the ending of drought with the release of the waters of springs (pegai) and the growth of golden (khryse) blades of grain. Demeter herself was titled Khrysaoros in Homeric poetry, further suggesting a close link between the name and blades of corn.
The link below is where I got this info. and it has lots more there too.
http://www.theoi.com/Pontios/Gorgones.html

I also love my two pets cupcake and twinkies,lol

A fun thing I like to do is dance in my room to disco when no one is looking,lol

You have been Rated and Viewed By ThunderMoon 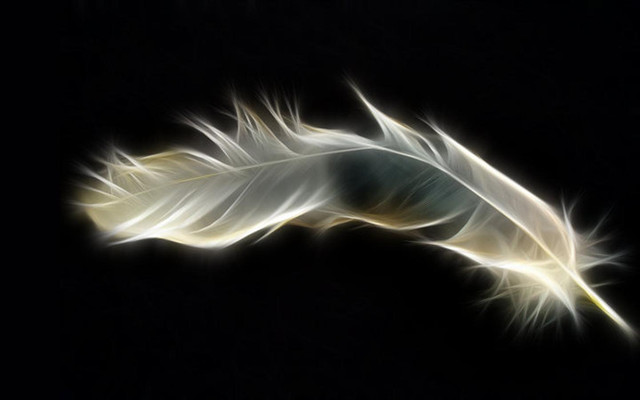