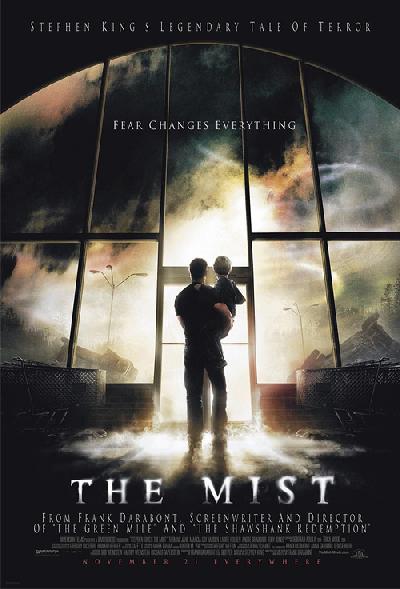 It takes place in Maine. It must be written by Stephen King.

David Drayton (Thomas Jane) and his family retreat to their basement to ride out a storm. The next morning they emerge and head into town to get food and supplies. While they're shopping a strange mist rolls in and it's unclear what it is. Most of the shoppers decide to stay inside. Those who venture out don't return intact.

More terrifying than the creatures waiting for their prey outside the store are the humans within it. The Mist is not just another B horror flick. It's an examination of human nature. The film's thrills come from following the characters as they fight the unknown, fear, and falling into insanity. Some turn to God, others to science. Those who choose denial are the first to die.

Have you read the short story by Stephen King? It's rare for a film adaptation to be more grim and bleak than its source. The Mist is going to be very polarizing. People will talk about it. The original short story had an ambiguous ending. That doesn't happen here.

Will Stephen King fans be upset? Some will. But that would have happened no matter what. What director Frank Darabont gives moviegoers is an ending they can talk about.

The Mist has an ending with balls.