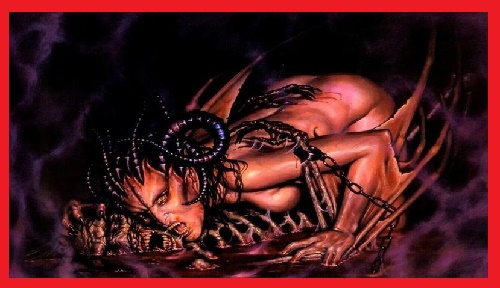 if you are a member of Vampire Rave, that mean, you are into the occult. Some members will say "is just curiosity", but, deep inside you, you are part of a world, full of legends and folklore. The most interesting topic are Demons. Let's discuss the Succubus, which is a demon in female form which had sexual relations with sleeping men. There is an ancient and widespread belief that supernatural beings can mate with men and women, and in the middle Ages, it was though that fairies could unite with mortals. What do you think? Do you had any experience with a supernatural
being? Can modern time, be only a shadow and demons are super active?

I'm not in the occult, however I do know about this subject. Demons come from a Mother Demon named Lilith.
Even saying her name, which most do not correctly and that's a good thing because if they did, attracting her to you is never a good thing. Some vampiric people believe they came from her, but there's no real validation at all in that claim. You're basically saying you're a Demon. In Jewish Teachings, which is where her story comes from originally, it is told from a Rabbi that she came from a realm of Absolutes, and she was feeding from Adam's "holiness". He was directly tied to Heaven and Earth in that time. She was not his "first wife" at all. She was banned from Eden because of the feeding that was happening. That's the story. Demons are as real as Angels and apparently a Rabbi is saying there's a demonic society underground as well. If a Rabbi is saying this....then that means there's proof in the pudding because, they don't make such claims without some legit source for it. Demons can more or less deceive Mankind in SOOOO many ways. They do it all of the time. But not if you know your information correctly.

Ahhh Lilith. When someone brings her name into a topic, they must mention Asmodeus. Which Jewish tradition says he was fathered by Adam or a fallen Angel upon a female demon such as Lilith or Naamah. Lilith has been identified with the serpent, origin of all evil. In another guise, she appeared to men in dream as a beautiful woman and caused nocturnal emissions.

Actually no Markus. Jewish Tradition doesn't teach about "fallen angels" at all. That's Christian teachings. Total difference. Jewish teachings say that Angels cannot "Fall", because they were already made perfect and they were not given FREE WILL do to so. Only Man was given those choices to either rise or fall themselves. So that story about Satan falling is actually false because it's Christian teachings. Which Jews view as Pagan teachings. Satan is still very much an active Angel of what we call God, as the Accusing Angel which still mimics the whole "Tempting" for your soul's downfall bit. Once people start believing there's an opposing force of God (which there isn't really), then that's where Pagan stories come into play.

Cool. But, they teach about NEPHILIM, which are a race of giants said to have dwelt in pre-Israelite Canaan, relates that the "sons of gods," i.e., divine or angelic beings, took mortal wives; verse 4 continues, "It was then, and later too, that the Nephilim appeared [lit., were] on earth–when the divine beings cohabited with the daughters of men, who bore them offspring. They were the heroes [Heb. gibborim] of old, the men of renown." This could mean that the Nephilim were contemporaneous, but not identical, with the offspring of divine beings and earthly women, who were called gibborim (so, e.g., Morgenstern, in HUCA 14 (1939), 85ff.). The above translation, however, follows an ancient tradition in equating the Nephilim and the gibborim as offspring of the union of *angels and mortals . Religions of any form, is so fascinating.

we saw the Nephilim there—the Anakites are part of the Nephilim—and we looked like grasshoppers to ourselves, and so we must have looked to them.”

In Jewish Teachings, Nephilim is a meaning and word that often gets misunderstood.
https://www.chabad.org/parshah/article_cdo/aid/1987422/jewish/Nephilim-Fallen-Angels-Giants-or-Men.htm

Click that link and that should help you and others understand what it really means.

Can this be true?

Here's the thing, and this is an explanation that I was given. When it comes to the subject of God, if you didn't grow up learning the Jewish Teachings or Traditions, then you probably know very little when it comes to say...anything related to God, Demons, Angels and everything in between. Why? Well let's talk about it.

Back when our Creator made himself known, he worked with Moses in Egypt. Moses was put to tests, matching up his abilities to other magicians pretty easily. They had their Gods, and Moses had THE God. That was proven by these random tests and the big deal came when offerings were put forth. THE God, showed that he was and is the only God there is and was the most powerful because no other God matched up to what Moses could do. Not to mention the plagues and all the amazing stories for what happened in Egypt.

Now...when Moses was told to write the Torah, this Torah interestingly has what is called the Bible Code. It has sacred numbers and so forth that can be used and has been, and what they found was words that pertained to the future. The word Holocaust, and other words & names was discovered within it. With that said, you wouldn't be able to do that with other Bibles because edits have been made. The Torah...they take every word, every letter so seriously, that NOTHING has ever been changed. That's why it works, and why it's called a PROVEN Divine Document.

Now, most 1 God religious people both agree and accept the Jewish Teachings because they BOTH share links to what was given to Moses. That, they will NEVER deny. So when we look at the 1 God base religion, why do we look to everything else under the moon and stars besides Jewish Teachings? Doesn't make too much sense if you ask me. That's like, if i wanted to learn about how to repair cars, I would be looking up books on how to make Easter Baskets for that information.

So let's get to the point here. Christians are viewed as Pagans to the Orthodox Jew. The Orthodox Jewish people are not Messianic btw. Those are considered the "lost ones" that were most likely steered more towards Christianity by the Missionaries who make it their job to convert a Jew because in their minds, they score big points if they can.

So let's take the example in this video on the Priest trying to out a Demonic possession. Well to someone Jewish, or learned anyway...the Demon here, is making sure that this possessed person or even the people involved, grab tighter to their faith because the Demon is making sure they believe what they are doing is right by God.

But it really isn't. Why?

Because God's commandment is simply this. "Thou shall not have any other Gods before me."
People assume it means worshipping other Gods. Sure, HOWEVER it also means that if you're saying "Praise Jesus." or "Thank you Jesus" for everything, instead of JUST GOD, which really is the ONLY reason people are here to begin with, the universe, the "other worlds", the spiritual planes, spirits...good and evil...all of it is because our Source of all Creation put it there. It has NOTHING to do with a Man named Jesus.

Hopefully this explains some things. But if not, and you need more, I'll do my best.

"The belief that a god or goddess can appear on the earth in the form of a human is found in many religions. For example, in ancient Greek myths a god or goddess sometimes came to earth in the guise of a human and mingled among ordinary people. In some religions a god can also assume the form of an animal. These bodily forms, both human and animal, are called incarnations. Usually these incarnations are only temporary, and the god eventually returns to his normal form as an invisible supernatural being.

In Hinduism, an incarnation of a god or goddess is called an avatar. Many Hindus believe that avatars of the god Vishnu have appeared on the earth at crucial moments in history in order to save the world from an impending catastrophe.

Other spiritual beings such as the Devil, the angels, demons, and genies can also temporarily convert to a physical body. Thus, although the Devil is normally invisible, he sometimes tries to trick people by disguising himself as a handsome man or beautiful woman. Some people believe that the snake which tempted Eve in the Garden of Eden was Satan in disguise. Other snakes are sometimes regarded as incarnations of demons."

For the following link: https://www.biblestudytools.com/bible-study/topical-studies/are-demons-real-and-what-power-do-they-have-today.html