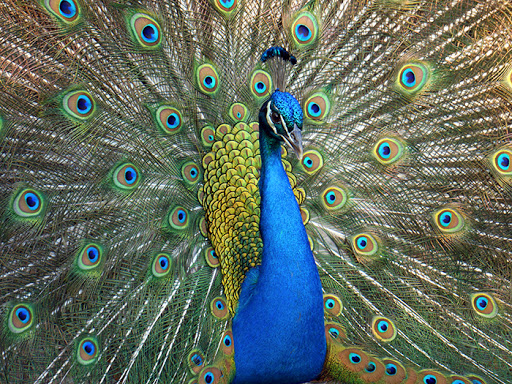 Indian (Blue) Peafowl
The peafowl is native to India, while also displaying significance in its culture. In Hinduism, the Indian peacock is the mount of the God of war, Lord Kartikeya, the Warrior Goddess Kaumari, and is also depicted around Goddess Santoshi. During a war with Asuras, Karthikeya split the demon king Surapadman in half. Out of respect for his adversary's prowess in battle, the God converted the two halves as an integral part of himself. One half became a peacock serving as his mount, and the other a rooster adorning his flag. The peacock displays the divine shape of Omkara when it spreads its magnificent plumes into a full-blown circular form. Peacock feathers also adorn the crest of Lord Krishna, an avatar of Lord Vishnu, one of the trimurti. 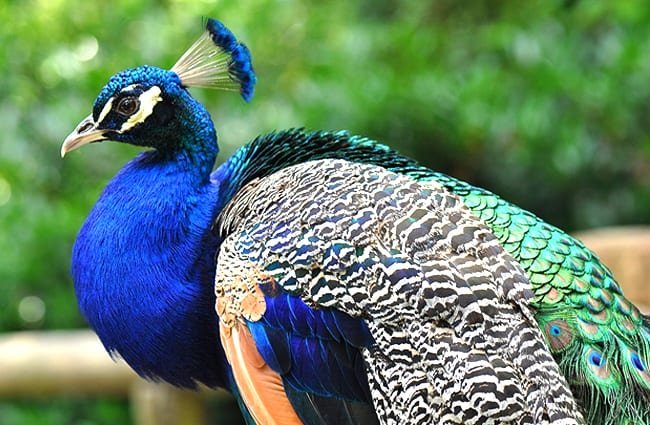 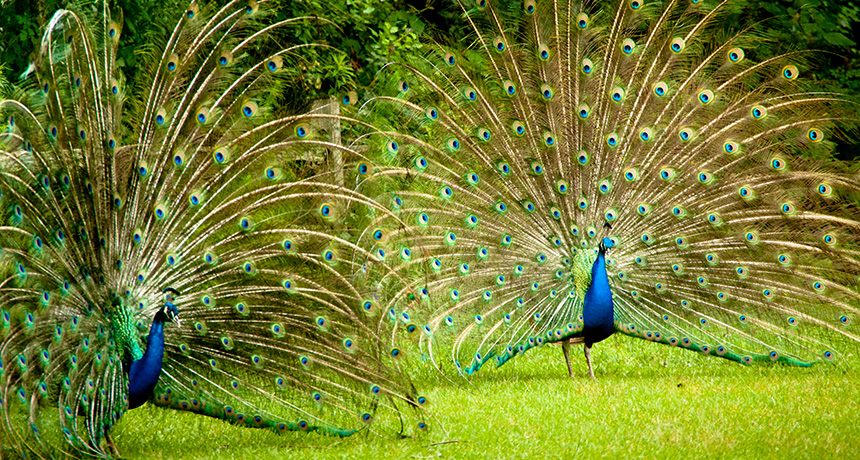 Chandragupta Maurya, the founder of the Mauryan Empire, was born an orphan and raised by a family farming peacocks. When establishing his empire with the aid of Chanakya, Chandragupta ascribed its name as Maurya (मौर्य), translating to "peacock-ness". After conquering the Nanda Empire and defeating the Seleucid Empire, Chandragupta established the uncontested power of its time. Its royal emblem remained the peacock until Emperor Ashoka changed it to Lions, as seen in the Lion Capital of Ashoka, as well in his edicts. The peacocks significance of elegance and royalty pertained in India during medieval times, as it was the Mughal seat of power called the Peacock Throne.

The peacock is represented in both the Burmese and Sinhalese zodiacs. To the Sinhalese people, the peacock is the third animal of the zodiac of Sri Lanka. 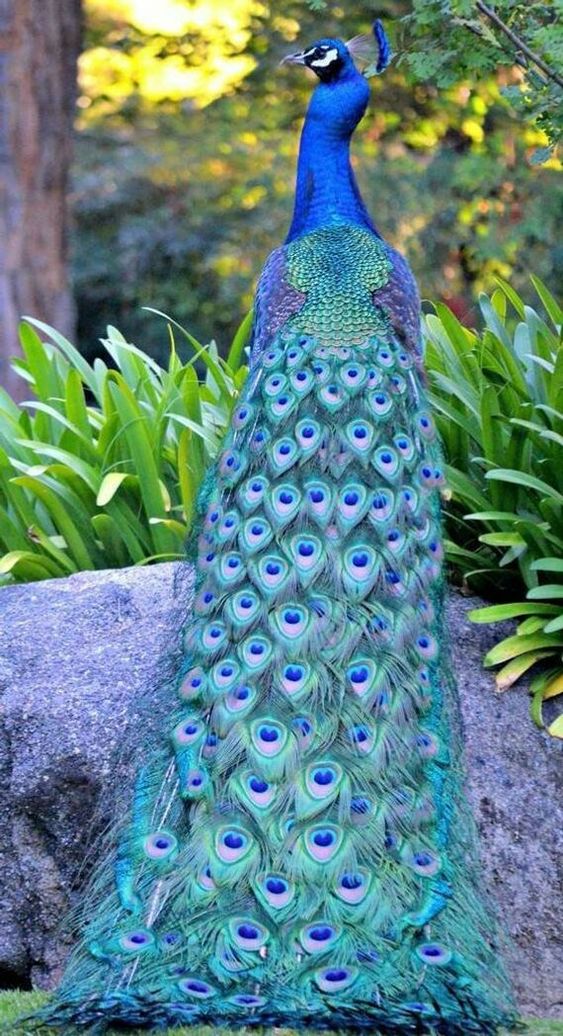 Peacocks (often a symbol of pride and vanity) were believed to deliberately consume poisonous substances in order to become immune to them, as well as to make the colours of their resplendent plumage all the more vibrant seeing as so many poisonous flora and fauna are so colourful due to aposematism, this idea appears to have merit. The Buddhist deity Mahamayuri is depicted seated on a peacock. Peacocks are seen supporting the throne of Amitabha, the ruby red sunset coloured archetypal Buddha of Infinite Light.

India adopted the peacock as its national bird in 1963 and it is one of the national symbols of India.

White peacock
White peacocks are not albinos. They actually have a genetic mutation that is known as Leucism, which causes the lack of pigments in the plumage. A white peacock is technically a genetic variant of the Indian Blue Peafowl. The white feathers on a peacock depend on which genes are dominant and which are recessive. 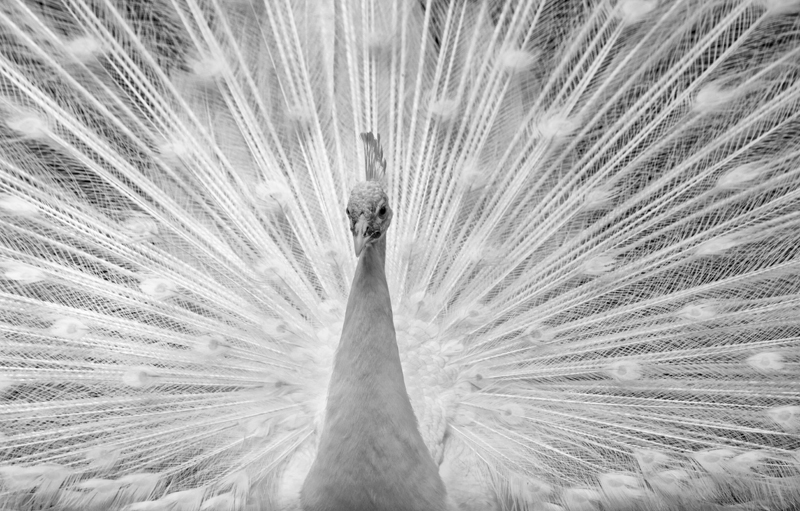 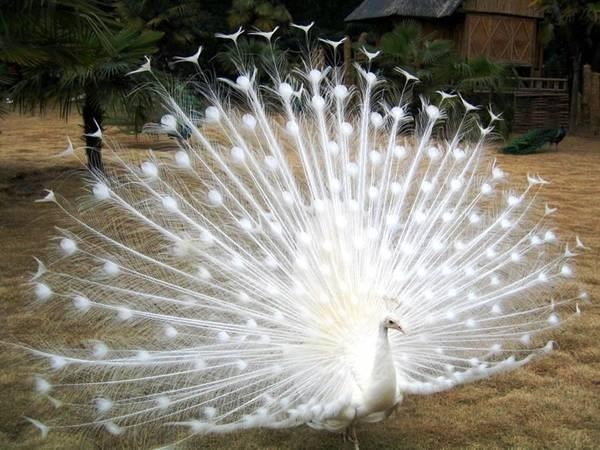 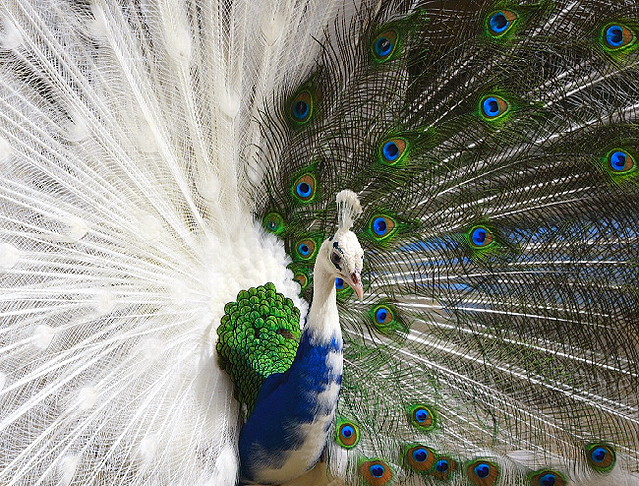 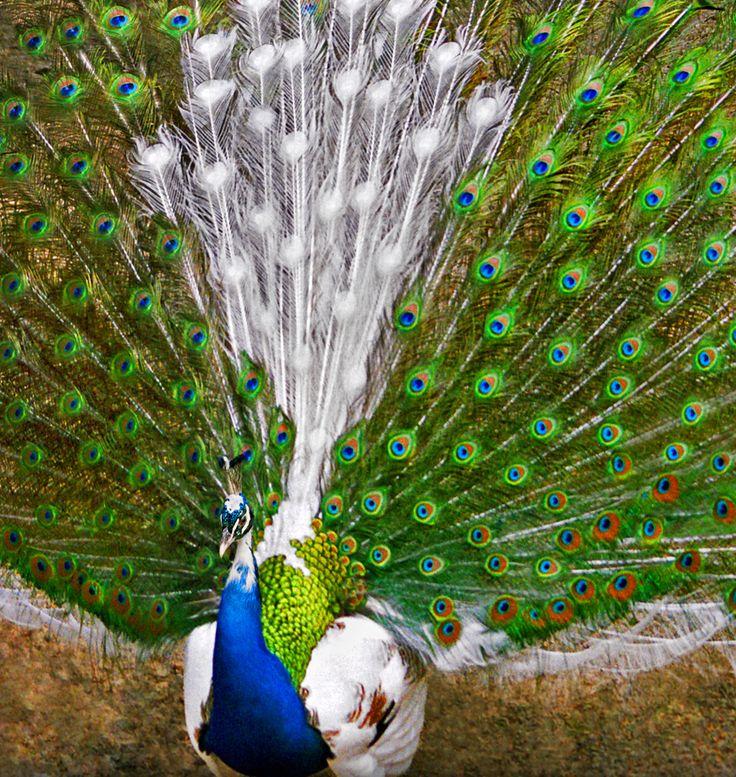 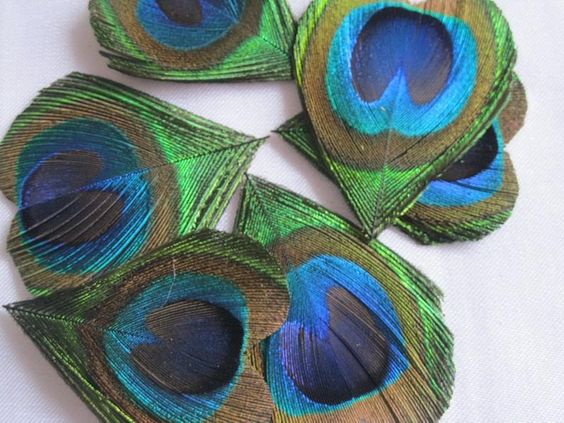 As you know, our Sire's Mark is the Peacock eye feather.

When a peacock struts his stuff, our attention immediately turns to his elaborate plumage with its colorful eyespots. Why and how these dazzling “eyes” evolved has been a mystery—until now.

A new detailed analysis of peacocks and other related birds has found that eyespots evolved to please the ladies—and that the spots have disappeared and reappeared several times over the course of history, according to the study, published July 15 in the Proceedings of the Royal Society B. (Related: “Peacock Surprise: What Females Like in a Male.”)

“These are some of the most extreme evolutionary traits. Some of these birds put so much energy into developing enormous feathers, so eyespots must be pretty important” to their success as a species, Kimball said.

The peacock’s brilliant teal eyespots have long fascinated scientists. Charles Darwin found the eyespots (also known as ocelli) to be especially striking: “As no ornaments are more beautiful than the ocelli on the feather of various birds… they deserve to be especially noticed,” he wrote in The Descent of Man, and Selection in Relation to Sex.