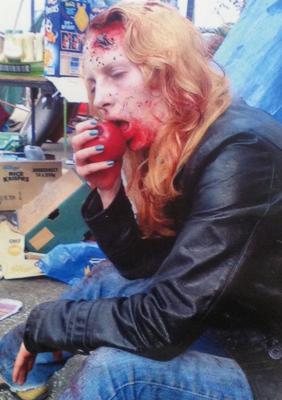 So i have my turkey ready and waiting for next month £9 a pop that's nearly two days wages for me at the moment. But I have one!!! Christmas stockings sorted check. I also have some Turkish delight to boot, not going over board this year.

I was very disappointed to see the v mask being used for violent protest by so many people on Bonfire night. As Bonfire night is one of our oldest traditions in England and to see so many people disgracing it for their own greed to me was shocking. London riots and violent activists not good.

I am not anti austerity here is the meaning

DEFINITION of 'Austerity' A state of reduced spending and increased frugality in the financial sector. Austerity measures generally refer to the measures taken by governments to reduce expenditures in an attempt to shrink their growing budget deficits.

From what I can tell the V mask is an interpretation of Guy Fawkes, now I and many others celebrate his death and burning of his dead body as a traitor who tried to kill King James and overthrow parliament, hence Guy Fawkes Night or Bonfire Night as it is known.

NB. It has been stated that he did in fact commit suicide before the King had chance to exact his punishment, by snapping his own neck, yet they still carted his body through the streets to be burnt.

I have printed out the syllabus lol (mental picture of a bus filled with clowns), for 2016 -2019 for my ABRSM Violin gradings. I have tackled the 1st piece on the list The Armed Man today and have managed to memorise the Scales and Arpeggios for the grade, (I know get me!), which I got by my online violin tutor at the end of last week.

Still its allot to get through and Im worried about the sight reading and aural the most at the moment.

I celebrated with a bonfire, which i toasted my two marshmellows on, with my hand crafted toasting sticks, burnt my Guy Fawkes dolly, ate my venison burger which was delish, and now i have my coco with melllows.