After the paper picture, there is a translation into English.
The real descendants of Bela Botori, or like people used to called him, Count Dracula, only gave one interview, back in 1976. That interview was published and here you will see it. Most of the movies from Hollywood, were inspire from Count Batori. 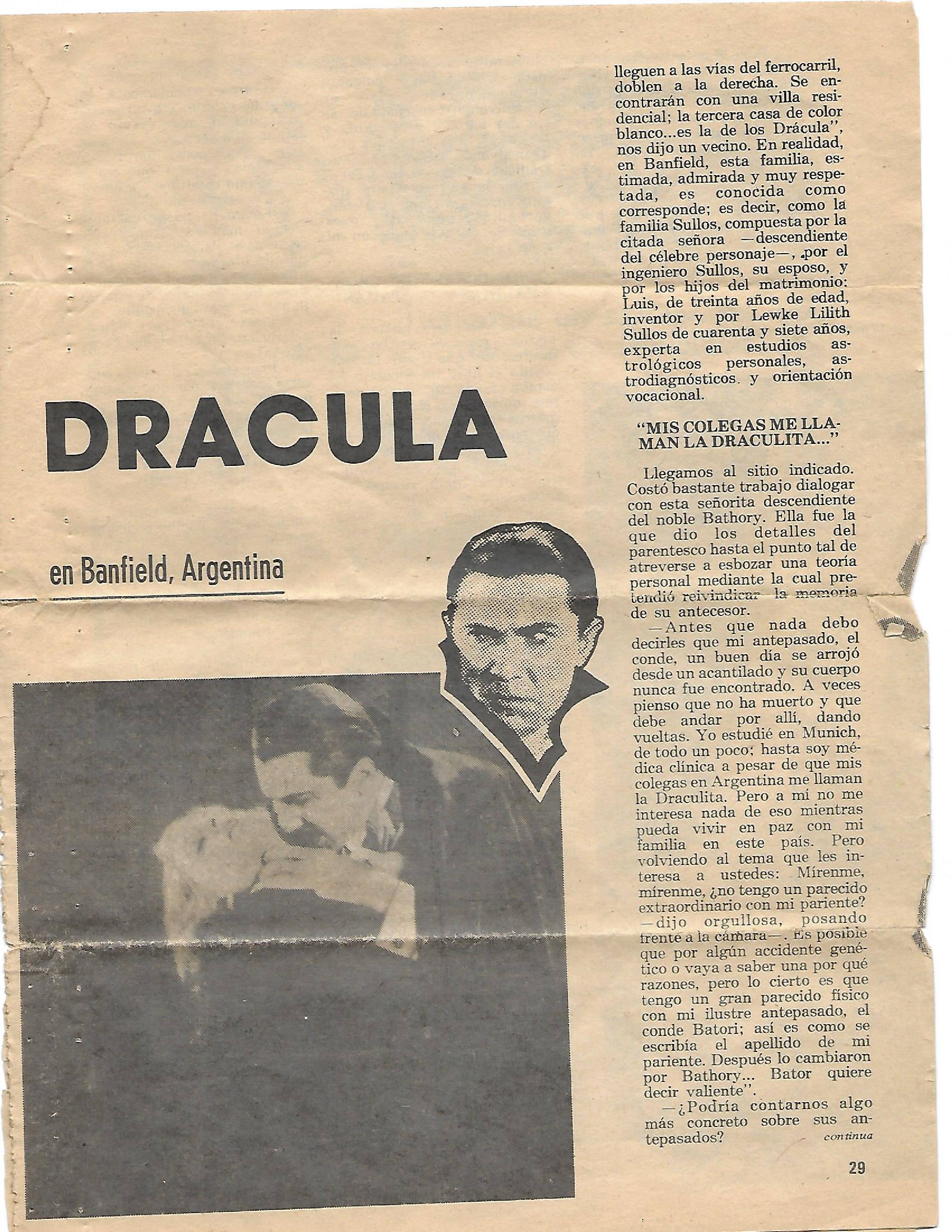 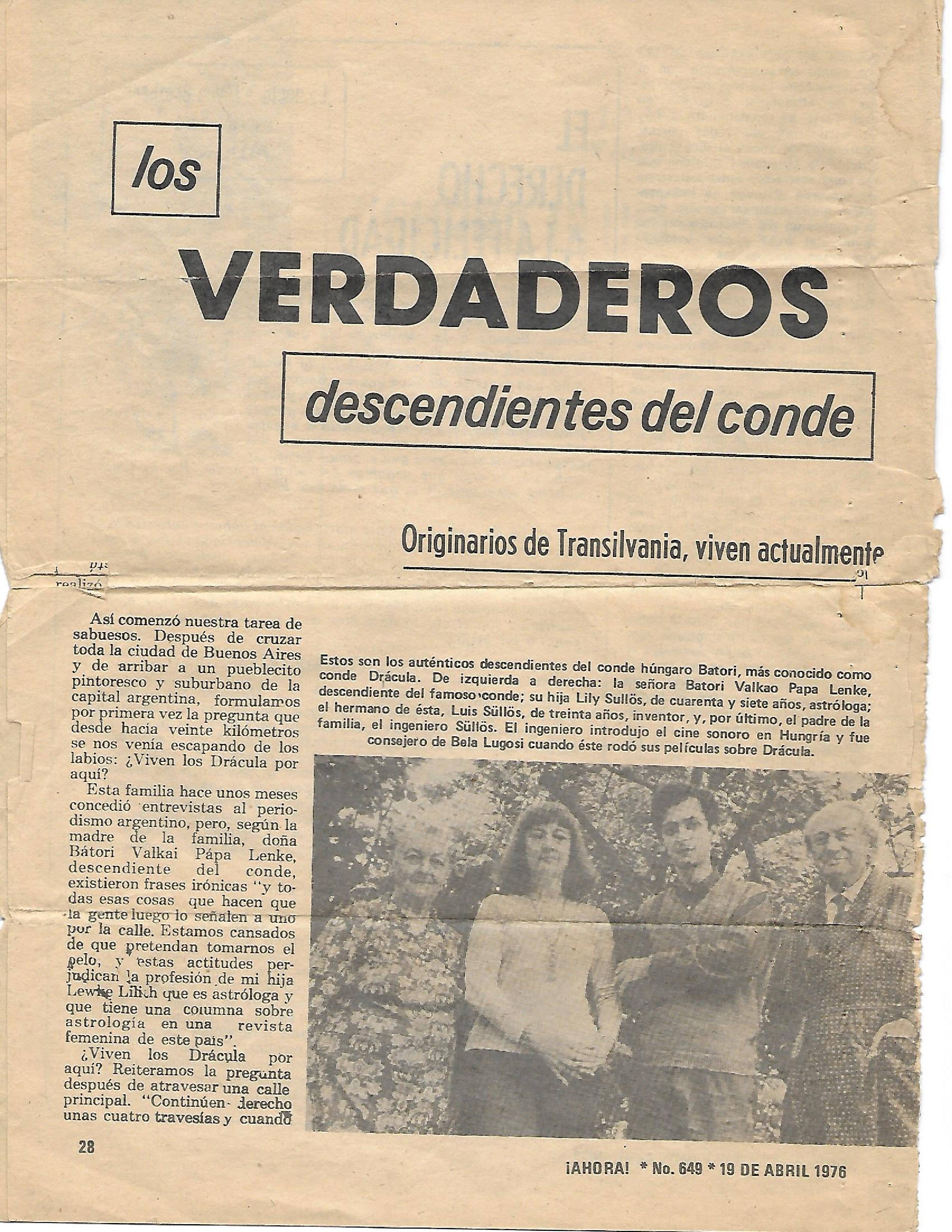 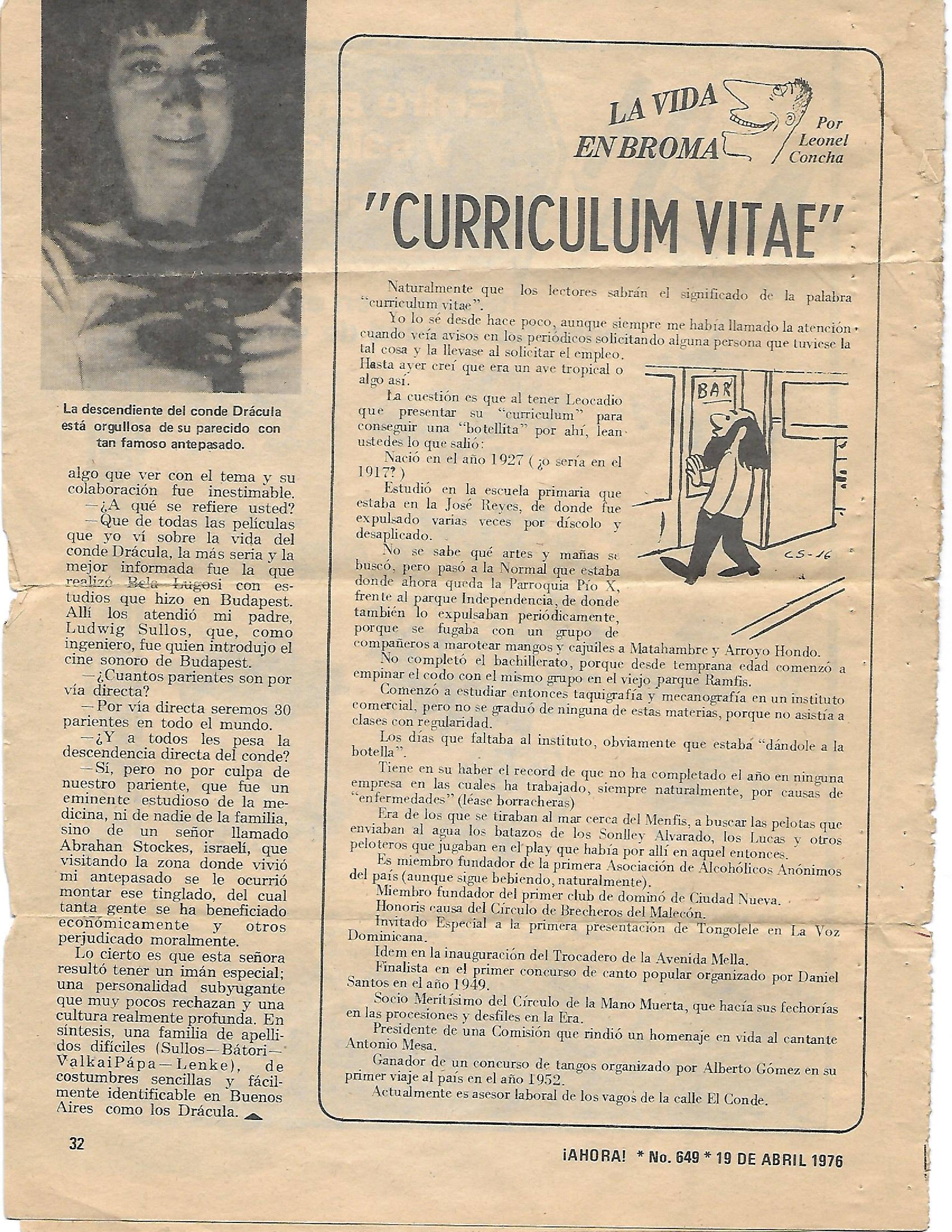 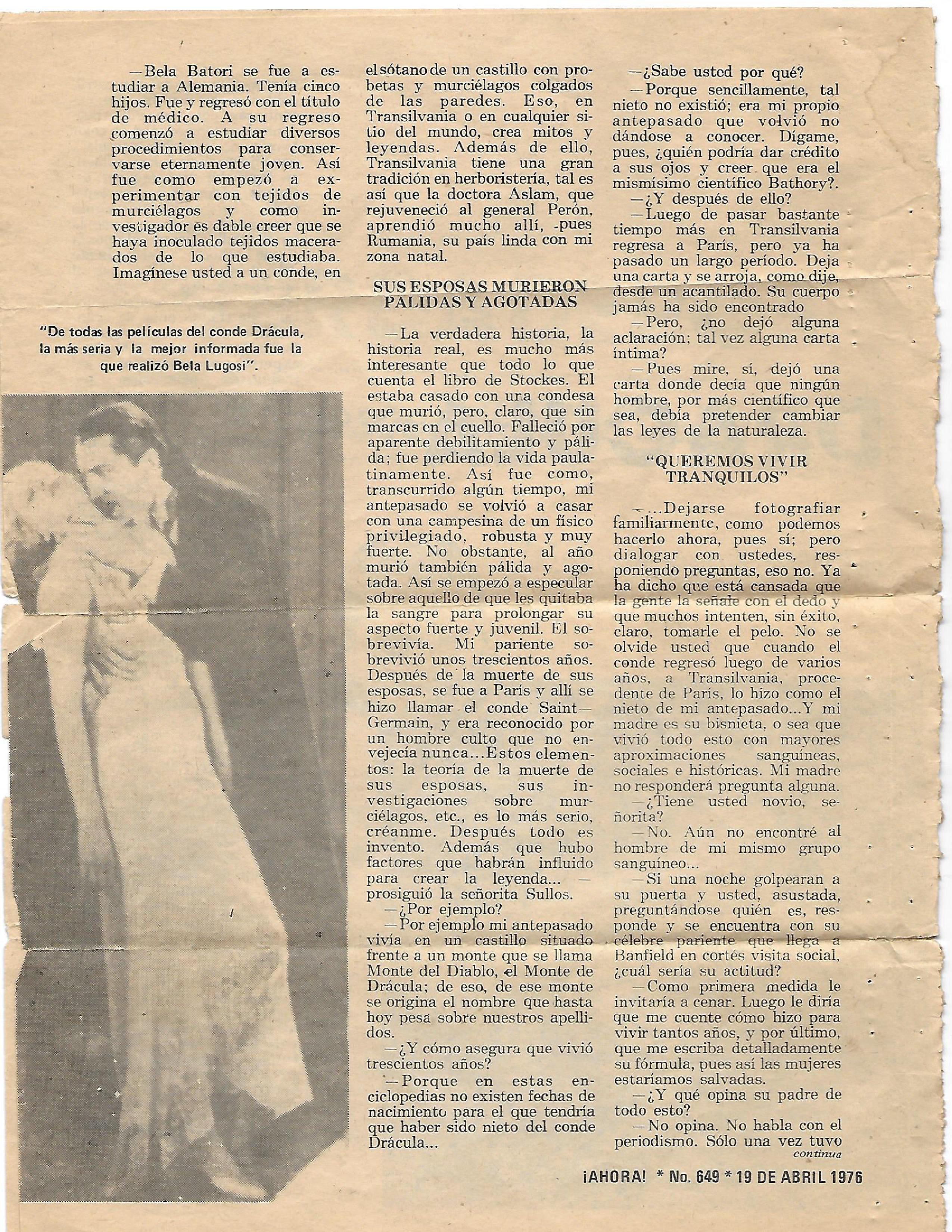 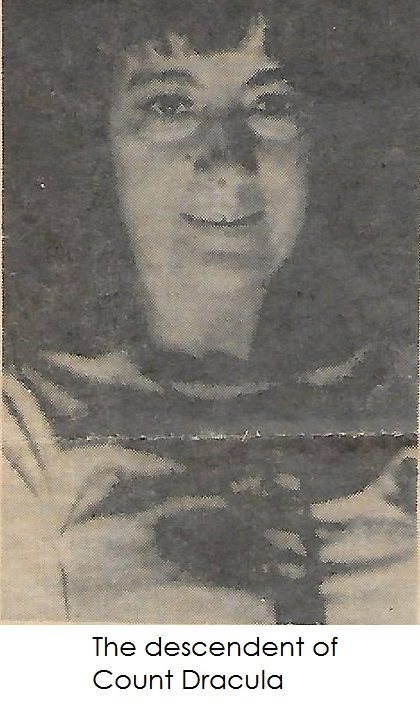 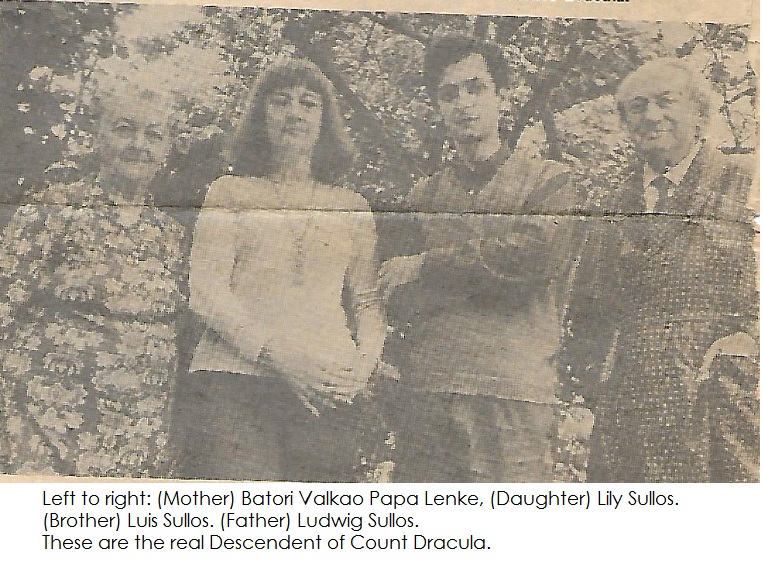 This is how we started our detective’s task. After we crossed through Buenos Aires, We arrived at a small town, eccentric and a suburban of the Capital of Argentina. We asked the question that for 20 kilometers, has been escaping from our lips, “The Draculas, do they live around here”? This family, for the last months, decided to give an interview to an Argentinean’s Newspaper. But, in according to the mother of the family, Mrs Batori Vakai Papa Lenke, descendent of the count, has existed rumors and ironic phrases, “and everything else, that make that the people, later on, point the fingers at us, while we are in the street. “We are tire that people are trying to take advantage and those aptitudes, are not good for the profession of my daughter, Mrs lewke Lilith, who is an Astrologers, and who write a column for a Feminine’s Magazine.

Live the Dracula’s around here? We asked the questions, for a second time, after we passed the main street. “Continue straight, pass four blocks and when you arrive at the train’s track, and make a right. You will arrive at a residential village; the third house, with a color whit, that is the residential of the Dracula’s”, said a neighbor. In reality, in Banfield, this family is well respected, is known, as The Sullos Family, which consist of the mentioned Mother, descendent of our famous character- , by the engineer, her husband, and by their son and daughter from that marriage: Luis, of 30 years old and by Lewke Lilith Suyos, 47 years old, expert in studies Astrological Personal, star diagnostic and orientation’s Vocational.

…My colleagues called me, the little Dracula.

We arrive at the indicated site. Was a hard word, trying to converse with this Mrs., descendent of Noble bathori. She was the one, who gave the best details, about her physical similarity, to the point of saying a theory, which she pretended to brings the memories of her predecessor. Before anything, let me tell you that my predecessor, the Count, one day, throw himself from a cliff, and his body was never recovered. Sometimes, I do think that He never dies, and he is just walking around. I studied in Munich, a little of everything; including medical clinic, despite my colleagues in Argentina, keep calling me ‘the little Dracula”. But, I don’t care about that, as long that I can live happy with my family in this country. But, going back to the topic that is of interest to you, “look at me, look at me, “Do I have an extraordinary similarity with my relative? Said with pride, looking into the Camera. Is possible, that for any Genetic accident, or who knows what others reasons, but, the reality is, I have a great similarity with my illustrious ancestor, the count Batory; this is the way that used to be written. Later was changed to Bathory. Bator, which mean, Brave.

Can you tell us, something more specific about your predecessor?

Bela batory went to study abroad, to Germany. He pro-create five children. He graduates, with a degree in Medicine. When he returned, he started to work some procedure as how to stay young forever. That was when He started to make experiment with tissues of Vampires, and as being the investigator, he injected some tissues that he was studying, into his body. You imagine, a count, in the basement of a castle, with test tubes and Vampires hanging on the wall. This, in Transylvania or any part of the world, will create myth and legends. Besides it, Transylvania has a great tradition in herbalist, like Doctor Aslam, who is keeping General Peron young. He learns a lot, especially in Romania, his beautiful country, which is also my natal zone. All his wives die young, pale and exhausted. The real histories are more interesting than the one told by the book of Stokes. He was married with a countess, which die, but without the mark on the neck. She dies of exhaustion and pale. She was losing her life slowly. This is as how my predecessors remarry with a country woman, a privileged physical, robust and very strong. One year later, she dies, exhausted and pale. This was the beginning of the speculation, that he was drinking their bloods, so he can stay young. My ancestor lived around 300 years. After his wife die, he moved to Paris and there, he called himself, “Count Saint Germain”. He was recognized to be an educated man, which never ages. These elements, the theory of the death of his wives, his investigations with Vampires, etcetera, those were the more serious. After that, everything was invented. Also there were factors that made influence into the legend. Continue Mrs. Sullos. Per example? Per example my ancestor lived in a castle, situated on front of a mountain named, “The Devil’s Mountain”. the mountain of Dracula, from there, that was the origin of the
name, that until today, weighs on our last name.

..Because in this encyclopedia, there is no date of anybody being born, who should be the grant kids of count Dracula.

Do you know why?

Because sincerely, those kids doesn’t exist. Was my predecessor, who keep coming back as someone else.
Tell me, then, Who an give credits, who saw, with their own eyes, and believe, that that person, was the scientist Bathory?
And after them?

After he spent many times in Transylvania, he returned to Paris, but, time has passed for a long time, leave a letter and jump from a cliff. Like I told you before, his body was never founded.

But, he never left a letter of declaration as why?

look, if he wrote a letter, should be to tell, that a men, even a scientist, can not change the law of nature. Don’t forget, that when the Count came back to Transylvania, he came back, pretending to be his grandson. He lived around his own blood line. my mother is the Great Granddaughter of the count, and she will not respond any questions.

Do you have a boyfriend?

No. I haven’t found a man from my Blood line.

If one night, someone knock at your door, and you ask, Scare, Who is, and the response is, “is your descendent, Count Dracula” giving a social visits. What will be your attitude?

First, I will ask him to stay for diner. Later, I will ask, How he did it to lives for so long. And finally, to write his formula, like so, every women will be saved.

And your father, What is his opinion of all of this?

He got no opinions. Only one time and brought the conversation up and his collaboration was invaluable.

What are you referring at?

from all the movies, that I have seen about the life of Count Dracula, the most serious and the best informative, was the one directed by Bela Lugosi, the knowledge came with the study that he got in Budapest. There, my father, Ludwig Sullos, which like an Engineers, was who introduced the Movie with sound in Budapest.

How many decedents are through the Blood Line?

Through blood line, we are 30 descendents in the whole world.

And all feel the weight of being descendent directly with the Count?

Yes. But not because the Count, who was an eminent Doctor of medicine, neither from others member of the family, if not, from a Mr. Abraham Stokers, Israeli, who visited the place where the count lived, and decided to create that story about the Count, which many people, benefited monetarily and some affected morally.

The real truth is that this Lady, was like a magnet, with a captivated personality. That many cannot avoid and a deep culture.
In conclusions, a family with last name Sullos-Batory-Valkaipapa-Lenke. With a simple customs, and easily identifiable in Buenos Aires, Like the Draculas.