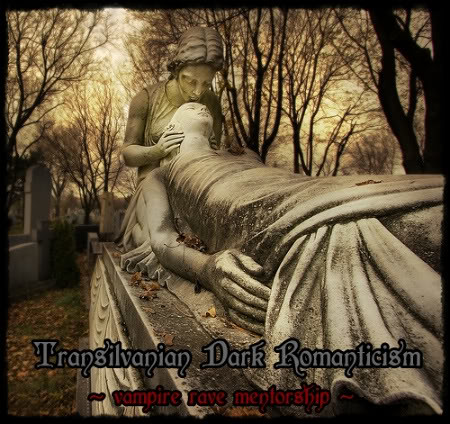 The label Dark Romanticism is used by different people in different contexts, to describe gothic novels from the XVIIIth century as well as music from the 60s and 70s.
"To say the word Romanticism is to say modern art--that is, intimacy, spirituality, color, aspiration towards the infinite, expressed by every means available to the arts."
(Baudelaire)
A dictionary might help us to find some kind of definition.

*
romantic (roman'tik), a. pertaining to, of the nature of or given to romance; imaginative, visionary, poetic, extravagant, fanciful; fantastic, unpractical, chimerical, quixotic, sentimental (of conduct etc.); wild, picturesque, suggestive of romance (of scenery etc.); pertaining to the movement in literature and art tending away from the moderation, harmonious proportion and sanity of classicism towards the unfettered expression of ideal beauty and grandeur. n. a romantic poet, novelist etc., a romanticist; a romantic person; a person given to sentimental thoughts or acts of love.
*
dark [dahk], a. destitute of light; approaching black; shaded; swarthy, brown-complexioned; opaque; gloomy, somber; (fig.) blind, ignorant; obscure, ambiguous; hidden, concealed; without spiritual or intellectual enlightenment; wicked, evil; cheerless; sad, sullen, frowning; unknown, untried (esp. used of a horse that has never run in public). †v.i. to become dark, to be eclipsed. v.t. to make dark; to obscure. n. darkness; absence of light; night, nightfall; shadow, shade; dark tint, the dark part of a picture; lack of knowledge; doubt, uncertainty.
*
romanticism [-sizm], n. the quality or state of being romantic; the reaction from classical to medieval forms and to the unfettered expression of romantic ideals which originated in Germany about the middle of the XVIIIth century, and reached its culmination in England and France in the first half of the XIXth century.
*

Something darkly romantic might be both sentimental and evil, visionary and blind, imaginative and hidden, gloomy and poetic, unpractical and ignorant, unknown and extravagant, fantastic and sad.
From all this definitions could be extracted a very personal one:
dark romanticism [dahk romantisizm], a movement in literature and arts towards the unfettered expression of the decadent natural world and the obscure supernatural world.

Authors use their imagination to depict decadence and obscurity. The characters in the novels, songs and movies wander the earth alone, abandoned by God. It is always winter and the obscure, supernatural world is far away, or just hidden to the ambivalent human being. There are constant interruptions and hesitations in maturation.
The words of Dylan Thomas could also be a suitable definition: "I hold a beast, an angel, and a madman in me, and my inquiry is as to their working, and my problem is their subjugation and victory, downthrow and upheaval, and my effort is their self-expression."

The origin of Dark Romanticism

"The passions which belong to self-preservation turn, on pain and danger; they are simply painful when their causes immediately affect us; they are delightful when we have an idea of pain and danger, without being actually in such circumstances;"
These words by Edmund Burke - Enquiry into the Origin of our Ideas of the Sublime and Beautiful - constitutes the theoretical background of the origin of Dark Romanticism. Burke argued that pain and danger delights us more than pleasure when we are not immediately affected. These ideas inspired not only philosophers and politicians, but also authors and artists.
Fred Botting: "...a darker current within the Romantic imagination's visions of unity and transcendence...The darker, agonized aspect of Romantic writing has heroes in the Gothic mould: gloomy, isolated and sovereign, they are wanderers, outcasts and rebels condemned to roam the borders of social worlds, bearers of a dark truth or horrible knowledge, like Coleridge's Ancient Mariner. Milton's Satan or Promotheus are transgressors who represent the extremes of individual passions and consciousness. Blake's mythical creations, the tyrant Urizen and the suffering Los, inhabit a violent world of fire and struggle. Drawing on the anti-rational and mystical powers associated with a bardic romance tradition, Blake's poetic mythology values liberty, especially of the imagination, above any restraint, particularly of religious and political institutions. Byron's heroes, and his own impersonation of the Byronic hero, passes the defiant energy of a Gothic villain."
In the late 18th century, authors reacted against the Age of Enlightenment and it's blind materialism and faith in reason. The artists reacted against classicism and preached - in contrast to the Age of Enlightenment - feeling and, imagination. Inbetween the Age of Enlightenment and the Romantic era, Burke wrote the famous words. Horror and terror tales became popular. Authors reacted against both classicism and the gothic novels. They wrote about the tragic dimension of human life. The genre Dark Romanticism was born. Famous names are Blake, Baudelaire, Poe and Stoker.

The Darkly Romantic era didn't end in the XIXth century. From being a purely literary phenomenon it has spread to other artistic fields in the XIXth and XXth century influencing other cultural currents.
Changing features, emphases and meanings disclose Dark Romantic writing as a mode that exceeds genre and categories, restricted neither to a literary school nor to a historical period. The Darkly Romantic movement is harder to distinguish today. Successors are harder to find then predecessors.
Dark Romanticism hides within other movements. Modern artists often express the need for something more then the reality they know - the lack of imagination in the world outside them torments them. Longing for the obscure and the fantastic hides within the sad tales of a bleak reality. Artists expressing decadence have been apprehended as romantic and even visionary.

What is the menu for today?