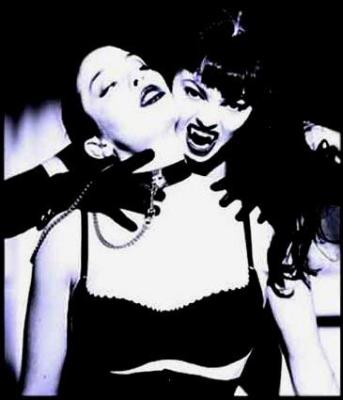 I'm Not Going To Hell....Just To The Un-Air Conditioned Part Of Heaven.

Wanna Play With My Spider? Just Move Your Cursor Around Him & He'll Chase It. =)

I have my music player set up to NOT auto-start, so it doesn't affect how the page loads and so you aren't forced to listen to my crazy ass music, lol. =)

Well, where should I start? Introductions are always nice right? Some of you might know me from before. My previous names on here have been ViolentViolet and VioletDreams. I changed it to AlwaysViolet because Violet/Purple is kind of my thing and my online names will most likely Always have something to do with that. It seemed like a creative moment at the time.

They say you wear different hats when with different people....although I am always myself, this is also true. When I'm on here I take all my hats off and let my hair completely down.

**Neat Little Random Stuff About Me**
*I've liked Vampires since at least age 7*
*I recently got a tattoo gun and have used it to re-shade my husbands tattoo and to give myself my very first tattoo*
* I can write in cursive upside down and backwards*
*The white of my eyes are a very light blue due to a bone disorder*
*I collect oriental themed art and niknaks*
*I love Angels, Butterflies, Fairies, and Unicorns*

Glitter Graphics - Topglittergraphics
*I am the proud owner of a 1973 Super Beetle, yet don't drive*
*I love to draw, paint, and write, although I pretty much have no time to do any of these anymore*
*I can be in the middle of a bad situation and almost always turn it around to move forward*
*I was baptized and raised Catholic, I do believe in God..but I don't "force" m religion on anyone and will never criticize anyone for what they believe*

Glitter Graphics - Topglittergraphics
*I like to drink occasionally, I don't smoke anything*
*I love photography*
*I'm a photobucket addict, lol*
*I actually drink 8 glasses of water a day*
*I do belly dance exercises*
*I think the female body is a work of beauty and should be worshiped as such*
*I think Love Making is more than just sexual intercourse, and my hubby and I are always Making Love*

I am getting ready to celebrate my tenth anniversary with my husband on October 28th. You might know him on here, his name is ViolentVance. We both have our passions..his are not limited to but include politics, legalization laws, Chicago Bears football, and all that other legality/mafia/super manly fun stuff. RAAAAWWWR!!! AND OF COURSE ME! ;) Where mine include but are not limited to loud music, horror movies, suggestive clothing, and all that other rocker/bad ass chick nifty stuff! RAAAOOOWWWR! AND OF COURSE HIM!!! ;) ;) ;)

I have been blessed with three wonderful children. My boys are ages 10 and 5, and my girly is age 9. I don't like to share much about them unless it is with some one I know and most likely have met. I am a very proud mommy! Pretty much everything I do is literally for them, and watching them develop into their own little crazy selves is very enriching.

The first coven I was ever in was The Coven of Darkness Incarnate. They still are and will always be family to me. I made a lot of really great friends in that coven before it was disbanded and I will forever adore them all. =)

Coke or Pepsi.....definitely PEPSI!!! I don't even really like mountain dew all that much, but it's a regular around my house due to my husbands caffeinated beverage drinking problem, lol. The only drink comparable to Pepsi for me WAS the Pepsi Clear, that isn't even around any more *sniffles*

And I freaking love LOLCATS, in spite of my fondness for grammar and correct spelling. Let's all just remember that cats cant read, write, spell, or speak English. But they sure can look cute and allow silly people to add hilarious captions to pictures of them.

I am a Christmas Baby, actually born on December 25th, 1980. So to provide the answer to the usual question "So, did you get ripped off for presents?" I don't really feel like I did get screwed out of any gifts, my parents were usually separated and I got to have Christmas sometimes twice a year, once with each side of the family. I was mostly raised by my grandparents, got bounced back and forth between my mom and my dad...so which ever grandparent was around did whatever parenting they could, for better or worse. I am especially close to my moms mother, this awesome woman has been running a household and working pretty much full time since her children were babies. That was until her stroke in 2004, now she pretty much just sits back and relaxes. Lets others take care of her for a change, which is something I feel is owed to her anyway....just wish she didn't have to get sick to receive it.

Although I am not really musically skilled, I do love music. Music is many things for me....it's an escape, it's memories, it's a mood adjuster, self esteem booster, great motivator, and soooo much more. You probably wouldn't expect all this from the types of music I listen to, I prefer the stuff with lots of screaming and angry feelings. I think it's so I don't start screaming and succumbing to my own angry feelings. The inner hostility is strong with this one! =)

So I will now attempt to name as many as I can of the musical artists that I like....trust me the list is probably a lot long than whatever I actually put here because I always forget a few.

I don't have much time in my life as a wife and mother of three to watch much television, but I do like a select few shows. I usually get hooked after shows are in their second season because that's when I usually find out about the, for example I just started watching the series TRUE BLOOD. I'm having to watch last season just to get up to speed, and it's a pretty cool show. The same thing happened when I found out about DEAD LIKE ME, which was an awesome awesome show.

Now movies...now that is a different story. Movies you can record, rent, buy or go see after the wee ones have gone to bed or go to Nanna's for the night, yeah right! But seriously, movies me encanta.... Dead Like Me: The Movie, The Crow,Resident Evil 1, 2, and 3. Underworld 1, 2, and (as soon as I see it) 3. Ultraviolet, Silent Hill, Bram Stokers Dracula, Labyrinth, Memiors of a Geisha, Hero, Ginger Snaps 1 and 2, and Ginger Snaps Back. Near Dark, 300, Van Helsing, From Hell, Interview with a Vampire, Edward Scissorshands, Nightmare Before Christmas, The Corpse Bride, and pretty much anything by Tim Burton! 30 Days of Night, The Village. SLC Punk, Merlin, Twilight, Pirates of The Caribbean. Both Willie Wonka and The Choclate Factory and Charlie and The Chocolate Factory. The old original Superman Movies, all the Batman movies. Heathers, Spirited Away, Kiki's Delivery Service, Howls Flying Castle. Go, Dazed and Confused, The Forsaken. Friday the 13th, all are classics! 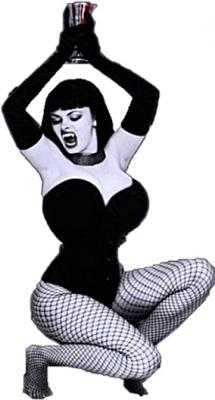