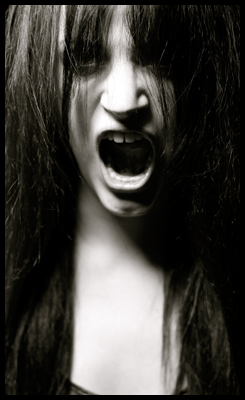 If you let them make you, they'll make you Paper-Mache,
At a distance you're strong, until the wind comes,
Then you'll crumble and blow away."

I will not impose upon you an extremely fancy background or my music preferences. I prefer to keep things simple.


Isn’t it interesting to know that no matter how clearly I define myself in this fancy text box, people will walk away from this with their own impression of me that may be very different from my own? Being as such, I think I’ll abandon
all elaboration at the beginning and just give you a...

I am a pretty reserved, awkward person in real life. I tend to put my foot in my mouth often. Well, not the whole foot perhaps, but at least a few toes on a regular basis.

I’m quite an introvert, and I tend to keep to myself for the most part. However, with the people I consider my friends I am loyal, animated, and quite the conversationalist and jokester.

I am a creative person. creating is my lifeblood. I almost always have a pen in hand to satisfy my compulsive need to doodle. I enjoy drawing, painting, photography, Photoshop, Illustrator, and Flash.

I am a Computer Programming major, and with that comes in interest in everything computer-related, from computer architecture to programming languages to the evolution of technology to web design.

I have been known to write on occasion when I have the focus, and I usually have a million and one story ideas bouncing around in my head.

I also have a keen interest in all realms of science, and hope to one day get a second degree in biology.

I have a fiendish love for good books, good food, and good movies.

If there is one thing I have learned in life, it is that blood does not dictate the line between family and friends. I decide where that line stands. There are some members of my family that will never feel like family, and some friends who have never felt anything but.

I’ve been in love with the same guy since I was 15, and we’ve been together for five years now. He is my nerd, just as crotchety and cynical as I am. Ours is a unique love story involving crippling insomnia, an 8-hour time-zone difference, cross-dressing, a student-visa, two changes in residence from one country to another, a few flight cancellations, an emergency landing, and one giant dog.

I have never been considered a typical person for my age. People who know me well often call me an “old soul.” I’ve been told I belong in a different era. I’m not a square by any means, I just have manners and enjoy drinking tea. I like bookstores more than department stores. I rescue insects from the middle of sidewalks so nobody will tread on them. Popular culture does not particularly interest me.

That's pretty much it. I think you'll find out that, despite being a little weird, I am a really nice, down-to-earth type person. I'm a left-handed, right-brained, grumbly little nut. :)

"“Three passions have governed my life:
The longings for love, the search for knowledge,
And unbearable pity for the suffering of humankind.

Love brings ecstasy and relieves loneliness.
In the union of love I have seen
In a mystic miniature the prefiguring vision
Of the heavens that the saints and poets have imagined.

Love and knowledge led upwards to the heavens,
But always pity brought me back to earth;
Cries of pain reverberated in my heart
Of children in famine, of victims tortured
And of old people left helpless.
I long to alleviate the evil, but I cannot,
And I too suffer.

This has been my life; I found it worth living."


I do not confine myself to any organized religion or any organized political party (Or to any manner of organization at all). I vote based on the competency and honesty of the candidates and whether they are going to protect and advocate the things I believe in personally. I take my issues as they come, and try to read between the lines and see things from every angle. I do not vote for anything unless I have investigated all the details thoroughly.

I think the modern government’s greatest flaw is that it has evolved into an entity separate from its people, untouchable in many ways, and often not answerable for, or transparent in, the things it does. I also think that there is more than one way to govern a country, and that there is no “one-size-fits-all” perfect type of society. Socialism thrives in some cases where capitalism would fail in a heartbeat, and vice versa.

All that being said, my political boner seems to lean left with most issues, the most important ones being the protection of scientific endeavours from religion, gay marriage rights, protecting the environment, and the government’s duty to protect and aid its people.

As far as religion goes, I am respectfully agnostic, split right down the middle. I can argue for the possible existence of God just as well as I can argue against it. I can see the good and evil in organized religion, and I defend everybody's right to believe what they believe, as long as it doesn't interfere with the well-being of others.

I believe that politics, science, and religion should be kept entirely separate from each other, none impeding on the progress or endeavours of the others.

I strive to live a Buddhist way of life. Beyond the things I can control, whatever will be will be. The best I can do is be true to myself, respect the lives of all things, and live a life of integrity and fulfilment.

We are but flawed mortal specks of sand in an incomprehensibly vast universe. I know that there is infinity beyond our physical perception and mental comprehension, so I am always striving to keep my mind open.

I believe in constantly challenging your own beliefs. Questioning your truths, arriving at new ones, and then questioning those in turn. Never become too comfortable in your opinions or too stuck in your ways.

When it comes right down it, my motto on religious and political issues is merely:

"The soul should always stand ajar, ready to welcome the ecstatic experience."

Some things I ♥ in general:


I go in mainly for fantasy, science fiction, dystopian, as well as gritty books with flawed characters, weird situations, or an interesting message. I also really enjoy mythology.

I take my movies very seriously. I appreciate all the elements that make up a good film: a good script, cinematography, direction, acting, set design.

I really like Alan Lee's set design work in Lord of the Rings. It is his work that sparked my interest in illustration/art direction. All that being said, I also have a guilty little love for shitty disaster films. :)

Some of the movies I enjoy are:


Of course I enjoy music. Who doesn't? I won't say the usual "I like everything except for rap and country." I can generally appreciate the art behind any genre of music, even the ones I don't care for personally. I usually gravitate towards rock/blues/instrumental music.

The bands I listen to most often are:


I am not one of those who thinks of watching TV as a mindless activity. I never understood why film was considered an art, and not television. I think right now is a great time for television, with talented directors, actors, and screenplay-writers giving it more attention. I have a few shows I follow regularly, and quite a few that I watch idly.

Some of the TV shows I dig are:


Video games are awesome. I am unashamedly enamoured with them.

Here are a few video games I really like:

Go placidly amid the noise and the haste, and remember what peace there may be in silence. As far as possible without surrender be on good terms with all persons. Speak your truth quietly and clearly; and listen to others, even to the dull and the ignorant, they too have their story. Avoid loud and aggressive persons, they are vexations to the spirit.

If you compare yourself with others, you may become vain or bitter; for always there will be greater and lesser persons than yourself. Enjoy your achievements as well as your plans. Keep interested in your own career, however humble; it is a real possession in the changing fortunes of time.

Exercise caution in your business affairs, for the world is full of trickery. But let not this blind you to what virtue there is; many persons strive for high ideals, and everywhere life is full of heroism. Be yourself. Especially do not feign affection. Neither be cynical about love; for in the face of all aridity and disenchantment it is as perennial as the grass. Take kindly the counsel of the years, gracefully surrendering the things of youth.

Nurture strength of spirit to shield you in sudden misfortune. But do not distress yourself with dark imaginings. Many fears are born of fatigue and loneliness. Beyond a wholesome discipline, be gentle with yourself. You are a child of the universe, no less than the trees and the stars; you have a right to be here. And whether or not it is clear to you, no doubt the universe is unfolding as it should.

Therefore, be at peace with God, whatever you conceive Him to be. And whatever your labours and aspirations in the noisy confusion of life, keep peace in your soul. With all its sham, drudgery and broken dreams; it is still a beautiful world. Be cheerful.

Strive to be happy.

YOU HAVE BEEN VIEWED AND RATED BY KONA