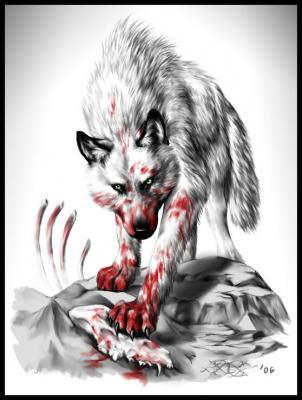 An old Cherokee told his grandson, “My son, there is a battle between two wolves inside us all. One is Evil. It is anger, jealousy, greed, resentment, inferiority, lies and ego. The other is Good. It is joy, peace, love, hope, humility, kindness, empathy and truth.”

The boy thought about it and asked, “Grandfather, which wolf wins?”

The old man quietly replied, “The one you feed.”

7 years ago a wolf met a queen, they were enamored with each other. Talking for days on end without sleep, time apart was not an option for these two. They laughed and cried together over many of their life's experiences and perils, they found in each other the parts that were missing.

Unfortunately for this wolf and his queen distance became an immovable pressure upon them. Time drifted on and the wolfs pups that were left in his care were suffering so the wolf accepted his fate and turned from the queen to raise his pups.

Time passed and eventually the wolf and the queen found each other again. The love was declared by both but it could not be, the wolf had found another. Perhaps this wolf was the fool, perhaps fate had something to say in the matter.

The wolf had two more pups to the woman, their relationship was not a good one. Perhaps at times the wolf did love her, but she was not his queen, and on long quiet nights he would sit and think on his most beautiful queen in a far off land.

At times they would find contact with each other, a day here, a note there but never could the wolf leave the pups he had brought into this world.

And what of the queen, she waited for the wolf to return.

And return he did, to take his place by her side. And it was good.

One day a demon came though, tricked the queen and injured the wolf. The wolf retreated to lick his wounds and regain strength.

And again the queen waited for his return.

The wolf had learnt a lot of what his life was, he returned to be by his queens side. The wolf had no home, his pups were scattered and there was one more lesson for him to learn. He left his queen without warning, disappearing into the shadows to find his way.

He did find his way, he found his pups, bonded with them and they grew to trust him again. They would spend days on end together running through the forest, the wolf teaching his pups to hunt, to survive in this world. And this made him strong.

So now we find the queen, sitting, waiting for the wolf to breath his life back into her. He does return, he assumes his place at the queens side, and the love that had spanned such a long and arduous journey is now free.
The queen and her wolf.
The wolfs queen.

It was never over my love

RIP my friend, this wolf will see you in the next life, good journey xxxx

If i had to rewrite my script, set the scene for the actors to follow, would i change the dream, or hold true the course. If i change the scene will it all fall down, the foundations i have built to keep me grounded.