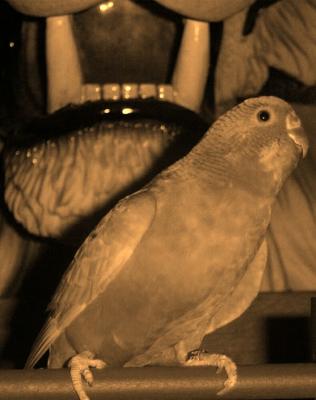 Here to set the record straight about vampires

What I Did Last Summer (and the preceding 2,133 summers).

It happened on a warm August evening.

I was working on ledgers in the basement of my master’s villa. The year was 124 BC. I heard a rustle in the corner, behind the shelves where we kept most of our tablets.

The tablets were valuable because my master was a moneylender and a debtor could avoid his obligation by stealing back the sealed tablet that evidenced his debt.

I grabbed my lamp with one hand and my club with the other. I thought about grabbing my dagger, but killing a customer might mean that my master’s loan would not be repaid.

At first I thought that it was a cat. Her eyes blazed green with flecks of fire. And her hair was bright red, something I had never seen. And she was covered with blood.

I told her to stay still, and I would alert my master so that he could summon a physician. She grabbed me with a blood covered hand that was ice cold. She whispered that she would be alright if I would just hold her for a while. I told her that I could be flogged for not alerting my master, but her green eyes created a universe that was beautiful beyond measure. I willingly fell in.

When I awoke I was dizzy and weak from loss of blood and life force. And naked. She was gone, but I knew that everything had changed.

As the senior apprentice of the most successful moneylender in Athens, I had thought that I had a great life ahead. I had no idea that death would prove infinitely more satisfying.

[For the rest of my story, please see my journal -- I will be posting at least one chapter per week]

I have enjoyed this website, but would like to set a few of you straight on some basic vampire concepts.

First, killing a human is stupid. Being a vampire is a fulfilling path, and killing a human is the fastest way to get the stake jockeys on your trail. Historically, neck biting has never been a priority for law enforcement, as long as you spread it around. Even today, the maximum penalty for grabbing a quick pint would be assault and battery.

Second, the vampire’s best friend is compound interest. At an average rate of 6%, money can be doubled every 12 years. For humans, this is sound money management. For vampires, it usually ends up with owning the bank. And all of the biggest credit card companies are controlled by vampires. For the vampire who invented credit cards, this was a natural extension of his lifestyle.

Third, we rarely create new vampires. Turning is a bad strategy unless you want to risk having the human around for eternity. I do see my sire occasionally, but physical intimacy between two vampires is unsatisfying for reasons that should be obvious. Sorry for crushing the carnal fantasies of many of you, but I am here to share some truths.

Fourth, when you are dealing with thousands of years, an animal can make a good companion. For about 700 years I had a dog, who was my beloved friend until a mob of stake happy farmers got lucky when they ambushed him for “milking” their sheep. I blame myself. I should have spent more time training him not to kill the sheep.

Here is a picture of my latest companion practicing his stalking skills.

One benefit of a parakeet vampire is that it cannot kill a sheep or anything else of consequence. Another benefit is that when I feel like turning into a bat, I have a partner who is always ready for a long night of flying. And what better decoy could I have than a bright yellow parakeet to distract my dinner while I glide in from behind.

I know that my page looks whimsical and happy. Guess what? For a vampire, I am darker than many. If you want to know about real vampires, think Count Chocula. Over the centuries, there’s a lot more to be gained from selling sugary cereal than doing evil (which gets boring after a few hundred years).

Yes, we live among you. And some of us benefit whenever you use your credit card. But in those rare instances in which a vampire gets out of line, a quick call to the Staker (who is basically our equivalent of law enforcement) always takes care of the problem.

Finally, if you are a beautiful woman and walking around with your neck exposed at night, keep looking at the yellow parakeet. Don’t turn around until it’s too late. Except for the minor neck punctures, you will enjoy it, even when the parakeet takes his share.

And as you can see from the final picture below, my pet can enslave humans who he has bitten. Notice how the pathetic human is enthralled by his power. 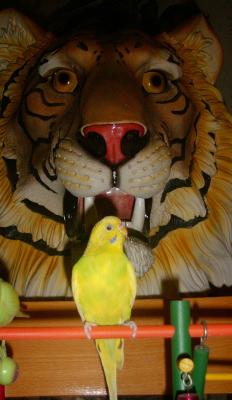