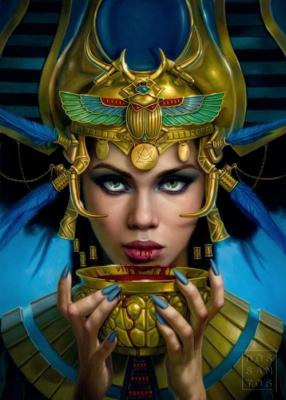 I am not new to VR, I have other profiles here on VR, so please do not send me a message welcoming me to VR. Yes I am happily taken so Back off!!!

I rate in one way and one way only; If you rate me a 1, expect a 1 in return. Block me and you will be blocked as well. For the rest I give out a 10 if you have some content on your profile. In Egyptian mythology, Sekhmet was originally the warrior goddess as well as goddess of healing for Upper Egypt. She is depicted as a lioness, the fiercest hunter known to the Egyptians. It was said that her breath formed the desert. She is known for her power to break down the old and to bring in the new. She was seen as the protector of the pharaohs and led them in warfare launching fiery arrows into battle ahead of them.


She was the goddess who meted out divine punishment to the enemies of the gods and of the pharaoh. In this capacity she was called the "Eye of Ra." Sekhmet's capacity for destruction is well-documented. In one story, Ra sends her to punish those mortals who have forgotten him and she ends up nearly destroying the entire human race. The fields ran with human blood.

However, Ra was not a cruel deity, and the sight of the carnage caused him to repent. He ordered her to stop, but she was in a blood lust and would not listen. So Ra poured 7,000 jugs of beer and pomegranate juice (which stained the beer blood red) in her path. She gorged on the "blood" and became so drunk she slept for three days. When she awoke, her blood lust had dissipated, and humanity was saved.

While she may bring about disease and plague to those who wrong her as the Lady of Pestilence, she is also a master of the art of medicine as she provides the cure to various ailments she may have brought to man. She was the patron goddess of all healers and physicians. In fact, her priests were known to be very skilled doctors. As a result, the gruesome “Lady of Terror” becomes the benevolent “The Lady of Life”. She was mentioned numerous times in the various spells of The Book of the Dead as both a creative and vicious force. However, she is most known as the protector of Ma’at (balance or justice) with the epithet: “The One Who Loves Ma’at and Who Detests Evil”.

All adds and rates will be returned

Very pleased to meet you. Feel free to drop by or write any time. We're open all night...