Attention Life, We Have Lift Off Into Adult Independence....

"Adult independence is the term used commonly to refer to the transition to adulthood when young people are no longer wholly dependent on their parents (financially, socially, or psychologically)." ~ Google

It's simply my belief that Pizza can be eaten at any time....Day or Night.

The most private digital assistant.
Siri keeps your information private and secure — what you ask Siri isn’t associated with your Apple ID. The power of the Apple Neural Engine ensures that the audio of your requests never leaves your iPhone or iPad unless you choose to share it. On-device intelligence makes your experience with Siri personal — learning your preferences and what you might want — while maintaining your privacy. And, of course, what you share with Siri is never shared with advertisers. ~ https://www.apple.com/siri/

Siri is an easy way to make calls, send texts, use apps, and get things done with just your voice. And Siri is the most private intelligent assistant. ~ Google Search

So, taking the advice of a few others, I went from being on #Team_Android to trying out #Team_iPhone not so long ago.

I view a funny skit using the subject of SIRI.

I decided to try it since it's on my phone.

That's when I knew I better change my fucking settings.

Been busy all day assisting my Niece in shipping the majority of her stuff to her new address.

We stopped for pizza and then returned home to Sesh and Chow.

Gonna miss our in-person Seshes, but we are used to Digitally Seshing together and simply chatting about Life's Design. 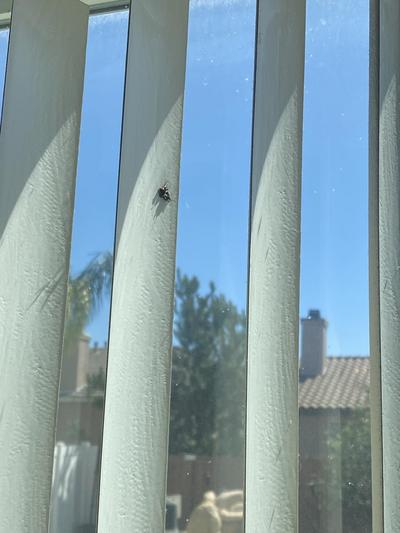 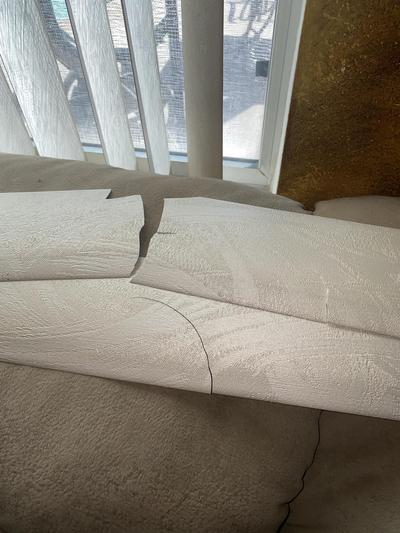 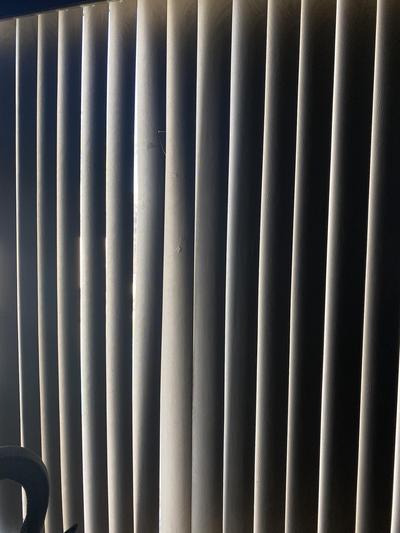 So we're taking both puppy dogs to the groomers today.

They've both been to the Vet. for Wellness Checks and both passed with flying colors.

However, the doctor wants me to be prepared for early signs of arthritis in 6-year-old Bandit as he did feel a little tender around one of his ribs along his lower back so yeah, aging.

My Niece will be launching very, very soon into her new Healthier Independent Life and I couldn't be more proud of her and more READY for it.

When Keeping Your Dream Alive Goes To The Extreme....

Hey, it's my Uncle 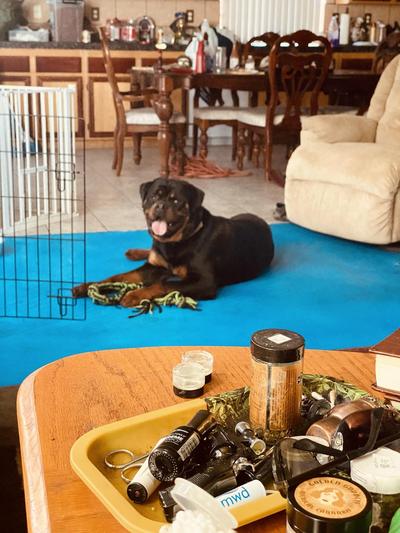 He looks like he wants me to lick his face. 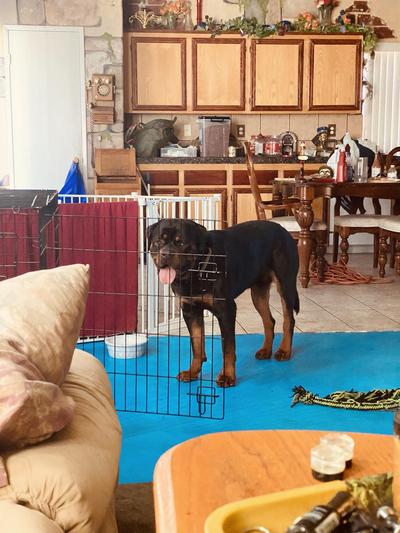 Uncle, I want to lick your face. 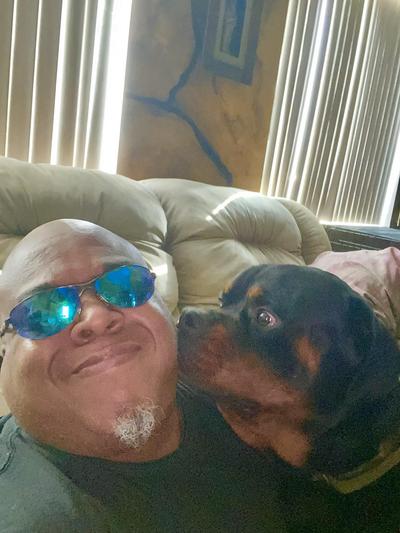 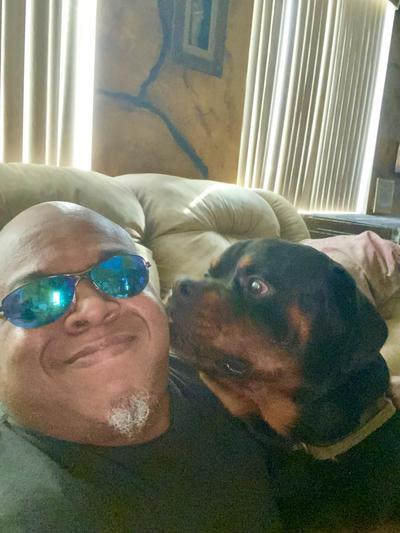 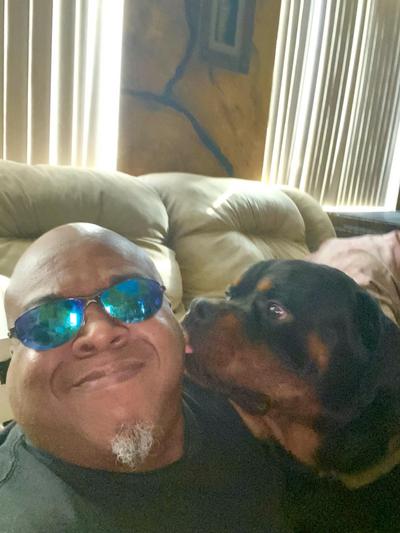 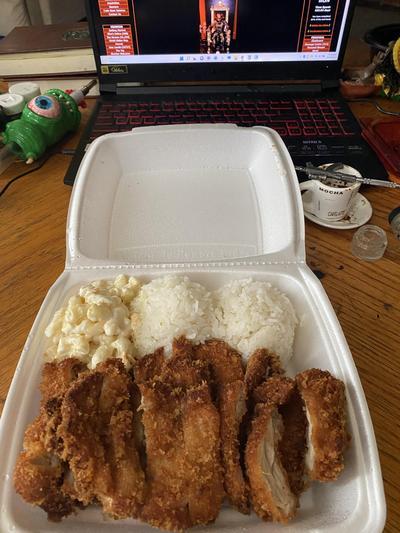 I live a Grateful Life.

I enjoy waking up in my Cal-King Bed, grooming, then heading downstairs and setting up in my Great Room to enjoy food, meds, and entertainment.

I feel Blessed because I know what it feels like not to live this fortunate.

I also know how quickly everything can change due to no fault of my own.

One day I can be eating steak and lobster.

The next day I could be wondering what is that mystery meat assaulting my sense of smell, taste, and sight.

So the Fur Baby is all scheduled for his annual Medical and Dental.

Just waiting on my Niece to schedule her Fur Baby and then maybe we can have both Puppy Dogs scheduled for the Groomers at the same time.

Oh, and not only does she now have an Apartment, but a Car as well. She took her pre-approved car loan and settled on the type she wanted and bought it and also found auto insurance that fits her budget.

Now the only thing left is for her to mail her things to her new address a few days before departing so once home, she doesn't have to wait long for her shipment to arrive and she could just drive to the post office and pick it up and return to her apartment.

Furthermore, with the amount of money she has been able to save while living with me, she estimates she can actually enjoy her New Adult Life a little before starting back to work and without having to touch her Savings, which is AWESOME!

So proud of her.

When they keep sending emails asking for a Review of their Service.

So this is what I sent and posted to Customer Review websites.


THEIR WEBSITE STATED HERE’S HOW IT GOES DOWN
- Give us some details
- Receive an awesome quote
- Meet our car whizzes
- Get paid instantly
- Ta-da! Where there was once an old car, there will now be a fat stack of cash in your hands
- No Hidden Fees!

HERE'S HOW IT WENT DOWN

- Tue: Gave details. Given an ok Quote, but wouldn't call it awesome! Gave my asking price. Given another Quote less than my asking price, but one I was satisfied with, however, I was shopping around and informed them I'd call back in 15 minutes if they were chosen. I called back and someone started taking my information once again and then stopped saying there was a problem and I was informed I would be contacted that day. However, I was not. Nor was any message left.

- Wed: I received an early morning before 8 a.m. call. An apology was given for the delay in calling me back on Tue. The quote given Tue. was re-confirmed. I was then informed that I will be given a check and not cash, but that I could simply go directly to Bank of America and cash the check.

- Thur: The "Car Whizzes" was Antelope Valley Towing Company: R & J Towing. It's a family-owned-and-operated towing company that has been serving the Lancaster, area for more than 15 years. They contacted me and scheduled the removal of my vehicle within the hour since they were already on their way before setting a scheduled time. They arrived within the hour as estimated. Where there was once an old truck, there was now a fat COPART Business Check in my hands instead of a fat stack of cash. Filling out and signing the title and towing away my vehicle all went smoothly.

Although there were no Hidden Fees by SellMax-Cash for Cars, I drove directly to Bank of America and attempted to cash the check, I was told there will be an $8 fee for not having an account with them, but then was told the check couldn't be honored there as of yet since the company had yet to place the check in the system or something like that and that I had to simply deposit the check at my own personal financial institution. When I presented the check to my personal financial institution, they accepted the COPART Business Check and then placed a one (1) business day hold on the release of 80% of the funds.

So in all, it was a good experience, but I feel they need to update their website stating check and not cash is given.

The Behavior of Others......They really Do It To Themselves.

I'm High-ly Medicated so another 3rd Eye Download has commenced.

Never NEED someone in your life to Feel as though you Have A Life.

If you don't enjoy the life you're living is it truly no effort you can put into improving it and being patient or are you being just a bit unfair to your life by comparing it to the Lives of Others and feeling Envy or Less Than?


Is the Bible mentioned in the Constitution?

The U.S. Constitution never explicitly mentions God or the divine, but the same cannot be said of the Nation's State Constitutions. In fact, God or the divine is mentioned at least once in each of the 50 state constitutions and nearly 200 times overall, according to a Pew Research Center analysis. Aug 17, 2017 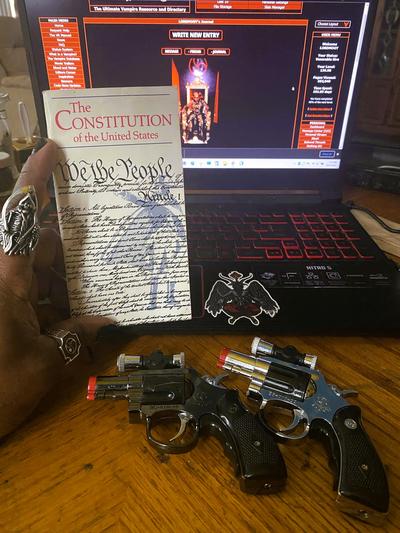 What are the main religions in the USA?

The United States has been called a Protestant nation by a variety of sources. In 2019, Christians represent 65% of the total adult population, 43% identifying as Protestants, 20% as Catholics, and 2% as Mormons. People with no formal religious identity form 26% of the total population.

How many religions are there?

There are an estimated 10,000 distinct religions worldwide. About 84% of the world's population is affiliated with Christianity, Islam, Hinduism, Buddhism, or some form of folk religion. The religiously unaffiliated demographic includes those who do not identify with any particular religion, atheists, and agnostics.

Paganism is spiritual beliefs and practices other than those of Judaism, Islam, or especially Christianity.

And now I'm too High-ly Medicated to edit the thing.

This beast eats and drinks until he's had enough and then flips over his bowls.

Whether they are empty or not. 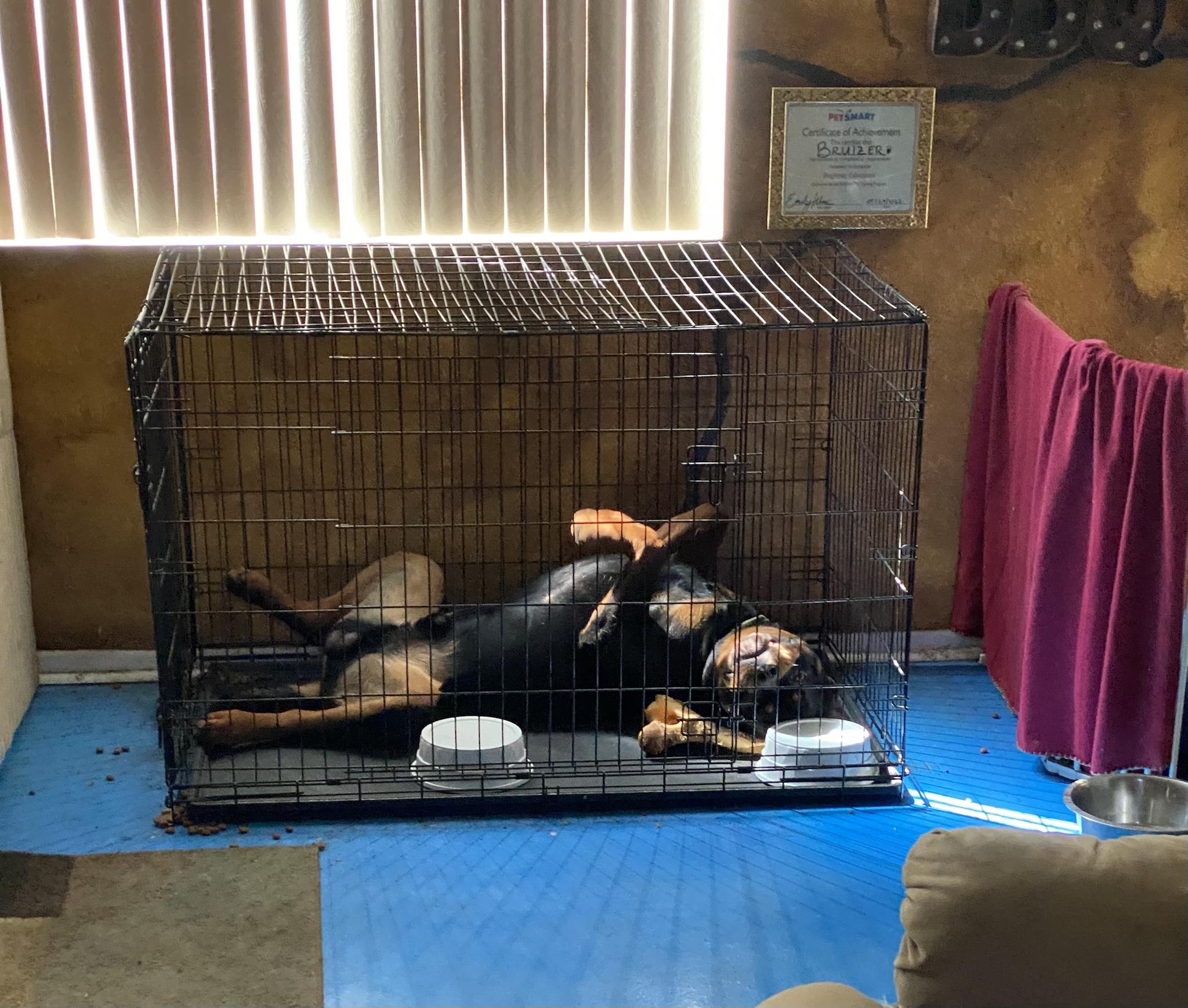 My Morning Workout was over at 10 a.m.

About an hour and a half after I wanted to wake to let the puppy-dogs out in the 102 deg heat so they can make a Nature Call.

Well, they both had clean areas so there was no cleaning up to do. 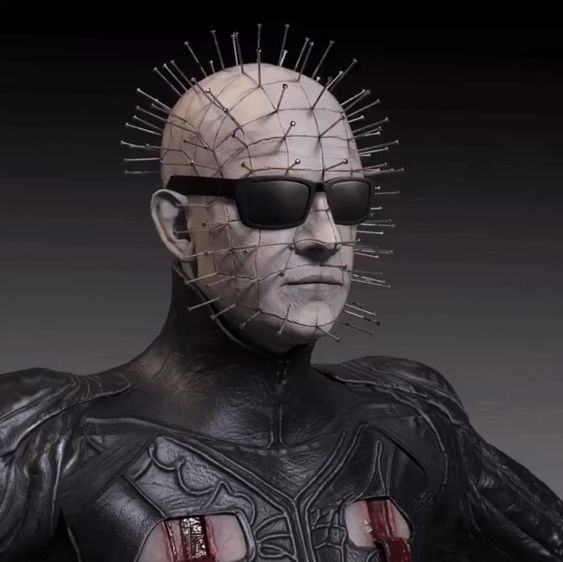 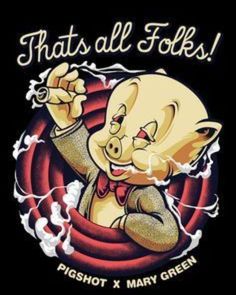 Do you really want a Sugar Daddy? 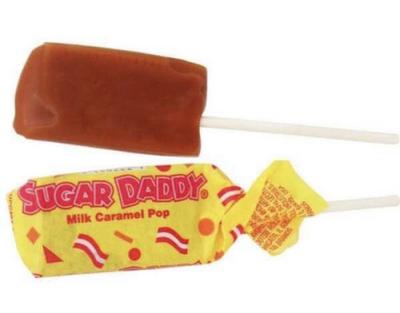 Oddly... I just pulled one out of a candy bag not 5 minutes ago and forced myself to put it back! LOL!

Well, here, they're already limiting how much water one can buy.

So I think I may just make another trip at some point and get a couple more gallons to beef up my Emergency Supplies.

I swear, I buy the same stuff mostly, but now thanks to Inflation, I'm paying $100 more.

I just ate Garlic Pork Roast with a Ceaser Salad.

Maybe it's the Cannabis, but Dayum!!! 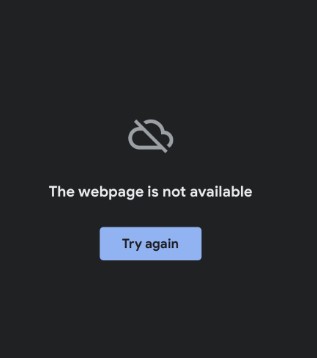 It has ALWAYS been around.

Technology is simply EXPOSING it GLOBALLY.

Of course, the water was on the warm side due to the Heat Wave, but felt really, really good.

Now, back slow cooking in the sauna.

Have we learned nothing from our past?

Running with the devil!