I was on cam earlier tonight for all of, I don't know, maybe 20 or so minutes. It felt like an eternity. I honestly don't know how I used to sit there for hours on end. It most definitely is not an appealing idea now.

I got motion sickness while playing Skyrim. That has never happened before... I only hope it's because I haven't really played anything in first person for a while (I've been watching a lot of Netflix in my downtime, since Chris is busy with work most nights and I have no one else to really game with), and not something more horrible. 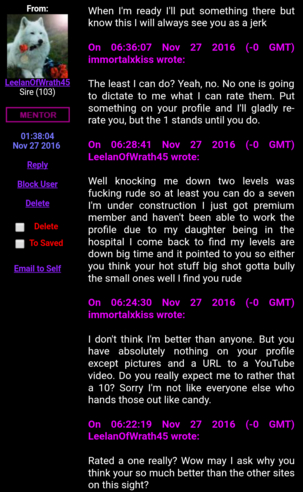 -facepalm- Butthurt over ratings...why doesn't this surprise me? Some people on this website forget that it is, in fact, a website. -shakes head-

For once, how about you mind your own business? I know, it's so hard for people like you, but fucking try it.

It finally came in the mail! The one piece of the puzzle I've been waiting for since August. So, now, I can start getting things back on track, start sorting out my life officially. Honestly, this is the best thing I've had happen in quite a while.

I'm kind of debating getting Battlefield 1. Destiny's gotten so old and I can only play so much Skyrim. Anyone here play it and a fan?

So, I said I was going to be an aunt back in June. Well, unfortunately my sister-in-law and brother lost the baby. But, tonight they invited us over and announced they're pregnant again. Due in late May. I'm so excited! She's in her second trimester, so hopefully this time around things will go really well for them.

I am happy to read that they are expecting again. Congratulations.

Life has a way of balancing things out if they are meant to be....

It's finally been approved on the state level! Now I can actually move forward with my life. I'll be so relieved when I can hold that piece of paper in my hands.

I wrote out my thoughts, my feelings I've had about him. About us. At 3 in the morning, it just all came pouring out. And then I sent it to him. Because, apparently, I am a fucking idiot. He hasn't spoken to me today, hasn't responded to texts... We were doing so well, too. And then I had to be stupid me and let loneliness get the better of me. If I had just written it out for my own therapy, that would have been fine. But, the fact that I sent it to him... I hate myself right now. Just so much self-loathing.

Californians in a nutshell: We're, like, totally so progressive! We legalized the use of recreational marijuana and, like, totally did away with single-use plastic bags! Now everyone has to pay 10 cents for shitty multi-use plastic bags, or buy shitty fabric ones that can cost upwards of four dollars depending on where you buy them. Because, fuck people and making things not cost an arm and a leg. It's California, man, everything needs to be needlessly expensive.

Honestly, this stupid proposition stupid people voted in is, well, stupid. I give it only a few years before it's repealed, just like it was in Los Angeles. Because, while I absolutely agree that people should use those reusable shopping bags, I don't feel like it should be forced on people with a tax for noncompliance. That's just silly.

It is stupid. Besides they claim that it's for global warming, etc. That's a sham. We're actually going through an ice age, which is why the weather is acting naturally wonky. Plus, they'd love to tax the heck outta people.

I read that the Vatican is pushing for a green Sabbath. Where people are forced to have Sunday off, but here's the catch, no one would use electric, etc, on claims to "help the environment ". With the exception of people who work at hospitals, police and so on.

These protests, this destruction, this is what happens when you raise an entire generation in a safe little bubble full of participation ribbons and the idea that everyone's a winner. Where everything has to be politically correct lest you hurt someone's feelings. I'm ashamed to even be part of this generation, the Millennials. They can't handle things not going their way, it's how they were raised, and it's sickening. We need to stop coddling them, because the real world is harsh, and unfair, and you're not a winner just because you think you are. There are no participation ribbons here. Grow the fuck up.

I'm ashamed of my generation too. Now they're stealing the safety pin as a logo? I won't give up my interest in punk culture because some morons took it into PC culture. Wish they had given out gold star stickers instead...

We have given a bunch of idiots chances to run our country into the ground....why cant we give him a chance. The Riots all over are ridiculous.....they will not get their way acting like this...hell they might not get it period....but all we can do if pray and have faith in our system and leader. I am sorry that your state is acting like idiots but your not the only state.

That's what happens when people vote idiots into office. California used to be the greatest state in the union with the best schools, opportunities and weather. I wish people here would kick the idiots out of Sacramento and smack down these entitled little shits who are out rioting.

Texas and Mississippi threatened the same thing when Obama was ekected the frst time. They're still here. All bluster, no bite.

I live in California and it is just a small group of people and not the whole state. Our population is larger than the country of Canada. It means nothing. People are venting. Quit labeling people you don't know. Every election there are people who are upset. It happens in Canada, it happens in the UK and it happens all the time over many things in France. There are a segment of the people who will protest and that is their right. If you don't want to join in fine or if you like who is going to be President. Thing is not all the ballots have been counted yet. The deciding factor is when the Electoral College votes on December 19 but who knows they could change and some take the legal hassle over it. There are no rules in the Constitution about them voting differently. Over 20 states have laws about it or they sign agreements to follow the voting of the state. So until the Electoral College votes the election is not over. What we have now is a likely projection. There are even meme's going around telling people to stop telling others to be calm. The thing is nothing bad has happened yet except some radical Trump supporters have attacked people because they are either gay or of a non Caucasian descent. This last is what we should be standing up against.

I know plenty of people personally, who are entertaining the idea, and that's the really scary part. The fact that it's an idea at all is frightening. So, don't tell me not to label people, I know what I see and what I hear, thanks. And, maybe if people here stopped acting like spoiled children, I wouldn't call them such.

It feels normal again. We can talk and text just like we used to in the very beginning. He's not all that open, but I know that, and I don't expect much from it. It's merely the fact that he's trying, that's what means the most to me. He's putting forth the effort. I love that boy, immensely, and I'll do everything within my power to keep him in my life. Even if it's just this capacity for now. Because, I wholeheartedly believe, that once both of our situations get right on track, we can have a real, solid try at this relationship thing. And, I think we can make it actually work. So, I'm happy to wait until the timing is right.

Glad things have improved for you, my dear.

Ah, a gem from the Acolyte page. It totally made logging in worth it.

Question: Are vampires real? How does one become a vampire if he/she wants to be one?

Seriously, kids, vampires don't exist. Anyone who claims to be one is lying or otherwise delusional. They came about because humans didn't understand and couldn't explain much of anything in the early days which is how myths tend to start. You're not going to find your Lestat, Bill, or Edward Cullen. Learn to differentiate between reality and fantasy.

I bought the remastered Skyrim. I'm so happy! I LOVED Skyrim on the 360, but my disk got corrupted and I wasn't able to play it much. So, having it on the Xbox One is awesome. I get all the DLCs and the mods. I'm going to have so much fun with the mods. It just needs to hurry up and download already.

The mods make the game so much more fun, especially when you've beaten the game's main quest line several times, haha. I am kind of avoiding certain mods though, because playing OP isn't that much fun. Some of the spell mods are just a little ridiculous.