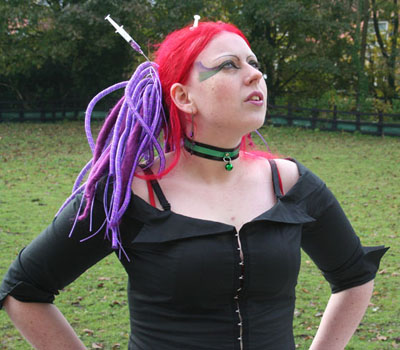 At the moment my portfolio only contains random pictures of me. Soon I hope to update it with some of my own photography.

Update: April 9th 2008: Due to the latest loss of pictures, my portfolio has been absent. I can't remember where those pictures were so I'm putting new ones up. These are of me as a nurse and are now about four hours old.

Update: May 7th 2008: I'll be uploading pictures from last weeks photoshoots over the next few days. In the meantime, there are some in my journal.

Update: July 5th 2008: I still have to upload more pictures from my Whitby shoots but I've made a section in my journal for shots of me. It's entitled Eye Candy. Feel free to take a look and please do comment.

Update: December 18th 2008: I've just uploaded some pictures from last week's multi-storey car park photoshoot. They're actually in this portfolio rather than in my journal.

Update: February 5th 2009: Uploaded some old shots of me and some more recent ones from nights out, including a couple with Damien.