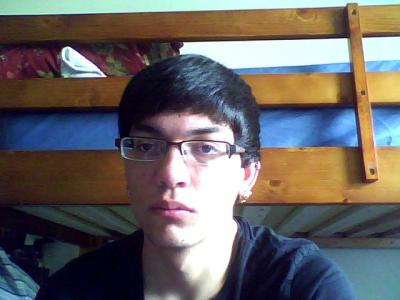 "All life is an experiment. The more experiments you make the better." - Ralph Waldo Emerson

View my journal if you haven't already, tell me what you think.

I could tell you everything I can think of about myself; unfortunately that turns out to be quite a lot so I'll tell you a few things I think are what make up me. You'll also find pictures intermingled in with my writing.
I'm going to start off by saying that my name is Jacob Lujan. I'm 19 and I'm currently enrolled in Portland State University as a music performance major. I don't know if that's going to be my career. I'm young and I know I have talent in multiple areas.

Right now I want my career to be in music. Since I've mentioned music it can be assumed that I play some sort of instrument. I play drums, trombone, euphonium, and baritone. I've been told that being a multiple instrumentalist means that I can be a band teacher. I've looked into that and I'm not sure that's what's right for me. I'm interested in music composition at the moment. My main dream concerning music would be to play in a band and make it big. While unrealistic it would be really nice to do. I listen to any genre of music. To me music is simply that, music. It is universal. It belongs to no one group. I can listen to pop/country in Taylor Swift while at the same time I will go Classic Rock with Led Zeppelin. Music is Music is Music is Music.

(This video is of me playing drums. The video quality is bad and the song has changed slightly, mostly me. If you want to hear the latest version you can check out the myspace link at the top of the page)

Another career choice that as of late has opened itself up to me is as a writer. I've learned through these past two years that I have talent in that area. I know that writing is a hard field to break into, as is music, but I'd like to think that with hard work it is achievable.

I'd like to think that I'm older than my age suggests. I know I don't think like a lot of people that are in my generation and around my age. I don't know a lot about the world. I'm not wise or old, but I think. I could be a philosopher with all the thinking that I do. While yes I am young I believe I am on the right path as far as development goes. When one lives a hard life one grows up far more quickly. I have a strong attraction to those who think. To those who have intelligence. I'm not going to be mean to those who aren't as smart, but at the same time I'm not going to be able to connect with you nearly as much.


A lot of people who know me think that I'm not smart, think that I'm addled brained and a druggie. These people do not know who I am, what I stand for, etc.
I've found that of late the world is lacking. It is lacking a decency, it is lacking respect. Many people no longer care for their fellow man/woman. I can tell you that I am not one of those people. I try my hardest each day to make a positive impact on someone I know. I try to help people and while that may not always work out I'm satisfied that I tried.

(These along with the one previously shown have to do with OC. OC stands for The Oregon Crusaders, a drum corps, based out of Portland, Oregon. I participated in it last year and the memories gained will last me a life time. I plan on participating again until I age out at 21).


I really like to read. Reading is something that brings out your intelligence. I believe that it helps to make you smarter and that your imagination will be infinitely increased. I read a lot of Fantasy though I also read autobiographies, biographies, the whole gambit.

I have an insatiable appetite for knowledge. I like to know everything about everything. I'll ask question after question about the tiniest details. I also find that when I have a clean space where the tiniest details are taken care of that I think more clearly. I believe that this is part of my moderate OCD. Some label OCD as bad I believe that it's only bad if you let it become that way.

If you have any questions or would like to chat with me please message me. I like to talk to people and I'd really like to re embrace this site. I feel that I've fallen out of discord with VR and I'd like to reconnect. I'd ask you not to message me asking to cyber. Doing so will get you no where. Also you'll notice that I've turned biting off. I appreciate the gesture it represents but please use a variation of the old standby, hi. I'll talk to anyone I don't have prejudice but don't expect a serious relationship other than my sincere friendship. I've gone down that road before on the internet and it's not worth it. So message me, ask me some questions. I'd appreciate it.

Words ending with the suffix "ent"