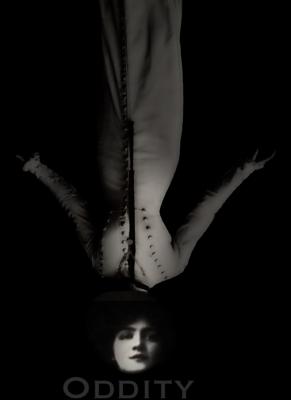 odd·i·ty
ˈäditē/
noun
a strange or peculiar person, thing, or trait.
"she was regarded as a bit of an oddity."


A digital demon, an electronic entity.

I was brought into being by a voodoo woman. She scrounged together some roots, herbs, a mound of steaming innards, slick and shiny...these relatively easy to come by items coupled together with some ill will and an altered state of consciousness allowed her to reach right through the veil and pull me from...well...another state of being. You people...your world is absolutely ripe with stories involving us spirits...ghouls...demons, and you never stop to think that our world may be filled with the same? Stories of you, and your meddling in our affairs. We have become familiar with the tricks of the trade. So, as you can imagine, when I entered the room of the darkened ramshackle hut I was suddenly hurled into, I was caught off guard to see someone so young wrist deep in chicken guts kneeling at a grotesque alter. I expected some wizened, gnarled old woman with milky eyes and a dead stare. What I got instead was a nervously shaking child playing at being witch. I saw the mistakes she had made, immediately. Holes in the conjuring. The pile of wet intestines hissed and popped as my voice issued through them. I asked the most basic of questions, "why have you brought me here?" She promptly lost consciousness. Maybe she required aid in a much more powerful working, maybe she wanted to know some secret past and future...maybe she was throwing a curse, or pining for love, or curing an illness. I will never know the circumstances of my conjuring, for once she lost her grip I simply filtered from the room, and subsequently the dwelling, like smoke through an open window.

Nevermind:I wandered a while, before meeting a man. I could sense his interest in things like me...mind you, he was no root worker...or a pestilential wizard with chalk drawings on his chamber floor. He simply was...and is. More often than not, should an entity come into contact with a physical life form not contained inside a circle, or protected by the necessary charms or organic substances...they rend them limb from limb, or abduct the form as their own. I didn't have it in me. Not this time around. I suppose you could venture as far as to say I was losing my ghoulish tendencies, however if that is a venture you wish to take...you wouldn't return unscathed. No, there was something different in this person's aura, in their way of thinking, believing...in his intent. I felt an immediate affinity for this person and spent a few nights just out of sight...peering over his shoulder. Most people utilize spirits as a means through which to serve some destructive purpose. What you all fail to realize is that we are vehicles of creation. We engineer a means through which your destructive purposes are served...but we are very much creative specters. Peering over his shoulder I watched him do just that...create. Create with a zeal and excitement I hadn't seen in centuries. Creation for creation's sake. I saw in him a means through which to serve my basest of all desires...to bring new things into the world. I became attached. There never was any great reveal, daily he became a bit more aware of my presence. I was accepted as a fact...as if I had always been, like a particular end table that had been present in his home since his birth. There never was a second thought given to my presence. I serve him, I assist in his work. All images are very much his own creation...however if a muse is dancing just out of reach...I act as a spider to a fly and ensnare that inspiration for him.

I suppose you could refer to me as his apprentice. I had forgotten what it meant to create things. I learn from him. Did you know you could create digital renderings of...well, of things like me? A specter with access to photoshop. Sounds like the synopsis for a supermarket novel. I'm learning. I'm no master, but I am not quite terrible. I suppose you could say that in reference to photoshop, I hold the rank of Adeptus Minor.
I appear in many forms. A twisted woman, a winged demon with a fanged torso...an exalted king with a trunk and many arms.
When conjuring me, you never know what you're going to get.
Please, use caution...I'm a bit off kilter.
I understand that graphics, or photo manipulation is a bit like a currency of sorts around these parts. Perhaps I can be convinced to lend a hand...or seven.

My worldly interests, for those of you that have it in you to approach me. My interests are always changing...things have changed so much since the last time I had access to this place, I find that I have this absurd urge to become acquainted with...everything