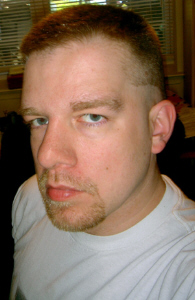 I am best known as Khornesone, married to the lovely and wonderful Silverbow who spends so much time on VR that I have come here to pester her online as well as offline. My step daughter, Wolfbite, is also here on VR.

This is basically a chance to play around with graphics for me, bone up on my HTML and help out my wife. I did both Vampire and Werewolf LARP for many years until the Camarilla organization became too top heavy and the games got boring. I haven't been back to an RPG since, though I do like war games both virtual and model.

I am Active duty Military currently deployed once again-- so I'm just not as active online as I'd like to be.

My greatest love is my wife, my first love is the Incredible Hulk -- since I've been a 90-lb weakling the first half of my life, and prone to temper the other half. The army has helped build me up a bit, but I still read comic books and even collect the occasional Hulk toy. Warhammer, both fantasy and 40K, are two of the war games I enjoy. I've played in lots of online campaigns, and with my wife we even run one called SupernaturArl, which is set in World War II and features mystical creatures changing the war. Think Hellboy on crack. It's fun and simple to play.

So what free time I have between Supernaturarl and work I generally spend with my wife and step children. If you send me messages I may or may not respond, it will certainly take quite a while. No offense is intended, but I think my priorities are fairly straight on that point. I am an extremely busy man and passionately loyal to my wife. Despite her efforts I am defiantly not an extrovert.