Sugar and spice and all things nice...that's what little girls are made of...

"Brian Howe had no mother, so he won’t be missed."

Brian Howe's body was found after a search by police and concerned neighbours. Three year old Brian had been strangled, his body covered with puncture wounds, his hair had been hacked at, and, worst of all, his penis had been partially skinned. When the authorities later removed the clothing off his body, they found the letter 'M' cut into his stomach. 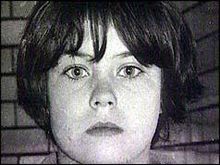 Bell's mother Betty was a prostitute who was often absent from the family home, travelling to Glasgow to work. Independent accounts from family members strongly suggest that Betty had attempted to kill Mary and make her death look accidental more than once during the first few years of her life, and Mary herself says she was subject to repeated sexual abuse, her mother forcing her from the age of four or five to engage in sex acts with men.

Several times during her early childhood, Mary experienced overdoses of medication, once ingesting so many iron tablets that her stomach had to be pumped. There is speculation that her mother may have been inflicting the overdoses on her own child in order to receive attention. By all accounts, Mary's mother can be quoted as saying during the trial, "Jesus was only nailed to the cross, I am being hammered." Her mother was said to be overly dramatic, and, bluntly, whored out her daughter's story to the press during and after the trial.

Bell grew up in Newcastle, in an economically deprived area where domestic violence and criminal behaviour was commonplace. As a result, her previous behaviours, including attacks on other children at school, vandalism, and theft did not attract undue attention. She had also developed a reputation as a showoff and a liar, so her claims of: "I am a murderer", was dismissed as just another one of her idle boasts.


It seems that Mary Bell had been displaying classic symptoms of psychosis, or traits that could eventually lead to psychosis. There is a phenomenon called the 'Homicidal Triad', and includes bed-wetting as an older child, a preoccupation with starting fires, and cruelty to animals. Although there is no evidence of fire-starting with Mary Bell, she was prone to destructiveness in her early years. She was a late bed-wetter, and while incarcerated before her trial told guards that she was terrified of 'messing the bed'. She was also reprimanded often by neighbors, relatives, and strangers for cruelty to animals. 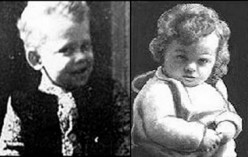 We can only speculate as to how many other children Mary Bell had harmed before she was captured. Given that she lived in an area known for criminal behaviour, many of her other crimes would have gone un-noticed.

Days before she was captured by shocked police for the murder of Martin Brown, a young boy was found outside a pub bleeding from a head wound. Mary Bell, who had asked before, "When you choke someone, do they die?", told adults that the boy had fallen from a ledge. In reality, it was later discovered, she had pushed him.

On May 15th, four days after attempting to kill the young boy, Mary choked two playmates in the playground. Ten days later, she took Martin Brown's life. Eventually, his death was linked with Brian Howe's murder. She was, as far as anyone knows, alone on this occasion. Bell and her friend Norma Bell (no relation) broke into Day Nursery, and scrawled cryptic messages on the wall, allegedly, these were amongst the messages they left:


"I murder so that I may come back. Fuck off, we murder. Watch out, Fanny and Faggot."
[Faggot was allegedly Mary's alias, and Fanny was Norma's]

"We did murder Martin. Fuck off you bastard."

After her capture, Mary passed off the writings as something they did 'for a giggle'.

Mary and her friend are said to have called at young Martin Brown's home after his murder and quizzed his mother "Do you miss him? Do you cry for him?"


An open verdict had originally been recorded for Martin Brown's death as there was no evidence of foul play—although Bell had strangled him, her grip was not hard enough to leave any marks. Eventually, his death was linked with Brian Howe's killing and in August 1968 the two girls were charged with two counts of manslaughter.

On 17 December 1968, Norma Bell was acquitted but Mary Bell was convicted of manslaughter on the grounds of diminished responsibility. The judge, Mr. Justice Cusack, described her as dangerous and said she posed a "very grave risk to other children". She was sentenced to be detained at Her Majesty's pleasure, effectively an indefinite sentence of imprisonment.


Cries Unheard: Why Children Kill: The Story of Mary Bell.
By Gitta Sereny. (1999) Available on Amazon.

Woah. o__o Now those are some scary little girls.

Some children just aren't as innocent as we'd like to believe. All of us are capable of murder in the heat of the moment but mutilation and murder is almost unbelieveable when it's committed by a child.

And I read she now has a child of her own... how is that possible? How could they let her have her own?
Ugh.

She was eventually put into an open prison - I think she may have been in her twenties -(inmates are granted a certain amount of freedom when they are deemed to be 'rehabilitated'), and she escaped, getting herself pregnant during that time.

As far as I know, she is now freed and granted 100% anonymity by the highest court in the land, whereby the media are forbidden to report anything at all about her, her daughter or her whereabouts. That, to me, makes a mockery of the whole system and could well leave her free to commit more crimes against children - who is to say she is truly a reformed character?

Because escaping inmates are fully rehabilitated. :|
I read more about her, and thought the same thing. It reminds me of pedophiles and the way they're given a new name/moved around and given protection. Yes... a danger to children deserves a new mask.

Great comments you two. I always love re-visiting your pages, Sulks. It's just, disturbing that people can get away with so much...

I'd love to change the world, but I don't know what to do