Anyone read anything good lately?

Mr. Norrell and Mr. Strange was on sale for Kindle so I bought it. I really wish I'd read this earlier now, if you have any kind of love for English Classics and that 18th/19th-century writing style combined with fantasy you will absolutely love it. It's definitely not an action type book but I really love the description of the magical study and it rings true for the general approaches scholarship took in that time period. I'm more than halfway through and kind of feel that I'm just getting to a more traditional fantasy plot taking off (rather than the more abstract 'return of magic as a part of British society and governance' plot). Heartily recommend.

Nothing completely. The reading bug comes and goes and I haven't had it in a while. Other hobbies I enjoy moved up to the top of the list so I'm sure reading novels will make its way to the top again at some point. I really do enjoy a good book.

I read a lot so decided to make this section in my journal to share about books I have read.

Two new hardcover entries in the "Harry Dresden" series of books. Set in modern Chicago, but a modern world where magic and the supernatural coexist with technology. The supernatural world is just under the surface, and only a few "normal" people ever get more than a small taste of how odd the world can be.

Harry Dresden is a wizard and PI, the only one listed in the phone book. The style is noir, with a tip of the hat to De Lint (Newford books) and Glen Cook (Garret series). Harry is perpetually poor, and always getting himself in over his head. The White Council of wizards and their allies are at war with the vampires (Red Court), mostly due to Harry, and this goes on in the background. And the war is not going well.

Overall, another two solid entries in the series. Harry is dealing with relationship issues, mostly a growing attraction to sometimes partner Murphy, and dealing with the temptation provided by his connection to a demon. Michael Carpenter and his family make a reappearance, as well as politics in the supernatural world.

Noir PI vampire, modern NYC. Interesting and very well written. Politics and intrigue, punk and hippies. Vampires don't have fangs, more often mugging and using works to extract a few quarts of blood. Or cozy up to one of the big factions.

The Nymphos of Rocky Flats its a decent little book about Vampires and detectives and even some EBEs. I enjoyed reading it. It went by very fast, and the ending felt a tad rushed, but all in all a decent read. Specially if you like the Dresden Files type of stuff.

Tim Powers Three Days to Never. Very good book. Speculative fiction set in the late '80s, focusing on Einstein's secret family and research in time travel. The family gets involved with the paranormal agents of the Mossad and a private paranormal/spy organization that may have had connections to Nazi Germany at one point.

The Great Turning by David Korten
The culture battle of Empire (domination) vs. Earth Community (partnership), by the author of When Corporations Rule The World... ...best book I've read this year...

Licensed to Kill by Robert Young Pelton
The author of Dangerous Places with a firsthand look at PMC outfits, from Blackwater to even shadier types. Non-partisan, you can tell that the author bonded with PMC pals, but it's an engrossing look into this phenomenon that's so pervasive now... ...you won't be able to put it down.

The Prince of Marshes by Rory Stewart
30-year-old Brit dude shows up in Iraq and nabs a provincial governor slot. Non-partisan read, just a log of Rory's personal dealings and brokering between the Iraqi tribes and coalition masters -- but very indicting of the post-occupation fiasco nevertheless.

Talking Right by Geoffrey Nunberg
Been a rash of books by linguists on past decades right-wing dominance of media persuasiveness and right-wing media bias including "framing" poster boy George Lakoff ("Whose Freedom"), but Nunberg's book is the superior offering, and he lays out the truth.

The Politics of Jesus by Obery Hendricks
A leftist framing of the gospel message, and a scathing indictment of Republican politics and conservative indifference to economic injustice and political deceit. A call for social justice.

The Singularity is Near by Ray Kurzweil
GNR (Genetics, Nanotech, Robotics) revolution will bring immortality to humans, ability to upload/download ourselves and Kurzweil believes it may come sooner than even many of the rosy-eyed of optimists can conceive, 20-30 years, and he's doing everything in his power to stay alive until then. A lengthy intro chapter charts our current tech progress and how it's not linear, but exponential, whether we're talking about chip speed, memory, cell phone proliferation, etc... Kurzweil is a utopian but all should read this and ponder cultural and political waves that will be wrought as we wrestle with implications of hyper advancing tech.

The Nymphos of Rocky Flats....Glad you enjoyed that one. It's been a while since I've read it, but I remember enjoying too. 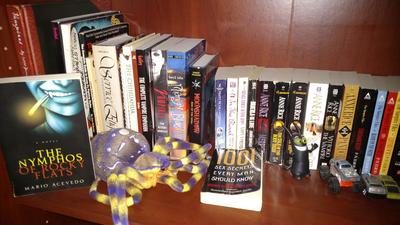 It's a book I would read again a year from now.