A lot of planning goes into a rpg game. Right now I'm running, Harry Potter and Star Wars on a regular basis. Deadlands is for holidays. We may bring back Vampires at a later day since we all miss it. I have decided to make my member page for dm notes because even the best laid plans get screwed up. It's like reading a make your own adventure book. With players, you never what they will do. 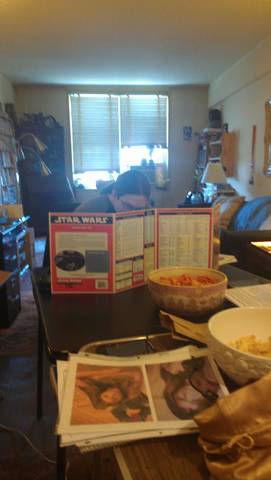 Plotting and planning, that's why I'm the "evil" gm. 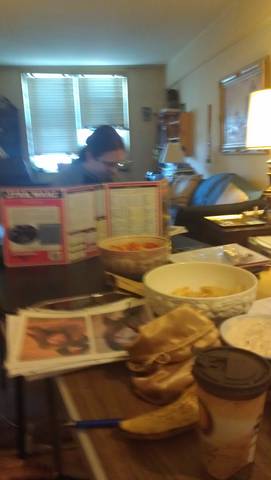 You never know with players how it's going to pan out. For example my Ocean's 11 plot in the Star Wars game got screwed up because Dave was a no show and so was Jeannette. Jeannette was important to the story line for her computer skills. Dave didn't want to play the Ocean's 11 theme since it had been done in a previous story. So they story had to been with 3 characters. It took longer but thanks to Ret's diversions, it worked.

Same with new Jedis, jeannette didn't want to start a new character. Steve has been sick, so it was a small game. Now Dave wants to introduce chance die to influence weather, creatures and such. Good idea but it can change the game.

At least with Rob out the picture there is no drama. Roe says it he comes back, she's gone. You know the wife comes first. Besides ater the wedding and the mess he made of it, I don't miss him.

We never got to the Chamber of Secrets or the Opera House as planned in game plan due to Jeannette analyzing things too much. It seemed that when Roe and mom came up with a plan to confront Prof. Harker, Jeannette and Shirley didn't like it. Roe laid down on the couch, I walked Woody and Lib was confused. When I came back from Woody walk they still couldn't make up their minds. Then they didn't want to hear about Ruby's encounter with centaurs which I thought was very cool storyline. Oh well, Ruby will do it alone then.

Best part of game was when Ruby and Marcelle got spells cast on them. Lib/Marcelle had jelly arms and Ruby couldn't get off the floor. Ten points off for Gryfindore.


After the newbie Jedi storyline is finished, I'm considering going back to Vampires in the rotation. Shirley may be joining us. Just have to review the rule book because it's been a while.

Although the next game coming up is the newbie Jedis, I've begun planning on the vampire game. We may have one around Oct. 27th for Halloween to get into holiday mood.

Another cool idea to consider is that Dave found these interesting triangle books. Everyone could find a book and it has to be pieced together to read it like a map. Interesting! Perhaps for Harry Potter.

Cool note- Dave found Deadlands dice with guns and all for Deadlands game. We all can't wait to play with them. Of course we all ordered them. Roe stockpiled on them . She bought all of them on ebay. Mike will be soooo pissed.

HP game- Shirley originally wanted to play a centaur in the Potter game. I had said that was difficult as a player character. As it turns out mom's storyline involves centaurs so Shirley might be playing a centaur after all. It would be interesting to have one as a student in the school.


Oh and by the way I made a point system for school like in movie. 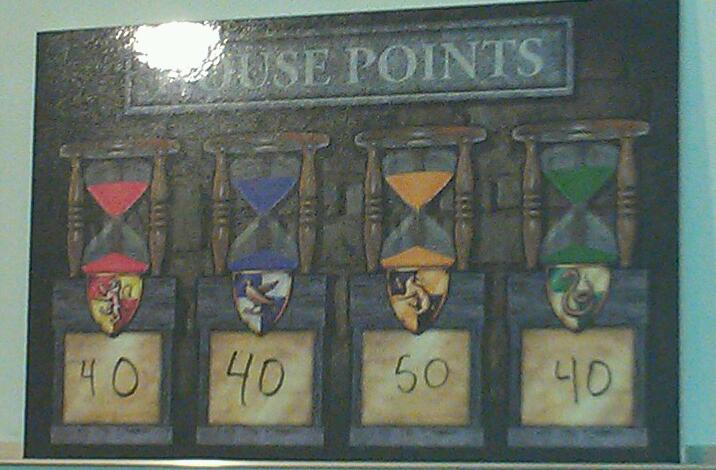 I have given so many clues to my players and no one gets them. They have been finally sending emails to each other to see what they missed in game. Ah sweet, I got them now. Plotting and planning , mom, you had better watch out for your pets in game.

I had to use Arrietty and Alestra , Roe and mom's second character to help them out. They found more clues. I actually enjoyed playing with these 2 new characters. Alestra can see into the future and Arrietty is a half goblin.

Malfoy is back, of course, ready for revenge.

Meanwhile Vampires started back. Dave may join again. Julian has been away from game supposely buying and investing in the ship building industry, the ones that built the Titanic. Should be getting interesting. Then Shirley is joining as a crazy Makaviniun vampire.

In the Potter game , a little too much planning on spells. Had to step in and get to the action. Love the whole idea of the giant wedding coming up soon. Mom was awesome planning the wedding for Hagrid's brother. Using Brianne from Game of Thrones as the bride to be , Gawp's girl. Mom suggested her. Awesome idea. It will be in the woods since Gawp is about 25 feet. A small giant!

A good couple of games-
I introduced Mom's idea about Buddy and Mr. Hyde. Time is perfect for Ripper story that I started. Not sure yet if Buddy will be the Ripper or just a puppet. I have Nicolletta more in character talking to goats.

And in the Potter games, Myles has joined as the son of villain Carrow. His character is a new student. Adjustments will have to be made. Considering the family history, do we trust him?

Next few weeks, wall to wall games and there is always cake. This was a Bulgarian scorpion cake made by Shirley because her character Kirel is Bulgarian.

Harry Potter game went well. Although the group saved a aura, they still got detention. The giant wedding is coming soon.

Buddy has been "helping" a certain doctor in the lab. Who knows whether the doctor has been secretly experimenting on Buddy. Buddy has been having some mood swings at the Mission. Andrea is going to check it out. There have been some murders in the White Chapel district. She hopes Buddy is not involved. Only the evil DM knows for sure.

Taking a break from vampires till Halloween. Next game is Harry Potter. The giants will be in town, or the mountains, for the wedding coming soon. Madame Maxine plans to bake the giant cake with Ruby's help.

Next game in rotation with HP will be Star Wars with vets and newbs like Faceoff, hehe.


We are back to vampires for 2 months. Roe will be skypping because of the surgery but still have evil things planned for her. And the Ripper/ Buddy stuff will be happening as well. A few people would like to kill Buddy anyway and why would Julian add fuel to the fire by giving a crazy guy a gun and making him a deputy.

It's Halloween in the Potter game. The ghosts in the Hall are throwing a party. Then the giant wedding is coming. They've arrived in town and shaking things up.

Had to cancel the games because of the bad weather. Everyone is waiting anxiously for the giant wedding. There is trouble in paradise. Gronga didn't get the permission of her tribe to marry Gawpt. The giants are ready to rumble. Then in vampires, Andrea is up to her head in chains. Who's going to save her? Her men or Henry, the wolf? Where's Julian in all this? Stop buying property and come back to save your girl. You know want her. You tried to get Vincent killed to have her. 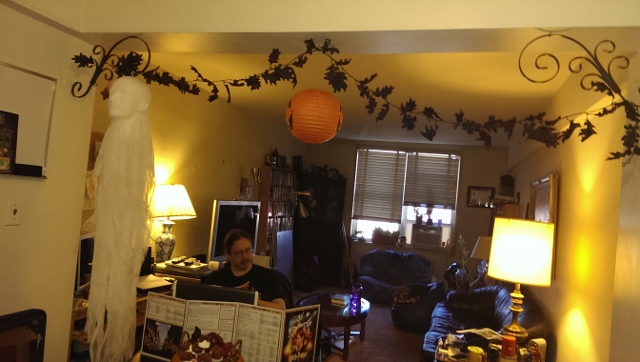 May not be a wedding. Next chapter is the runaway groom. 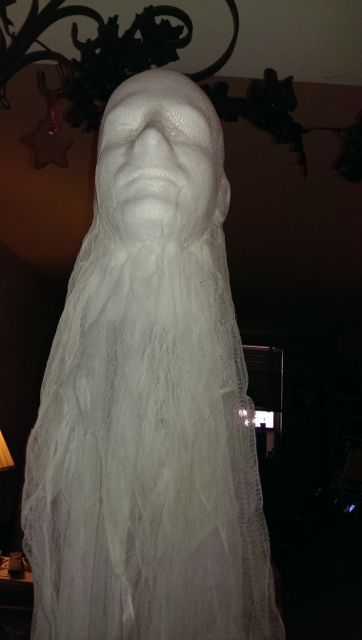 Finished up the vampire storyline. Mom saved Buddy. The Doctor turned into Hyde and got away. Minder was upset over this, that the Hyde creature was too much for her. She had never lost a fight. Everyone loved mom's Jekyll story.

Next, on to Star Wars.

Finally made it to the giant wedding in Harry Potter. Recovered the runaway groom. Made peace with the giants. Poor Ruby is all dressed like a girl for the Big Event. 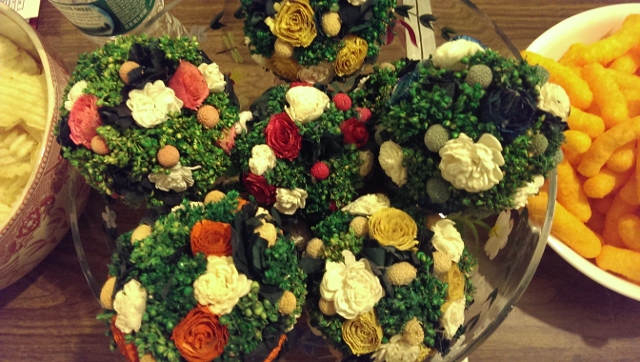 cool job Matt, do I get points for that and get to live?

Be nice to the wife. I know where you sleep!

Thanks for that evil gm. A reminder that Griffendor is on the bottom. We were innocent victims

Are you marketing this game?

Hurry up and finish

You played Deadlands without me. Traiters

I hope you can market this soon

Is it Deadlands for Easter? Mike will be so happy. What does evil gm have planned?

We need zombies in the game!

I saw a show that said giants smell like apple pie. Use that in the game!

Next game takes place (in game) on Halloween at the ghost's dead party.