Can you smell the cheese?

The name gives much to the imagination. I chose the name for 2 reasons.Hubby's bf calls me that. He never looks at my face, hehe. Second, the hubby is Smell the Cheese on Twitter. Well, he is the cheese to my nips. I am actually hooked on cheese nips since I was a teeny nip.

Happy to be a member of House Umbrae Octo

Now for some friends of nips-

The hubster has been Smell the Cheese for several years. I was once referred to as Mrs. Cheese. I prefer nips.

Artistic yes, edible maybe 50/50 on that. You have to take your chances. However, it will look pretty.

Besides cheese, I do love chocolate but I really love the salt. I must be a salt vampire from the original Star Trek show.

That's one cheese thing I hate. Those cheese logs taste like cat food!

1. strawberry milk
2. anything with raisins
3. fruit cake
4. fish with bones
5. pancakes with syrup

I am also known as rlugo718 with another profile. My Smell the Cheese hubby is the resident mule on VR, VanDick. He does reviews on cheesey movies and games on Twitter. I am his sidekick on his cheesey adventures.

I teach Kindergarten and IrvingthePig is my boy. I was a single mom and raised him alone till I met that wonderful barnyard animal, VanDick, when my son was a teen. I actually met him through my son. He was mentoring him in art and introduced him to role playing. I joined the group and the rest is history. That's how I met all of my dear friends that are all here. We rpg together, go to cons, play online mmo's and all love the same strange things.

with the cheese! Been watching cheesey movies since about age 4. While most girls were playing princess, I wanted to slay the 50 foot woman. How perfect it is that my guy likes the same things. He always was a critic. He started doing reviews on Twitter. People appreciated his honesty and humor. As I mentioned I became Mrs. Cheese.

I do like the cheese besides the nips. I found cheese could be used on almost anything to improve the flavor. Suzie Homemaker, I'm not.

When I'm not listening to Steve and Greg or Raffi at school, I like to listen to-

Bet you didn't know that-

Cheese is an ancient food whose origins predate recorded history. There is no conclusive evidence indicating where cheesemaking originated, either in Europe, Central Asia or the Middle East, but the practice had spread within Europe prior to Roman times and, according to Pliny the Elder, had become a sophisticated enterprise by the time the Roman Empire came into being.

Proposed dates for the origin of cheesemaking range from around 8000 BCE (when sheep were first domesticated) to around 3000 BCE. The first cheese may have been made by people in the Middle East or by nomadic Turkic tribes in Central Asia.

Who loves the cheese?

Who wants candy? Mummy, can I have my cheese?

I moved into my new place
Strange, there were toys on the floor
A bed by the door.

Did the last tenant forget something?
No water dish
Or food at all
But there was a big red ball.

My new found friend must be hiding.
Then the ball came back!
I felt something on my lap
I think I may have a new friend
Maybe I’ll call him RIP, my little ghost dog.

Some might be a bit freaked by his ghostly presence
Not me
He just needs to be loved, like me. 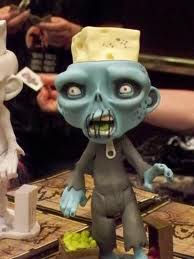