Let's play a game, shall we?

Tell me how we "met" and something you remember about the first time we "met".
Was it the forums?
A House/Coven?
The vampbox?

I saw cleavage and the rest is history.

Actually.... it was when you came back this time. I just up and decided to message you and here we are. :)

hello nice to meet you ;p

Do not message me that you have rated and added me.
I can see that you have.
As can any premium member.
If you bothered to read the profile, you'd see I do not care.

And these homemade fucking bites?
I have biting turned off for a reason- doesn't mean send me one because you can't bite me through the applications set up here.
It's just another block.

And because *I* personally do not care about rating (never really did, come to think about it) I will rate everyone who sends these messages a 1 then block them.

Maybe even dishonor you. Hm?

Ha. Checked back here just in time. Lol. Also.. I have rated this journal entry as hilarious. >; p 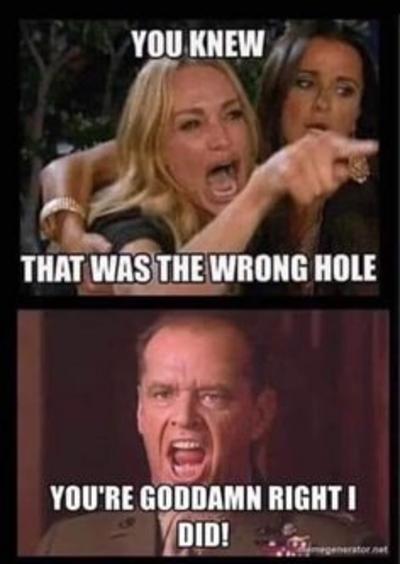 I thought it said, 'Good morning'.

LMAO! I agree... I have the biting turned off as well.. it's annoying. Luckily I have not encountered a home made bite! I would approach it the same way you do!

but that's not fair!, don't you know that this is there 37th profile, that they just renamed for the 102nd time, so they need adds to get out of "the red" and if you don't rate them 10 they will rate you 1 with all 36 of their lifetime sire accounts.... *eye roll*

LMFAO! Never a more sad but true statement has been made TNG.

I've been gone for a while. Life happens and all that shit.
But, being that as it may, I am absolutely floored at how- years have passed- and some of you are still on that same bullshit you were on two, three, four, and fuck- ten years ago.

I just cannot grasp the mentality you have to have in order to be the whiny, trouble making assholes that some of you are- that some of you have been, and continue to be over a decade later. Some of you bitch and cry about so and so being mean to you, do the same shit back (or sometimes even worse) then have the balls to cry and scream about it like you're some kind of victim in the scheme of things.

And what's fucking hysterical is I swear it's the same bullshit, year after year, but with new players. THE SAME BULLSHIT.
Ain't nothing y'all doing that hasn't been done before. It's like watching a bunch of high schoolers, because, let's be honest- some of you fucking act like it- bitch about the pettiest, stupidest shit every year. I graduated in 2006- even the kids I graduated with have more maturity than some of the grown ass adults over here do, acting like goddamn fools.

And then the fantasy worlds some of you live in. Goodness... I could write horror, drama, and suspense novels based off of some of the shit y'all make up. The lies, the deceit, the crap some of you come up with? Fucking hell, man. It has to take a very demented or mentally unstable mind for some of the shit I read and see.

This is why I stick to very few people. This is why- outside of my journal and a few journals I comment on- I stick to the Database. To the House I am in. To the limited people I know.

Y'all do this shit to yourselves.

And boo-hoo. If you feel offended, well guess you fall into the cesspool category, don'tcha?

Freaking classic and true. Buahaha. It's not new people either... Its just new names!!! Haha

It's so true! It's the same shit but a new day, but on a perpetual loop of never ending insanity.

All done for now.

Cause I ain't doing much else with it for a bit.


Well, unless I shave my head. ha

About to clear my portfolio and redo that thing.

Out with the old, keep what's important, keep everything else. :)

Haha I seem to have missed a lot.
I mean, same games, same stories, just semi new players.
Y'all will beat a dead horse until it's bones are ground to dust and then snort that shit and try and go for the next despaired horse within your sights to beat and snort, eh?

In the words of Snape. "Always"

I clicked it and was so lost for a moment, because I had not seen that update!
Neat-o! :)

If you need any help playing catch up, shoot me a message. :)

Playing catch up on all the new features and seeing what Cancer's implemented is pretty awesome.
Definitely finding it easier to navigate the site now. Took me forever last night to even remember just basic color scheme coding, but it's like riding a bike- I'll get the hang of it again. Life's been a fucking roller coaster the last several years and I am really excited that things are slowly plopping into a sense of normalcy again where I'm not being split between four or five directions while trying not to have a mental break down from it all.

Revamping stuff is always fun.
Going to work on the House of Lunazure this weekend. Update the pages, induct some people (time for hunting! ah hah!), and start some contests for the House members.

Gonna be weird for a little bit as I get the hang of everything again (I cannot believe my absence has been so long!) but eh, I'm a quick study! heh

Holy shit, has it really been that long? 7 years?