Ouija Board... Is it Really Evil? 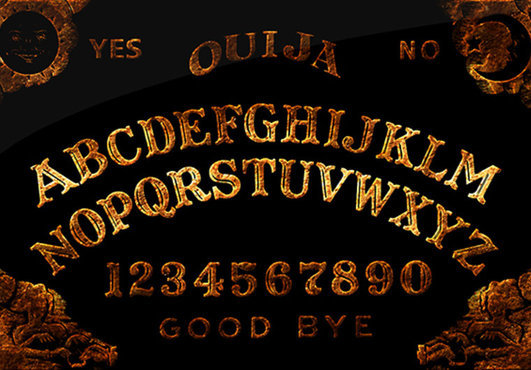 MENTION THE USE of a Ouija board to a paranormal research group these days and you’ll get a lot of head shaking and statements about “opening portals” and “demonic entities”. Mention it to religious fundamentalists and you’ll practically see them shudder and back away on shaky legs, as if the board was created by Satan himself as a means of enslaving human souls.

How did the Ouija board and similar “talking boards” get this reputation? Is it deserved? How is it different than other methods of spirit communication

The talking board has been around for well over 100 years. Its most popular incarnation today is the Ouija board, marketed by Hasbro. There have been many editions over the years and several imitators, but the concept is always the same: a board on which are printed letters and numbers; a planchette or pointer that spells out answers to questions when the users place their fingertips on it.

Marketed as a toy, the Ouija has been a best-seller for decades. When I was a kid, it was seen as a harmless, if mysterious and somewhat spooky diversion. It was especially used around the Halloween season when thoughts turn to ghosts and the unknown. We never took it very seriously, however. If it did spell out answers, each user suspected the other of making the pointer do it... or maybe – just maybe – it was moved by g-g-g-ghosts! But we never had the notion that it was controlled by demons.

This seems to be a relatively new idea. Where did this literal demonization of the Ouija board come from? I can’t say with 100 percent certainty, but I think this idea came from (or at least was popularized by) The Exorcist, both the book and the movie. In this work of fiction, pre-teen Regan tells her mother she’s been using the Ouija board by herself, conversing with someone named Captain Howdy. Shortly thereafter, she becomes possessed by the Devil.

Subsequent movies such as Witchboard, The Craft, and others further promoted the idea that the Ouija was a conduit to dark forces. Previous to these Hollywood productions, the Ouija was not generally regarded in this way. But the idea was also latched onto by many Christian fundamentalists, who tend to consider just about anything they don’t agree with as the work of Satan.

Then many paranormal researchers also came around to this way of thinking, but I've never come across any convincing evidence that would lead to this position. Yes, we’ve all heard the horror stories from people who claim to have serious negative experiences with the board. (In fact, you can read some of them in this site’s Tales of the Ouija section. Hey, a good story is a good story.) But how many of them can be verified? And how many of the tales are the products of active, highly suggestive, and eager-for-drama teenage imaginations? Yet the majority of paranormal investigators today will advise you not to use a Ouija board, taking the same stance as books such as Stoker Hunt’s Ouija: The Most Dangerous Game.

DEMONS OR THE SUBCONSCIOUS?

For the sake of argument, however, let’s say that at least some of these tales of terror are true. Some of them might be. Should we blame the board? Or should we blame the people using the board? In other words, where is this negativity really coming from? Is it coming from a demon, who I guess we have to assume is sitting around with nothing better to do, waiting for teenagers to sit down at a Ouija board to scare the crap out of them with a selection of supernatural antics? Or is it more likely that any effects – supernatural or not – arise out of the energized subconscious of the users?

If you read related articles of mine on this subject, you’ll know that I do not buy in to the notions of demons and possession. These are ancient superstitions – completely made up – for which there is no reasonable evidence. The idea of the Devil was created by humans to help humans explain to ourselves the evil that humans do. The sad truth is, however, that we create our own evil in the world. We’re responsible for it, not some discarnate demon. We create it, just as we create good in the world.

And what of the supernatural aspects? Just as it is now commonly accepted among most paranormal researchers that poltergeist activity – objects moved telekinetically, bangs on walls, and the rest of it – is created by the subconscious of a person or persons, so too can any extraordinary manifestations in a Ouija session be credited to the subconscious. Why is it often so negative? Because that is often the expectation of the users involved. Intention creates reality.

We cannot blame the Ouija board. In fact, if you press the paranormal researcher who warns against evils of the Ouija with the question: How can a device made of pressed cardboard and plastic possibly be evil? They will relent and say, “Well, it’s not really the board itself, it’s the people and the act of using it....”

Exactly. It’s not the board, it’s not a hoard of demons lying in wait... it’s the energy of the people involved.

And back to those tales of the Ouija for a moment. The stories about good and positive experiences with the board are not as widely publicized. (People want to read scary Ouija stories.) Many people have actually received useful information from the board. On one of the rare occasions that I have used a Ouija (although I have several in my house – without any ill effects, I might add), I asked it for some lottery numbers. I tried those numbers, and although I did not win the jackpot, I did win $40 – the most I’ve ever won with a lottery ticket. I hasten to add here that I tried getting more winning numbers from the Ouija without any success. So was my one win due to the Ouija or just a coincidence?


Now let’s return to the Ouija as it relates to ghost hunting, which is how I originally began to think about this article.

Can the “mystifying oracle” really be used to communicate with ghosts? I don’t know. As I said, I suspect that the board’s effects are most likely generated by the users’ subconscious. But again, for the sake of argument, let’s say that the talking board can communicate with the spirit world, as many spirit mediums of the late 19th and early 20th century believed it could. Why, then, isn’t it used as a tool for possible spirit communication by today’s ghost hunting groups?

We actually answered that question earlier: They’re afraid of it. They’ve been told that the Ouija can open a portal to negative forces – a portal that once open is difficult to close and can lead to dire consequences. If this is so, then I once again have to ask: What makes the Ouija – this thing of cardboard and plastic – so special in this regard?

Why aren’t all the other tools that ghost hunters use to communicate with the spirit world also considered portals? What about dowsing rods? What about those ghost boxes? What about cameras and camcorders? What about all those voice recorders they use to capture EVP? After all, they’re not just spelling out words, they’re capturing actual voices! Why wouldn’t those pesky demons-in-wait also jump at the chance to use those tools as a means of entering our dimension to work their nefarious misdeeds? Do they have a special affinity for the Ouija board? Do they have a contract with Hasbro?

(Suffice it to say, the religious fundamentalist would almost certainly agree that all of those ghost hunting tools are potential portals for Satan!)