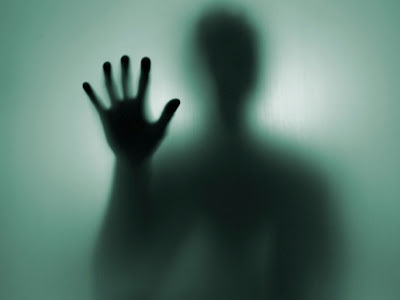 There's a growing interest in the phenomenon of shadow people. What are they? Ghosts? Inter dimensional beings? Time travelers? Something else?

"WHAT WAS THAT?" You were sitting comfortably on your sofa reading the latest issue of FATE in the dim light when movement across the room caught your attention. It seemed dark and shadowy, but there was nothing there. You returned to your reading - and a moment later there it was again. You looked up quickly this time and saw the fleeting but distinctly human shape of the shadow pass quickly over the far wall... and disappear.

What was that? Some natural shadow? Your heightened imagination? A ghost? Or was it something that seems to be a spreading phenomenon - apparitions that are coming to be known as "shadow people" or "shadow beings." Perhaps this is an old phenomenon with a new name that is now being discussed more openly, in part thanks to the Internet. Or maybe it's a phenomenon that, for some reason, is manifesting with greater frequency and intensity now.

Those who are experiencing and studying the shadow people phenomenon say that these entities almost always used to be seen out of the corner of the eye and very briefly. But more and more, people are beginning to see them straight on and for longer periods of time. Some experiencers testify that they have even seen eyes, usually red, on these shadow beings.

The mysterious sightings have become a hot topic of conversion in paranormal chat rooms, message boards and websites, and it is given widespread attention on paranormal talk radio.

What are shadow people and where do they come from? Several theories have been offered.

The explanation we get from skeptics and mainstream science - and who are usually people who have never experienced the shadow people phenomenon - is that it is nothing more than the active human imagination. It's our minds playing tricks on us... our eyes seeing things in a fraction of a second that aren't really there - illusions... real shadows caused by passing auto headlights, or some similar explanation. And without a doubt, these explanations probably can account for some if not many experiences. The human eye and mind are easily fooled. But can they account for all cases?

To call these entities ghosts demands first a definition of what we mean by ghosts. But by almost any definition, shadow people are somewhat different than ghost phenomena. Whereas ghost apparitions are almost always a misty white, vaporish or have a decidedly human form and appearance (very often with discernible "clothing"), shadow beings are much darker and more shadow-like. In general, although the shadow people often do have a human outline or shape, because they are dark, the details of their appearance is lacking. This is in contrast to many ghost sightings in which the witness can describe the ghost's facial features, style of clothing and other details. The one detail most often noted in some shadow being sightings are their glowing red eyes

DEMONS OR OTHER SPIRIT ENTITIES

The dark countenance and malevolent feelings that are often reported in association with these creatures has led some researchers to speculate that they may be demonic in nature. If they are demons, we have to wonder what their purpose or intent is in letting themselves be seen in this manner. Is it merely to frighten?

One interesting idea suggests that shadow people are the shadows or essences of people who are having out-of-body experiences. According to Jerry Gross, an author, lecturer and teacher about astral travel, we all travel out of the body when we are asleep. Perhaps, this theory says, we are seeing the ephemeral astral bodies of these twilight travelers.

People from our own future, another idea states, could have found the means to travel to the past - our time. However they are able to accomplish this incredible feat, perhaps in that state they appear to us merely as passing shadows as they observe the events of our timeline.

Even mainstream science is fairly convinced that there are dimensions other than the three we inhabit. And if these other dimensions exist, who or what (if anything) inhabits them? Some theorists say that these dimensions exist parallel and very close to our own, although invisible to us. And if there are inhabitants in these other dimensions, it is possible that they have found a way to intrude on our dimension and become, at least partially, visible? If so, they could very well appear as shadows. It has long been held by psychics and other sensitives that beings on other planes of existence are of different "vibrations." Science is beginning to look at reality, on a quantum level, in the same way - that particles of the smallest size exist as vibrations. Perhaps, some theorize, the vibrations of our existence are beginning to mesh with those of another dimension, which accounts for the increase in such phenomena as ghosts, shadow people and possibly aliens.

ALIENS
The alien and abduction phenomena are so bizarre that it's no surprise that extraterrestrials are suspects as the shadow people. Abductees have reported in many cases that the alien grays seem to be able to pass through walls and closed windows, and to appear and disappear abruptly, among other otherworldly talents. Perhaps, too, they can go about their alien agenda disguised in the shadows.

There's a good deal of overlapping among the above ideas, of course. Aliens and ghosts could be inter dimensional beings, or aliens could be time travelers - and some believe demons are responsible for all of these disturbing phenomena.

There is no way to prove or disprove any theories about a phenomenon that is so mysterious, that happens so quickly and without warning. Science finds it virtually impossible to catalog or study such phenomena in any methodical way. All we can do, at present, is to document personal experiences and try to piece together what the shadow people phenomenon might be. Perhaps it's an old mystery becoming more recognizable... perhaps it represents a doorway to and from different planes of existence... or perhaps it's just shadows.