I wrote a poem tonight...


I should just destroy it before anyone else in the world notices that these words have been used in these combinations... I might have just offended Merriam, Webster and Roget all at the same time...

Yeah but Dictionary sounds like it has the word dick in it which always made me giggle when I was in second grade.

But that's not important right now.

I loved it. I really did. Maybe it's just more personal, knowing you've written something and what I'm reading has come from your wonderful mind makes it all the more special.


...however, they said it is shipping today and I should have it on time for my flight out Friday morning.


*takes off the OCD Boy cape*

OCD Boy and I am your sidekick, Lazy Mexican.

I will be the ultimate dork I guess... arriving in no costume, and no mask- as I wear glasses that I can't wear under or over a mask.

I was wondering where my cape went...oh wait, mine says Procrastination Girl :p

Last detail involves a trip to the craft store for ribbon.

Go naked! I will dress to match :D

Under the warm blankets

Holding in the dreams

The visions of the night

Fading away with the passing minutes

Replaced by the scent

And softness of a touch

The warmth of skin

Tanned from the golden light

Working days in the sun

The feel of long hair

Belonging to a hardened heart

Holding in the dreams

The desires and yearning

The visions of youth

Feeling younger than my years

Of the wants and desires

Have long ago expired

Are reborn with the sunrise

Casting long shadows across the floor

Begging me to return their greeting

To touch an angel

To live a day

To chase the sun

And capture those dreams

Such a wonder it is

To know in my heart

These old and cracked dreams

Still can reach out

On a mid-spring tree

Flashing silvery in the wind

When the sun bathes them to life

The skin of an angel

Thaws them from their slumber

And they are new again

If only for a day

Or a moment in time

And reach for those dreams again

Could make this mortal life

How the time we are given

And how time destroys

Wearing at our creations

All that we have made

Into the dreams that will

Be reborn and rise again

When the sun light bathes them

And the water flows over them

With the silken strands

To smell their own spring air

The dreams that have been touched

That was inspiring. Very cool. 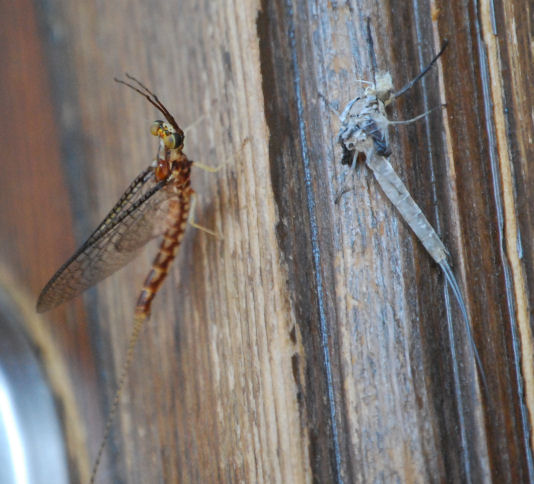 Don't you wish sometimes you can shed your skin... leave everything behind on someone else's door and never look back at it again?

True. Why don't you move to a different part of the country or change jobs???

You can't always leave behind what you change about yourself, but at least you aren't being eaten by a frog.

Frog = corperate america... you certain you aren't a meal?

...aren't we all learning as we go? Do any of us have all of life figured out already? Has any one of us made all the right moves every time?


Has anyone here said feelings are unjustified or need to be bottled up all the time?


If they did, I wasn't listening. Or maybe I chose to ignore them. Those certainly weren't words that crossed my lips.


Regardless, within tomorrow beats the heart of another day. Another opportunity... to make more mistakes.


Funny I got so good at that when all this time I wasn't allowed to make them...

I’m posting this both for the joy of sharing this with my friends, and perhaps a little help from someone who might have more knowledge of these things than I do. 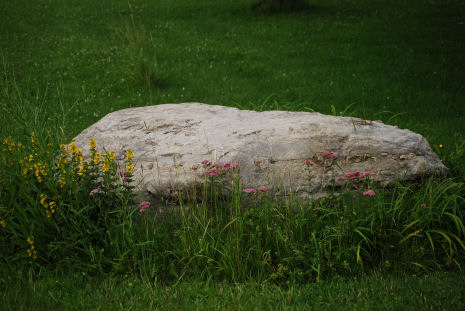 My rock sits at the end of the driveway of the house I grew up in. It’s a rather large rock; probably about 7 feet long, if not more. My grandmother used to landscape it with flowers and sometimes even squash. It’s a landmark of where it sits. The house can be rather hard to find, but if you tell people it’s the driveway next to the big rock, they find it.


The rock, as my grandmother told me, was dug up as part of the excavation of the house foundation. The house was moved around 1956 to make room for the expansion of the interstate through the area, and when the new foundation was dug, this rock was unearthed.


Not being one to simply cast away something that could be so decorative as a big, gray rock, my grandmother had it placed at the top of the driveway.


Some people don’t realize that this area, millions of years ago, was part of an ocean. A lot of sea life fossils can be found here, such as the Penn-Dixie site. And this humble rock that has stood as a landmark on my property for so many years reveals this evidence as well.


Everywhere on the rock there are the remains of life that lived in the distant past. I’m guessing millions of years ago, but I could be wrong. Regardless, to me it is fascinating to study the details… 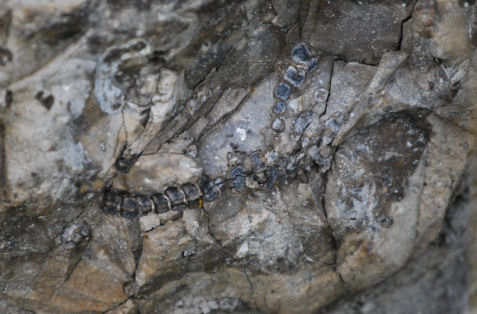 Above is a fossil, of what looks like a multi-segmented animal or coral. 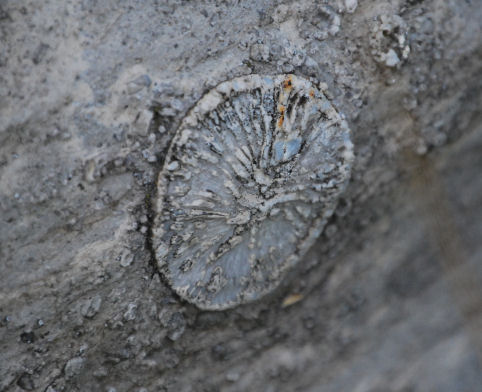 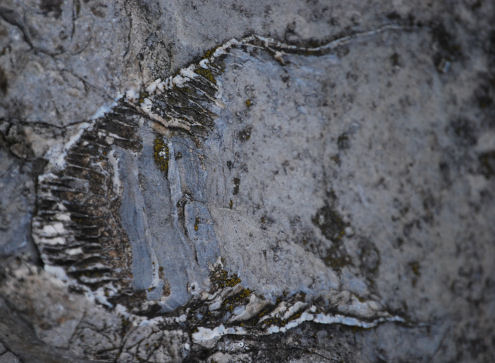 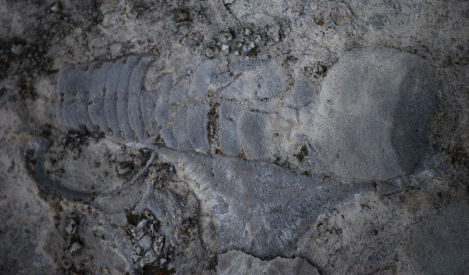 The detail of this one is particularly remarkable to me. This was obviously a crustacean type creature judging by the segmented tail and fins. This is also one of the largest fossils on the rock. 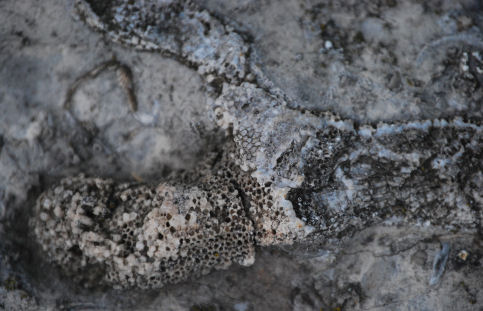 I’m pretty sure this is coral. 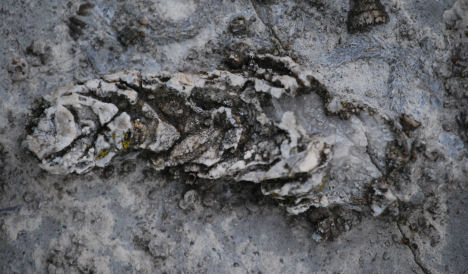 This might be a similar creature to the one previous. This fossil actually sticks out of the rock about a half of an inch in height. Notice the crystallization of minerals where one would assume the head of the creature was. 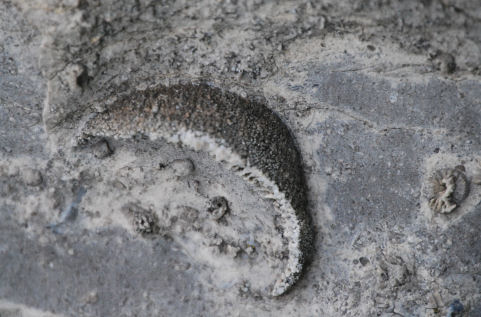 Again, coral of some sort? 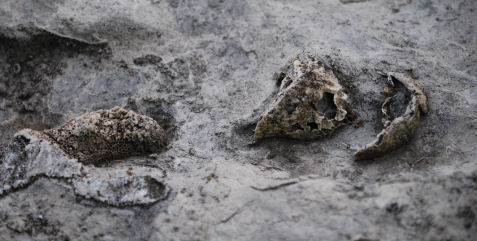 This fossil appears to be the bones of something. There is more coral to the left.


This might not be at all interesting to anyone else, but I think it’s amazing. My children often stand on the rock waiting for their school bus in the morning. We observe the fossils and discuss them. We study the details and use our imaginations to put ourselves in the world these animals lived in...


Study the details and let me know what you see...


My son wants to break open the rock to see if there is a dinosaur inside!

I knew you had a cool rock but I didn't know it was that cool.

I'd love to see what someone thinks these things are. My favorite one is the one with segmented tail and fins. It's craaaaaazy man!

Don't let all the stoners in the neighborhood know you have a rock like this, you'll never get them out of your front lawn..

That is just cool beyond belief!

I hope you don't mind, I saved the images and intend to do some research as to what they may be.

My grandparents had some big rocks at the end of their driveway in N.Y. I wober if there were such things in their rocks? They painted them white, however so I will never know.

Oh man, that is the coolest rock I have EVER seen! I am very jealous. I will have to take a look at fossils later to see if I can help you with identifying, if I can drag myself away from this horrible painting I am doing:) Thanks for sharing:D

Joli, my awesome friend, found this little bit of info for me regarding the larger, multi-segmented fossil:

EURYPTERIDA - Extinct arthropods most closely related to the horseshoe crab, with a prosoma (head and thorax region with appendages) followed by an abdomen (twelve segments and a telson). Not very common, but included here because one genus (Eurypterus) represents the official New York State fossil.

The eurypterids were among the largest and most fearsome marine predators of the Paleozoic. While the smallest were only about 10 centimeters, some reached more than two meters (six feet) in length, making them the largest arthropods that ever lived. They arose in the Ordovician, and the last ones went extinct in the Permian. Most have been found in rocks that were laid down in brackish water or freshwater; the earliest groups may have lived in the sea, and some eurypterids may have spent at least short intervals on land.

Thanks for sharing your rock.

Night at the Drive Inn