The time is 1888. The place is the Whitechapel district of London. My name is Andrea Parker. I run the mission on Mission Street. Here, we provide shelter, food and support during these hard times. My mum was a fellow do-gooder like myself. My father was a wealthy businessman. Mum always wanted to take care of the needy with her wealth. I followed in her footsteps, much to father's dismay.

There were guardians who watched out for the people in this town. The leader of this group was a man named Vinzent Riddick. He was an ophan himself who grew up on the streets, often falling victim to bullies and thieves. Well, no more. He had his own brand of justice.

He noticed Andrea Parker. Her spirit, her kindness and strong will. She would make an excellent addition to his watch group, or clan as some called it.

Things were about to change for the very proper Miss Parker.
Ruled by lust . Hard to control!


After 3 years we have returned to our vampire game.

The big event was the wedding of Michael LaForge, a Toreador, to Camilla Shaw, A Nosferatu. In some circles this is considered a no-no. Micheal has never been one to follow the norms. His artwork was a thing of beauty to him , yet morbid to others.


The big event was held at Meg and Eric's home. All the clans were represented. Caine was the official at the ceremony. A happy occassion for all. Vincent and Marcus were the proud fathers. It was a day to forget about the troubles stirring in London at the time.

The next day was quite another story. While everyone was recovering from the night before, Camilla pounded on Meg's door. When she openned the door, camilla was covered with blood and she was dragging Michael behind her.

Meg and Eric couldn't get anything from Camilla about the events, except that she found him in their place like that. Their place was ransacked. She found Michael like that when she returned from shopping. She needed some last minute things for their honeymoon.

All the officials were called to an emergency meeting at Meg's home. They all donated blood for Michael. Eliza and Anthony set up patrols with their clans. Some Toreador were sent to Michael's to see if any evidence could be found.
Andrea was told to have her Uncle Bobby and the local bobbies be on the look out for anything out of the ordinary.

Things went from bad to worst with the Tremere Inquisidor investigating Tremere activity.


We go all out on these games!

Andrea went on patrol with Rodderick Tombs, newly turned, to show him the ropes. They found a warehouse that looked like a feeding ground for a group of vampires. Definitely not a group that follow Caine's law about feeding on Humans. The place smelled of decay . There were at least over a hundred rotting corses.

Our patrol group needed Julian but being the Ventrue that he is, he was busy aquiring more property in the Americas and Belfast.

Meanwhile, it was noticed that people were missing from hospitals in the White Chapel district. Nicoletta, a vampire who recently arrived from Italy, worked at the mental hospital. It was noticed that patients were being "discharged", then picked up by a wagon to an unknown location. Nicoletta and Andrea will have to team up to find the location. It is very likely these patients are being used for food. They have no family so no one would notice.

Andrea and Nicoletta may have to get Dr. Morphious to assist. He recentlyreturned to London after his heartbreaking rejection from the Condessa. They say time heals all wounds.

It was discovered that Caine's children were in London and probably responsible for the mass feedings. It has been said that the older ones need more to feed. Ziloc was captured and the other 2 escaped but not without losses. All were accounted for except for the Condessa's twin sister of the Ventrue clan.

The Condessa contacted Mindy and Julian to investigate and find her. Uncle Bobby paid a visit to Andrea at the Mission to alert her of the murders of 2 working woman in the White Chapel area. They had been savagely murdered. When Andrea spoke to Lori, she related that she knew one of the victims, Martha. Lori had last seem her about a week before talking about a wedding she attended.

Andrea related all the information back to her Uncle. Any information could help with the case. She let Vincent and Rodderick know when they are patrolling White Chapel.

Meanwhile at the mission, it has been noticed that Buddy is becoming aggressive to the patrons. Lori says he is missing work and has become "smarter". When Andrea tried to question him, he ran out and got into an expensive coach that was waiting outside for him. Andrea noticed a well dressed man in the coach. It took off and Andrea couldn't follow but Andrea made up her mind to follow next time.

Meg has been trying to find herself. Erick took her to an orphanage to consider adoption. Meg overheard 2 men talking about missing children. This reminded her of the stories of missing patients from the hospitals.

Michelle may have found her true calling. She had to get rid of a body(Elizabeth's killing). Michelle chopped it up and put it in the furnace. Elizabeth called her the Butcher. When she returned to her place she found Angelika has removed all the furniture and replaced it with new stuff. All of which was put on Michelle's account. This worried Michelle since she isn't working and that Meg kindly let her stay at one of Meg's places.

Andrea and Minder, along with Nicolletta, Michelle and Vlad with his imaginary "army" went to meet with the wolves. The meeting was with Aidan's clan. Andrea and Mindy remembered last meeting with Aidan ended with bloodshed and the baby being taken away from Bethany. This was not a meeting Andrea was looking forward to.

An ambush was likely. Joshua, the leader met with us , along with Aidan and Henry, who was new to Andrea. We all headed to London to meet at the Prince's house.

Andrea is forming a bond with Henry. A very uncommon bond since the war between their kind. Perhaps she can appreciate her wolf abilities from a werewolf. Vincent may not like this.

Andrea, Minder and Henry have been sent to check out a suspicious warehouse. There are too many of "them" and not enough of "us". Henry goes for help while Andrea and Minder face god knows what at the hands of Caine's children. Will Andrea's bond with Henry and the werewolves bring them closer? Or will Vincent and Anthony's clans find them first? We could use Julian at this time. We always rescue him from dungeons.

So Andrea managed to get away with Henry's help. Seems to be more trouble with Buddy. The doctor has been experimenting on Buddy, stage 2. The doctor is working on a drug with vampire blood to use on humans. It creates a powerful monster. We have to find Buddy before it's too late. They need to study his blood to find the cure. 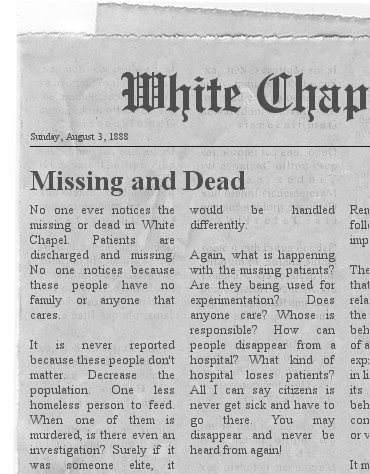 A small group of Andrea, Nikoletta,Michelle, Minder and the Condessa found the Doctor's laboratory. Buddy was with him. It was heavily guarded by vampires. We were outnumbered. We headed back to the Prince's for reinforcements. We were joined by Henry and the werewolves.

We lead the group back to the laboratory and stormed in. Andrea headed to Buddy to contain him. Minder aimed for the Doctor. Nicco went to collect the formula and blood samples.

Buddy resisted so he had to be knocked out. The Doctor turned into a beast like creature and he proved too powerful even against our army of vampires and werewolves. he escaped. We fought off his minions. Minder's pride was hurt because the Doctor was too much even for Minder. Henry helped Andrea escape with Buddy.

All headed back to the Prince's. Buddy would be questioned and hopefully they could help him. We all knew how important Buddy was to Andrea. The Prince promised no harm would come to him.


Months have passed in between games and the storyline. Lacey has noticed Tomas has been spending a lot of time away from her. He hasn't been doing many magic shows. He has also become rather secretive about his comings and goings. Lacey is becoming concerned if Tomas is in trouble or involved with someone else. She is afraid to say anything since the incident with twin brother Derek.


It is Aug. 1888 in Whitechapel and I think the Ripper has made it's first kill. Polly, one of the street ladies was found brutally murdered not far from Andrea's Mission.

Is this the start of an RPG session? It sounds like it could be a fun story!

you beat me to it

This is brill. Making a book with this?

Hey you didn't say anything about Michelle

For a vampire site it's amazing how few have read or RP'd The Masquerade... it's also spelled "Toreador".

Thank you all for comments on my vampire member page. Glad you enjoy reading it.

Julian is off buying the Titanic

Let us know when you get everything together

Wonderful! Please keep going with this!!!

Don't like what's happening with Buddy. He's innocent I tell you.